Gamera Obscura: A Triple Feature of STRANGER THINGS, PETE'S DRAGON, and THE WITCH 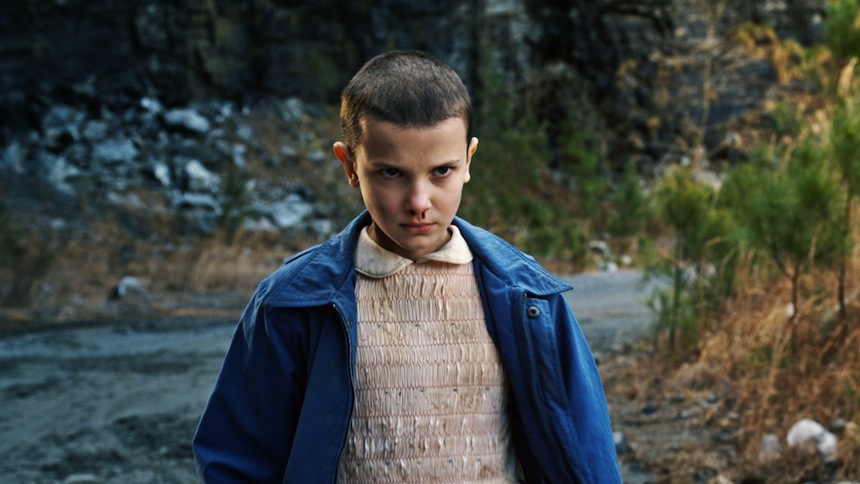 When you’ve seen way too many movies and TV shows, unlikely double and triple features start to suggest themselves. Any cinephile can tell you that—or, actually, they don’t need to. You know it already. How your brain is constantly programming, juxtaposing, matchmaking. Connections seem to form of their own accord, and the filmed myths we know and sometimes love take on the contours of a larger myth, its myriad faces presented by myriad storytellers.

The observation that Elle (Eleven) in Stranger Things and Eliot in Pete’s Dragon both represent Innocence is, perhaps, borderline facile. But their kinship extends beyond the topline metaphor. It’s evident in the details, too. In fact, only just now, when writing their names in the same sentence, did it strike me how similar those names are. Purely coincidental, I know. The rest I’m not so sure about. It’s more likely that these Netflix and Disney releases are essentially telling the same story, comforting us with the same bits of wonder and rediscovery, only geared to different audiences and achieving different levels of success.

Both Elle and Eliot are the subjects of a slow-reveal that drives the larger narrative—they’re in hiding for much of the story, never really at ease among the civilized, and concealed by children of about the same age (I’m guessing Mike is a year older than Pete). The inciting incidents in both stories are inversions of each other—a child goes missing mysteriously, and a mystery child is found—and that makes sense, for they go to slightly divergent places with the same material. What’s eye-opening is how both scripts use children to convey meaning about losing and recovering aspects of childhood itself. Because that’s what is often at stake for the adult characters: the love and grief they offer the missing/found kids is really intended for parts of themselves that they’ve lost. And those parts, upon further consideration, do not always relate to childhood per se, but rather Innocence. The state of being we feel we experienced during an earlier, better time. A period in which homes and families were still intact, and cynicism about life, romantic love, duty, and meaning itself apparently didn’t exist.

The woods, the mysteries that lie hidden in its darkness, and the untamed heart of childhood feature strongly, thunderously even, in both 2016 releases. And all of this, it belatedly hit me, is basically true of Robert Eggers’s The Witch, an earlier 2016 release that I greatly admire. The inciting incident once more is a child who goes missing. And again, there’s both a mystery in the woods, and a monster in the woods—and the beauty of all three stories is how they answer the question of whether the mystery in the woods is the same thing as the monster in the woods,

In all three cases the inciting incident thematically is an awareness of an imminent life-transition, either adolescence or, in The Witch, adulthood. That’s why Pete and Mike need to keep their secret friends safe, and away from adults. The extent that they do or don’t signals the extent to which they need to keep Childhood and Adulthood, as clashing forces within themselves, apart from each other. To those passing out of childhood—and those who recall it later, like us—the situation is like the unhappy meeting of matter and antimatter. Grownups kill Innocence, just as adulthood “kills” childhood. The “bad” adults in both Stranger Things and Pete’s Dragon literally want Innocence to be held captive and exploited as needed. The “good” adults, as alluded to previously, are on an opposite quest: to reclaim the Innocence that’s been lost. And of course culturally both stories aspire to do the same thing on the macro level through their combination of nostalgia and sentimentality. They speak to the collective desire to return to some earlier time where there was true power and magic lying in wait, and all the present-day issues, both in ourselves and externally, out there, weren’t around to get in between us and all of that pure, unrestricted awe.

Pete’s Dragon concludes with the kind of too-rosy reconciliation of its opposites that is tricky to pull off. Sure, it lands well with actual kids in the audience, and, I suspect, with the those who have miraculously managed to shield their own Innocence from the world, but to others it understandably comes across as trite. Stranger Things is its older teenage sibling. It acknowledges that transitions can’t be made without sacrifice, and in its final episode literalizes that sacrifice in the alleged service of vanquishing the monstrous. Yet I think that there’s something to the theory that Elle and the monster are necessary complements to each other, even sharing their beingness. It would then make sense that they both must vanish for all the other youthful characters to “come of age” since it would be impossible to retain the superpowers of childhood without its overwhelming fears. After all, as kids our wishful or “magical” thinking—here manifesting as telekinesis in the same manner as Marvel superheroes and Stephen King novels—is our primary weapon against the monsters in the forests of our minds. If we defeat the latter, there’s little need for the former.

The Witch, of course, is having none of this. The entire enterprise of transitioning out of Innocence is tantamount to the Fall all over again. In fact, that’s the brilliance of Eggers’s script: he acknowledges the social/psychological survival-value of a particular theology while also pointing out its devastating shortcomings. In Puritanism, there’s simply no way to navigate gracefully the transitions that adulthood demands. In this cultural scenario the losing of Innocence, both morally (as childhood “goodness”) and sexually, is so catastrophic that one must be forever on guard against the forces of corruption. And this constant vigilance paradoxically causes sin to become a focal point of life itself, to be ever-present in one’s consciousness. So in a self-fulfilling prophecy that is especially elegant, Innocence is lost because of the desperate measures we take to cling to it at all costs. That’s the dynamic that tears Thomasin’s family apart, and it naturally comes to identify the sacrifice that’s required for true growth: the family itself. As a character, “the witch” opens the movie by sacrificing the most innocent of all possible characters. By the ending it’s clear that a far greater sacrifice is needed—the idea of Innocence itself, meaning all that you loved and obeyed blindly… because you were a child and so alienated from your personal power that an alternative never occurred to you. Thomasin, then, is Elle, but in a sense reverses her choices—“Why should I vanish when the rest of you can? Why should I be a symbol instead of real? Why can’t I be real and everyone else be a symbol of holier-than-thou repression?”

Do any of these three screen stories “have it right”? Maybe. I don’t know. But I think that culturally we need all three positions staked out like this, in clear and compelling terms. Doing so keeps us honest, reminding us of the beauty and otherworldliness of authentic Innocence, but also of the price we pay, tragically, as we attempt to forestall its inevitable passing.

Gamera Obscura is a column about the ill effects of watching too many movies over too many years. Peter Gutiérrez also writes the Blockbuster Central column for Screen Education, and can be hunted down on Twitter @suddenlyquiet.