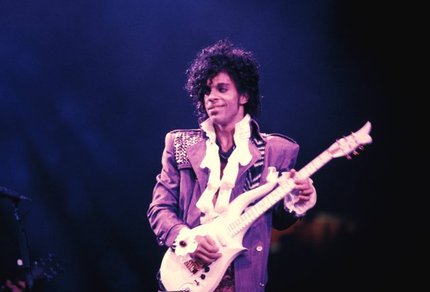 2016 has not been good for music fans. Prince, one of the greatest songwriters and guitarists of our age, has died at the too-young of 57, it was announced by his publicist today. Details of his death are as yet unknown.

He was born and raised in Minneapolis, Minnesota, and showed a gift for music from an early age. His second self-titles album went platinum, and over his career he sold over 100 million records, as well as writing hit songs for other artists, such as 'Manic Monday', recorded by The Bangles, and 'Nothing Compares 2 u', recorded by Sinead O'Connor.

Prince was no stranger to film. He contributed to several soundtracks, including Batman (1989), and Happy Feet (2006). For the latter film, director George Miller had wanted to use Prince's song 'Kiss', but wanted to change gender pronouns and needed permission, which initially Prince refused. Miller asked if Prince would at least watch the film first, and Prince agreed to a private screening at his home. When it was over, Prince loved the film so much that he asked Miller to give him a week to write and record an original song. That became 'The Song of the Heart'.

But it was Prince's own films from the 1980s that left his greatest mark in cinema. His first onscreen role was in Purple Rain (1984), as 'The Kid', a rising star in the music scene who struggles with his career and personal life. It's widely considered one of the best and most influential music films ever made, and it spawned several hit songs including the title song, 'When Doves Cry', and 'Let's Go Crazy'. The film grossed nearly $70 million, and won the Academy Award for Best Original Score.

One of the giants of music and a great contributor to music in film, his work will be missed.