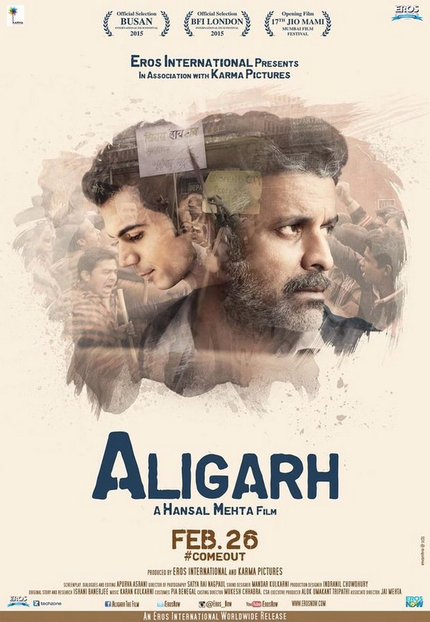 In April of 2010, Professor S.R. Siras died alone in a rented room. He'd been sacked from his job as the head of the department of regional languages in Aligarh, Uttar Pradesh, India. He'd been a professor of Marathi at Aligarh University for a little over a decade. He was respected. He was loved. He was gay. Guess which one of those led to his death.

In Hansal Mehta's Aligarh, we follow Prof. Siras through the final year of his life leading up to his death. One night, a pair of TV reporters burst into his apartment, where he was entertaining a man, and filmed them as they begged to be left alone. The ensuing scandal led to Siras resigning from his post, being ostracized from the community, becoming the center of a movement for gay acceptance, and eventually to his death by unknown means.

This film could very easily have been a hagiography of Prof. Siras, a man who had no real enemies. In fact, apart from a single facet of his private life, there was nothing about Prof. Siras that would be considered outstanding from an outsiders point of view. He was a teacher, he loved poetry, he enjoyed old Hindi songs and films, and he loved to read. He could've been anyone. He could've been you. He could've been me. Unlucky for him that he was who he was on that night in 2009.

The story of Aligarh begins with the story of cub reporter Deepu (Rajkumar Rao) of The Indian Express, who spotted a story about the Aligarh scandal and saw it from an unusual point of view. Whereas the papers were busy focusing on the scandal of a gay professor in a Muslim college, Deepu saw the story as that of a man whose rights had been violated when that TV crew burst into his private chambers late one night. Deepu fought for the right to tell this story, even as his editors claimed that it was a gay rights story, but Deepu saw it as more than that. More than a gay rights story, he said, this was a human rights story.

It is that thought, the idea that Siras's story transcends sexuality into the realm of a primal violation of human decency, that fuels Aligarh's greatest success. Hansal Mehta has made a name for himself in the west for telling the stories of real men on film. His film Shahid recounts the story of a human rights lawyer who was assassinated in Mumbai following his dedicated efforts to protect Muslims from persecution in India. This time around, Mehta tells a much lower profile story, but with no less power.

Aligarh triumphs in its insistence that every life is worth saving. The dignity of every person, no matter how seemingly insignificant, is worth fighting for. Prof. Siras never asked for the spotlight, and in fact, all he really wanted was to be left alone to teach, read his poetry, sing his filmi songs, and maybe have a bit of company or even a partner to love. He was denied those rights, and all because the person he chose to spend his private time with was a man.

Manoj Bajpayee plays Prof. Siras with a delicate nobility that betrays the profoundly unjust position he has been thrust into. The actor shows no fear in his portrayal of a man who is as confused by the world's condemnation of his private activities as he is unsure of how to deal with it all. Bajpayee is one of India's greatest working actors, and one of the few who can move freely between independent dramas like this, Gangs of Wasseypur, Chittagong, and others and the Bollywood world. Much of the film focuses on Siras's solitude, and therefore the camera lingers frequently on Bajpayee's face. These moments of silence, of reflection, of sadness, are what tells Siras's story better than any dialogue could.

Professor Siras is dragged not only out of a closet that he wasn't really that sure he was ever in, he's also dragged into a limelight when the story goes national that he never wanted. In his own eyes he wasn't a gay man, or as he says, "the gay", he was just a man, and that's the tragedy that this film conveys so empathetically.  Between Mehta's delicate direction, Bajpayee's powerful, yet gentle, portrayal of a man betrayed by a world with which is sought no battle, and Rajkumar Rao's enthusiastic counterpoint to Siras's tranquility, all angles are covered.

Prof. Siras was not Harvey Milk, a man who actively fought for the rights of gay men and women. Prof. Siras was not Barney Frank, a voice for the powerless in the corridors of power. But, Prof. Siras was a man and a human, and he deserved as much dignity as as any other human, even if he wasn't shouting it from the rooftops. Aligarh is some restoration of that dignity, sadly too late for the professor's needs, but perhaps just in time to save someone else.

In the United States in 2016, there are at least a dozen states that have similar laws.

Aligarh is not an Indian story, or at least not uniquely Indian. These things happen everywhere, every day. It is a story that needs to be seen and understood by everyone. It is not flashy, it is not aggressive, it is, however, infuriating. It is infuriating because it shows how prejudice and bigotry can destroy a person whose only crime is trying to be happy. Aligarh is a perfect requiem for a man who just wanted to be happy, and for that simple wish he died. See Aligarh, you owe it to yourself and those around you who are just looking for their own peace.