Review: I SAW THE LIGHT, Cheatin', Drinkin', And Singin' 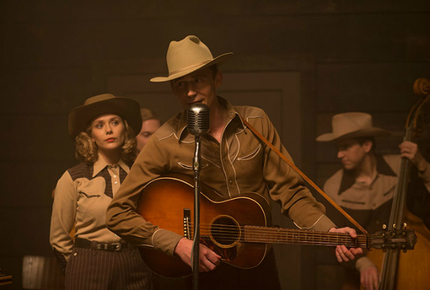 Twangin' Tom Hiddleston lights up the screen whenever he sings as country music legend Hank Williams in the biopic I Saw the Light, which plays like a dramatization of a Wikipedia entry.

A sense of doom hangs over the picture, since it's no secret that Williams died young in the early 1950s. Rather than focusing on the bright spots of Williams' life and career -- as nicely handled in The Buddy Holly Story (1978) and La Bamba (1987), to cite two of many examples -- filmmaker Marc Abraham furthers the bleak impression by choosing a curiously dry path that is rarely compelling.

Drawing from Colin Escott's book Hank Williams: The Biography, this is the first produced screenplay by Abraham, a veteran producer who made his directorial debut with Flash of Genius (2008). While it includes a number of significant historical and personal moments for Williams, it rarely digs deeper than the dates and places that appear on-screen to mark the individual episodes.

At a certain early point, for example, Hank's wife Audrey Williams (Elizabeth Olsen) angrily tells him off for his cheatin' and drinkin'. But other than a strong drink in his hand and a lusty stare at another woman, no visual evidence has been presented to back up Audrey's claims. Indeed, the overwhelming prevalence of "tell, don't show" incidents in the narrative is reminiscent of television dramas hampered by limited budgets. Yet the dialogue itself is prosaic, and the staging and framing of the talk-heavy scenes is perfunctory. Shapeless and inert, the dramatic sequences serve to inform rather than enlighten. The film begins (basically) when Hank and Audrey get married in the 1940s. What drew the two together in the first place (Audrey was married with a young daughter when they met)? Why is Hank's mother (Cherry Jones) so suspicious of his new wife? Why do Hank and his mother remain so close? Why does Hank begin cheating on his wife? Why does Hank drink?

The final question is the most difficult to answer and yet the most fascinating. Hank suffers from periodically severe back pains, first depicted very early in the proceedings. Did he begin drinking to alleviate his physical suffering and then fall into addiction?

Williams lived at a time when alcohol addiction was not understood as an incurable disease. In retrospect, the tragedy of his circumstances becomes more apparent and heartbreaking, though the film tends to flatten out and shortchange the dramatics in favor of letting history march onward.

I Saw the Light shines in its recreations of musical sequences, gloriously photographed by Dante Spinotti. The artful work of production designer Meredith Boswell, art director Rob Simons, and costume designer Lahly Poore-Ericson is impressively displayed in the crowds of performers and audience members at radio shows and concerts, as well as in the domestic sequences.

Hiddleston's charisma emerges during the performances, showing the dynamic side of Hank Williams that must have wowed everyone who saw him perform. Olsen supplies plenty of kindling to stoke the fiery primary relationship. Williams' mercurial extra-marital affairs are represented by the age-appropriate Wrenn Schmidt and the young Maddie Hasson, who both do fine within limited possibilities. Bradley Whitford is a musical executive who hovers on the sidelines.

Other than the enjoyable musical performances, however, I Saw the Light is a downbeat and dour experience, which makes it distinctive from other musical biopics, but without any concurrent insights that would make it truly memorable.

The film is now playing in select theaters in New York, Los Angeles and Nashville. Via Sony Pictures Classics, it will expand to other cities across the U.S. on Friday, April 1.

I Saw the Light