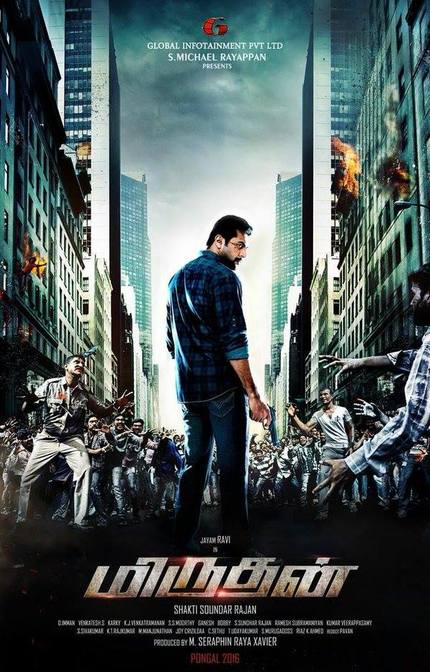 In India, horror films have typically been the red-headed stepchild that no one really talks about. Yes, there are some great b-movies from the '70s and '80s, but the mainstream has largely ignored the genre as inconsistent with the studios' mission to deliver as many emotions as possible in a single sitting. In Bollywood, the Hindi film industry that is the dominant cultural force in the subcontinent, horror films almost never get made, and when they do they are typically ultra low budget affairs. However, there is one regional film industry that has embraced horror as a staple of a balanced multiplex, and that is Tamil Nadu's Kollywood.

As recently as a decade ago, horror was largely verboten in Kollywood, but then in 2011 a major watershed moment broke that barrier and the flood gates have opened. In that year a mid-range movie star named Raghava Lawrence released a sequel to his middling ghost story Muni. While Muni (2007) was a reasonable enough success, it's sequel Muni 2: Kanchana was an absolute stunner. Its insane mix of comedy, romance, music, and balls-to-the-wall insanity, in the form of a vengeful transgendered ghost, ushered in what has become one of Kollywood's most dependable genres, the horror comedy.

In every year since then, the industry has seen at least two, and sometimes as many as five or six blockbuster horror comedies roll through the cinemas. Hell, even a few straight faced horror films have made the grade, though they are not as forceful at the box office as the comedies. However, the films have begun to become repetitive as the specific subgenre that seems to get green-lit the most often is the ghost story. Perhaps its because this is the one supernatural horror element that is most familiar to Tamil audiences, but over the last five years alone, the industry as produced films like Kanchana, Kanchana 2: Ganga, Darling, Pisasu, Massu, Aranmanai, Aranmanai 2, and certainly even a few more that I've not even heard of.

While the genre is growing in popularity, the narrow focus has begun to feel stale, leading to diminishing returns. No one had really given any serious effort to breaking from the ghost story mold. That is, until now.

Fast forward to 2016. While ghost stories are old hat in Tamil Nadu, no one has ever tried a zombie film, in fact, in all of India the total number of zombie films made in the mainstream studio system could probably be counted on one hand with the only previous significant success being Saif Ali Khan's Go Goa Gone, a film I adore. Well, the age of the Tamil zombie film has begun, and director Shakti Soundar Rajan and screenwriter S Michael Rayappan have struck gold with their creation.

Miruthan is Tamil Nadu's first zombie film, but rather than simply attempting to crib from Go Goa Gone's success, these filmmakers are looking further afield for their inspirations. This film fits in very nicely with the post-2000 wave of survival horror films that horrified American audiences both with their visceral approach to violence and their loose adherence to accepted zombie norms. However, Rajan is not content to merely ape foreign fright films, instead he very firmly plants his cinema in the accepted regional tropes of popular Kollywood films, creating a potent and completely unique mixture that is unlike anything Western audiences have seen.

When films like 28 Days Later and Zack Snyder's Dawn of the Dead remake introduced running zombies there was a sizable contingent of the horror community that was outraged. However, as time has progressed, those waves of dissent have subsided and what was once blasphemy is now simply another point of view. Similarly, Miruthan takes accepted zombie mythos and cultural ancestry and reshapes it to fit the growing concerns of modern India, a space in danger of growing beyond its means to control itself.

In Miruthan's world, zombies are created from leaked toxic waste, ignored by the handlers in order to avoid prosecution. While this is a familiar trope in horror films -- see Return of the Living Dead, Bio-Zombie, The Host -- it is also indicative of India's insidious corruption and the desire to simply sweep problems under the rug in spite of the growing focus on the nation as the world grows more and more interconnected. A cursory glance at any of India's leading news sources on any given day will yield a plethora of violations of public trust, corruption, violence against different castes/religions/genders. Miruthan trades on this distrust of authority and does it in a way that feels absurd to foreigners, but all too familiar to locals.

The hero of our story is Karthik (Jayam Ravi), an ordinary traffic cop whose only concern is the welfare of his sister. The pair were orphaned when young Vidya (Anikha Surendran) was an infant, and since then Karthik has avoided danger at all costs so as not to leave Vidya alone in the world. However, when his attempts to do the right thing while simultaneously keeping his head down fail as a fellow cop breaks ranks to help an hospital bound woman tied up by a traffic stop for the local Minister, Karthik steps in to protect his colleague and roughs up a few of the Minister's goons, earning himself the ire of this particular politician, which leads to further trouble for everyone.

When the zombie apocalypse, in this case treated as a rabies-esque infection, finally breaks out, Karthik becomes seperated from Vidya and absconds from his official duties as an officer of the law to find her, along with his best friend Malai. In doing so he stumbles upon a secret hidden den of doctors visitng Ooty -- where Karthik and Vidya live -- who think they may have the answer for the city's rapidly deteriorating situation. To do so, they must make it out of town to Coimbatore, the nearest unaffected major city, in order to synthesize a vaccine/cure. The science is a bit cloudy, but it is really a means to an end, which is the get Karthik, the newly rescued Vidya, and Karthik's blooming love interest Renu (baby faced Lakshmi Menon in a largely innocuous but perfectly serviceable performance) on the road.

As the film progresses, you can almost feel Rajan checking off his influences with each passing action setpiece. There are the nods I mentioned above, a medical van plowing through acres of zombies a la Land of the Dead's Dead Reckoning, the mall full of zombies from either Dawn of the Dead film, and on and on. However, with the execution of the film Miruthan never feels like it is stealing, it is rather appropriating the best parts of great films and translating them to the Indian cultural experience.

Miruthan never stands still for too long, and it never takes itself completely seriously. Whereas so many recent Tamil horror comedies have failed critically when relying too heavily on comedy to keep the audiences attention, Miruthan acknowledges its origins and its audience and creates an unusually effective and relatively even mix of the new and the familiar. Yes, there are songs, there are absurdist comedy tracks, there are fat guys who are funny mostly because they are fat and make ridiculous faces, but deep at the heart of the film there is a true desire to succeed in a way that no Tamil film has ever attempted.

This film encapsulates what is best about good populist Tamil entertainment. It identifies its audience, creates a world in which the audience feels confortable and familiar, and then it subverts their expectations and takes them on a wild ride. Where the film succeeds, I think, unexpectedly, is that it both exemplifies and transcends regional entertainment by telling a universally popular story that includes locally acceptable tropes without alienating potential outside audiences.

Some Tamil films go overboard with the comedy tracks, bloating films to three hours or more while excessively beating a dying horse with subplot after subplot and infinite flashbacks. However, Miruthan is a lean, mean, zombie punching machine, and when it turns from a gripping comedic survival horror film into a science fiction horror heroic bloodshed picture in the final reel, it has definitely earned what little sentimentalism it wrings from its ridiculous blood soaked tragedy.

Miruthan does what Hollywood has become scared to do, it places a regular guy into an impossible situation and forces him to rise to the situation. With actors like Dwayne Johnson, Chris Hemsworth, Robert Downey, Jr. and other similarly insane charicatures of real humans taking on the hero roles in Hollywood these days, it's nice to see a guy develop an arc of his own without a particularly quick wit or chiseled physique.

Jayam Ravi is the everyman. Karthik just wants what is best for his sister, he does not have quick one liners or biceps bulging from his uniform. Hell, unlike most modern Indian movie cops, Karthik even wears a uniform that is the proper size rather than three sizes too small a la Dabangg. Karthik's demeanor moves from cautious and often downright goofy -- as in the film's primary item number Munnal Kadhali, where a visibly smitten Karthik headbutts and chest bumps a heavy bag in the throes of romantic ecstasy -- but never is he any more capable of managing a situation than you or I would be. Jayam Ravi is not the great actor, and frankly feels a bit lost in some of the scenes where tension begins to build, but his insecurities are our own, and so are his victories.

Shakti Soundar Rajan and his producers took a huge risk in creating Miruthan. This is a subgenre of horror that Tamil Nadu has no history with, and even with Kollywood probably being the most tolerant of Indian regional cinemas in terms of experitmentation, it was never a sure thing. However, this film is an absolute home run. Intense when the circumstances require, ridiculous in all the best ways, and never boring, confusing, or precious for even an instant, Miruthan is possibly the best Indian mainstream horror film, comedy or otherwise, of the last decade.

Do you feel this content is inappropriate or infringes upon your rights? Click here to report it, or see our DMCA policy.
Shakti Soundar RajanJeyam RaviLakshmi MenonKaali VenkatR.N.R. ManoharActionHorror