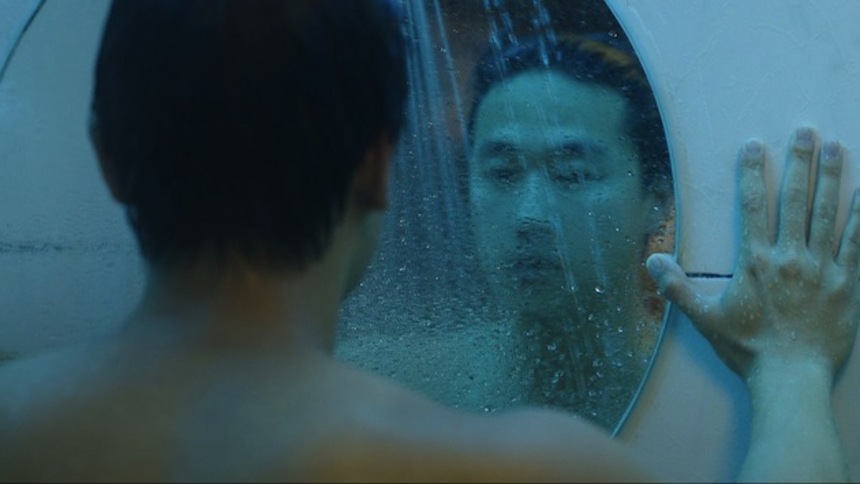 Much like its lead, articulation has failed me in the days since watching and processing Andrew Ahn's glorious Spa Night. The film presents itself with such ease and confidence that its easy to miss its complexities at first glance. A friend of mine who saw the movie with me said it in another way, "It's like a masterpiece painting that you could miss in a museum if you weren't looking close enough. It's not showy in it's honesty." In his own way Andrew Ahn does join the tradition of the unshowy American writers whose complexities are obscured by their simplicity: Tim Dlugos, Brenda Shaughnessy, Essex Hemphill.

Shrouded in loose towels, steam appearing and disappearing about them, two men struggle against the weight of the atmosphere in the room: "Dad, I can't breathe," comes one voice. After a pause, there is an inhalation then a father responds: "Just a little longer". So begins, Spa Night, a lonely, stalwart meditation on how we learn to live, to breath when the environment we find ourselves in is weighed down by forces visible, yet invisible. For David Cho (Joe Seo), our protagonist, that environment is the male body--his own and those of his peers--and the visible invisible force is desire.

The two men are a father (Youn Ho Cho) and son having a pre-scrub steam at a Korean spa in Los Angeles, and as the gorgeous sequence that serves as prologue to the film unfolds the hints to the journey we are about to go on are whispered in a moment of calm restraint: David, in front of his own locker, begins to undress in the foreground just as a new man undresses just out of focus behind...as the thought to glance over consumes David the camera cuts to a title card.

For most Americans, shame and discomfort color our relationship to our bodies. It's taught to us early and we carry it with us for most of our lives. For queer men, our shame and discomfort can come squared: what is another male body but a comment on or reflection of our own? To those outside of the community this neuroses seems bizarre, if admirable.

After arriving back from the spa David begins to immediately do crunches as his mother (Haerry Kim) looks at him quizzically. In fact, David has picked up a litany of new rituals that involve his body: he runs every morning through Koreatown, he does push-ups at night all alone, and he takes nude selfies in the bathroom mirror all with the same, quiet dissecting discomfort. In the spa, though, there is freedom and a reconciliation of our bodies' relationship to those of the same sex as we are thrust head first into a realm where perfection and imperfection are juxtaposed and made equal.

My first experience at a spa opened me up to my body and my shame. At Wi Spa in Los Angeles my insecurities were scrubbed away slowly and methodically before falling away like all the dead skin that ended up on the hand scrubber of the man who moved from my back to my inner thighs indiscriminately. Over the course of Spa Night the same begins to happen to David when his parents lose their business and he must get a new job at a small spa to help pay for his expensive SAT Prep classes. In the low light of the spa, his insecurities with his desire for male-male intimacy start to rise to the surface like a new skin. Slowly shame and discomfort begin to fall away. Furthermore, within the spa, the first of many ponderous complexities Andrew Ahn introduces in this narrative begins to become clear: to what extent is our projection of queerness indebted or influenced by those in the West?

Hilton Als, in the essay "Michael" from White Girls, states: "...there's the bizarre fact that queerness reads, even to some black gay men themselves, as a kind of whiteness. In a black, Christian-informed culture, where relatively few men head households anymore, whiteness is equated with perversity, a pollutant further eroding the already decimated black family." The same could be said of a first generation Korean-American navigating a Christian-informed culture. When David's mother sets up an overnight visit with a church friend's son currently at USC the first thing we hear upon entering the dorm room is something to the effect of: "Yeah he's white but he's never here. He spends most nights at his boyfriend's house." David looks at the bed with a twitch of longing as his childhood acquaintance raises his eyebrow and sighs dismissively. Even the first men we see engaging in illicit acts at the spa are Western men. How can one know one's own desires are real if the only reflection are in the bodies of an other?

This is only one of many complex and beautiful exploration's in this vital debut by Andrew Ahn. The lives of a first-generation family are explored alongside questions of how one functions as a "good Korean son". An image that stays with me as I write this is of a young baby participating in a Doljanchi, a Korean baby naming ceremony. As the young boy reaches down and grabs a dollar that sits amongst many other flashy and surprising objects the crowd erupts and David's mother exclaims: "Oh this means he will be a very rich man!" When David asks his parents what he picked during his ceremony both parents grow quiet and his father walks away. His mother says, "I don't remember", and a mystery is left for us to parse.

Mystery, at times, feels like a type of inarticulation in new stories, yet the mysteries at the fore and core of Spa Night haunt us like secrets we've left unspoken. With the help of nimble cinematography by Ki Jin Kim and a breakout performance by Joe Seo, Andrew Ahn builds to one of the most immediate statements on the function of the "coming out narrative" in a post-#LoveWins landscape. This is a film with an unparalleled artistry and simplicity that I fear could be passed by for its showier counterparts, because of it's subject matter and Korean leads. People tell me all the time that our industry isn't homophobic or racist. Let those who aren't stand up today and prove me wrong. This is the America I see everyday in Los Angeles that is rarely reflected on my screens and it's time that that changes.

Do you feel this content is inappropriate or infringes upon your rights? Click here to report it, or see our DMCA policy.
andrew ahnjoe seoki jin kimspa nightSundance 2016