Hamburg 2015 Review: THE TREASURE, Or, How To Love An Illusion 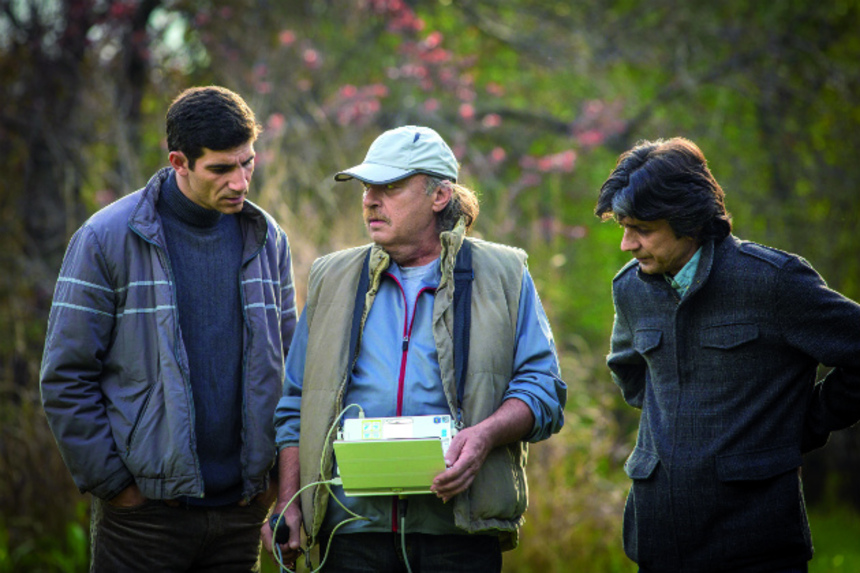 Corneliu Porumboiu, the Éric Rohmer of Romania's Nouvelle Vague, is Europe's answer to Hong Sang-soo. Where to go from such a first sentence? We will see. What about The Treasure, his latest exercise in time? We talk about the time things take, the time as history, the time of humour and dead time. But what we also talk about here is how to love an illusion and the illusions of love: Porumboiu's first fairy-tale. Of course, it is about disillusion.

The first striking thing about The Treasure is its seemingly formalistic simplicity compared to the last two films of the filmmaker, The Second Game and When Evening Falls on Bucharest or Metabolism. No, The Treasure is not a simplistic film but it is very clear that Porumboiu focuses more on his narration again. Nevertheless he has not lost his tendency for self-reflexive gestures.

It all begins with a mistake and the worst of all disappointed loves, the disappointed child. The guilty father is Costi, who was late picking up his son. One can see the following story, as the search of Costi for something that makes his boy happy again. Naturally, it is more difficult than that.

We deliberately should speak of story as Porumboiu has made this film as a reaction to the disappointment of a documentary approach, when a friend told him about a treasure in his garden. Porumboiu stated that the actual search for the treasure in the garden was too sad, so he decided to make it a fiction, a comedy.

But the borders between comedy and abyss are small in Romanian cinema. There is a light tone to The Treasure but still a lot of sadness and political awareness. The comedy here might be even harsher than the sad story behind it. One day Costi's neighbor tells him about a treasure that could be buried in a garden that belongs to the neighbor's family.He asks him for help as he hasn't got the necessary money for equipment.

Now things start to get complicated. They need more money for a metal detector, they learn about the laws concerning found treasures and they need excuses in work. One can be very much in love with those passages in which Porumboiu once again proves his immense eye on the daily frustration of relationships and work. It is his feeling for time that is at work constantly. He finds humour and cinematic richness in the moments we have to wait or walk.

Despite those merits "digital" doesn't really work for Porumboiu. His images seem somehow tired and shapeless. But then, this time he seemed to be more interested in narrative structures and perceptions of illusion.

The actual search for the treasure is amongst the most funny things of the year. The metal detector man, a strange, cigarette smoker who works a a metal detector man in his real life, is, well, amazing. He is one of those characters one immediately recognises as unforgettable. The way he slowly moves through the garden, captured by Porumboiu in long takes from distance to make us feel the absurdity of the endeavour, is always in the uncertain: Does he know what he is doing or not?

Moreover Porumboiu uses the house and the garden as a possibility to talk about Romanian history and its disorientation again. The question of how to relate to the past keeps popping up in his oeuvre and it is astonishing how he always finds unusual ways to talk about national identity.

Those scenes in the garden are in some way related to the cinema of Hong Sang-soo. The way (national) archetypes are put into strange but daily situations, the way the promise lies already in the meeting of two persons, their talk, their habits perfectly works together with the self-awareness of the storyteller, who are Hong and Porumboiu and who clearly tell to give us a lesson that doesn't really teach anything. It observes.

This is way the moral of the film can only be the irony of life. In a stunning last shot the illusion becomes real and destroys. There is so much going on in this shot, that suddenly moves, moves to the sun (not the son!) that we can't possibly talk about it in a singe review. Let's just state the following:

Porumboiu's first feature 12:08 East of Bucharest was also a fairy-tale, but it was much more about a fairy-tale than anything else. The Treasure is more or less the exact opposite. Here Porumboiu shows a world that wants to believe whereas in his first feature his showed a world that does not care what to believe, that has other problems. Maybe the problem now is that there isn't anything to believe in? It is a dangerous thought and Porumboiu is very clever to show the effects of those illusions, we could call it the illusion of an illusion, where anything loses its value as soon as it becomes real.

Porumboiu is one of the few filmmakers working today who aims for a film to look very simple, very easily done, but when we look closer, we find his work to be among the most challenging and eclectic in contemporary cinema.