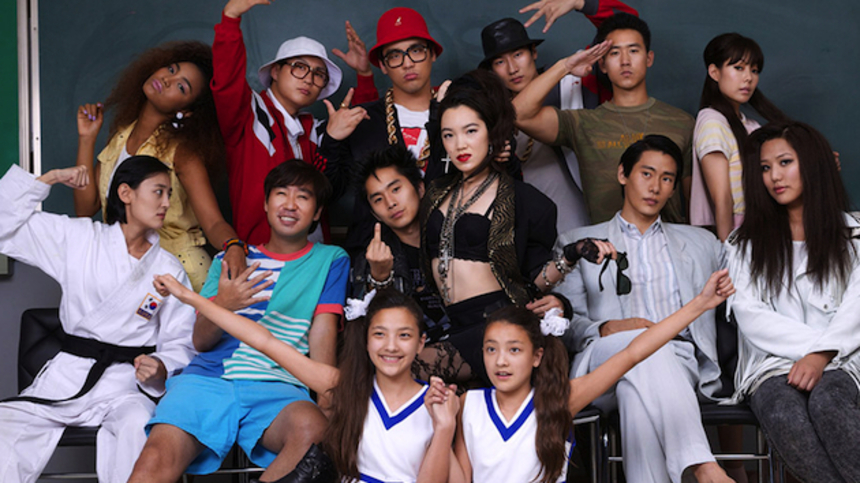 In 2015, it seems Americans cannot escape the politics of identity. From Caitlyn Jenner to the wage gap to even Rachel Dolezal's complicated and troubling relationship to the hashtag #BLACKLIVESMATTER, each week seems to bring some new story asking Americans: "Who are you?"

It's curious then, that this same identity crisis isn't happening in the world of film. Yes, along the festival circuit there have been glimpses of hope in heralded films like Dope, DOPE, and let's not forget #DOPE (God, isn't Dope just wonderful? And so diverse too!) There has even been a blockbuster that seemed to examine its own identity and that of its audience in the stunning Sapphic fantasia, Mad Max: Fury Road. But for the most part, Hollywood has seemingly ignored the cultural conversation in favor of drinking beers in the basement and waxing poetic about the good ol' days --flipping through comic books and playing with old dinosaur toys. Meanwhile, letting cinema is letting his over-achieving little sister, Television, get her hands dirty in the muddy waters of liberal arts self-discovery and cultural critique (this year's Emmy nominations are veritable smorgasbord of talent of color).

That's why Benson Lee's new film Seoul Searching "gave me so much life", as we Queens (speaking of identity) say of the truly revelatory. After months of ingesting works that, while fun and enjoyable, left me feeling empty; Seoul Searching served me the five course meal my body almost couldn't take. I guffawed with abandon, shivered through tears, and let out a guttural "YAAASSS!" that could rival my Bitmoji's. It wasn't until the lights came up on me and I led the standing ovation that I realized that this was the first film about Korean-Americans I'd ever seen on the big screen.

The film, based on Lee's own life, transports us to "Seoul, Korea 1986", the last year of a government funded summer camp for the children of Korea's post-war emigrants. The country doesn't just want the kids to leave the camp knowing who they are, but they also want them to have a grasp on the much more unknowable: "What it is to be Korean".

Being teen-agers many haven't even started to figure out the first question. Most, in fact, come to camp essentially as stock 80s archetypes: the valley girl, the bully, the rebel. Our entry into this world that's so vibrant it would make John Hughes eat his shorts is Sid, a classic American punk. Sid may not know who he is, other than a fan of that more vicious Sid, but he does say he knows what it means to be Korean: "Being Korean means being punished for not knowing what it means to be Korean". And with a readjustment of his archetypal leather jacket the theme of the film begins to crystallize.

In a world that wasn't ready for them (and still isn't...this is only the 3rd major American film in over 20 years about the Asian-American experience. The other two are 1992's Joy Luck Club and 2002's Better Luck Tomorrow) the sons and daughters of Korea had to either hide behind their culture and face abuse, erasure, and ostracization. Or they had to adopt the identities of the dominant culture as a shield against forces both without and within. To be a minority in a foreign land is a no-win game, as is being a stranger in a familiar one. The pressure on this film to be everything and more for the Korean-American community is huge. At my screening, a line stretched no less than a quarter mile down the street. There is a palpable thirst for this type of representation that is not being quenched. Pressure of this magnitude would undo a filmmaker of less panache than Lee, yet that which could have been the film's biggest downfall (the need to give due diligence to every facet of the first gen Korean experience to an ensemble cast from around the world) elevates the film to heights few teen comedies have reached for me. In many ways, it reminded me of Spike Lee's criminally underrated Get On The Bus, which showcased the cultural diversity of the black American male.

Every character in this film is so densely drawn you leave the theatre feeling as though you've spent a whole summer at camp, too. There's Grace, the seductive preacher's daughter who's learned all her tricks from Madge, played with tender focus by Jessika Van (there's a scene with Grace involving a bottle of Johnny Walker that's so delicious, I am now placing it in the canon of great scenes from coming of age teen comedies). There's the unabashed military school racist Mike Song played by the frightening Albert Kong who is just as comfortable calling his fellow campers "chinks" as he is calling them "porch monkies" and "nigger lovers" for styling themselves after Run DMC. And the crowd-pleasing Korean-Mexian lothario Sergio played with endless effervescence by Korean-Spanish YouTube star Estaban Ahn.

Seeing the diversity and complexity of a community so ghettoized by the mainstream media is radical enough but it's how Lee handles the psychic pain the community had to overcome after the Korean War that is the true game changer. Because at the end of the day isn't that what identity is all about? Recognition of a community's collective trauma. That's what it means to be Korean; and that's why while marveling Shirley Kurata's stunning costumes or the dancing to the film's dope soundtrack you won't be able to stop thinking about Rosalina Leigh's Kris. Rosalina, a Canadian actress in her film debut after being discovered on Facebook, gives a career sealing performance in a scene that proves to be the heart of Seoul Searching.

Traveling to Korea at the behest of her white adoptive parents, Kris feels that maybe if she sits with her birth mother she will find some clue that can lead her to the path of knowing who she is. Kris, sitting across from her birth mother who doesn't speak a word of English, begins to describe to her mother the pain of imagining who you are and who you could've been a thousand miles away as her mother shivers with an understanding that needs no translator. It's a breathtaking scene.

In a time when it is becoming apparent that the sickness of white supremacy and interracial discord is flaring up, in both dark and light spots around the world, it is imperative that Seoul Searching and films like it be seen. And not just on VOD or on Netflix. PUT THIS ON THE BIG SCREEN. Seoul Searching is the medicine the world needs right now. That way when we are asked: "Who are you?" We will be one step from being able to say: "Sid" "Sergio" "Grace" "Kris"...

Do you feel this content is inappropriate or infringes upon your rights? Click here to report it, or see our DMCA policy.
Asian Film Festival of DallasBenson LeeKorean-American Film