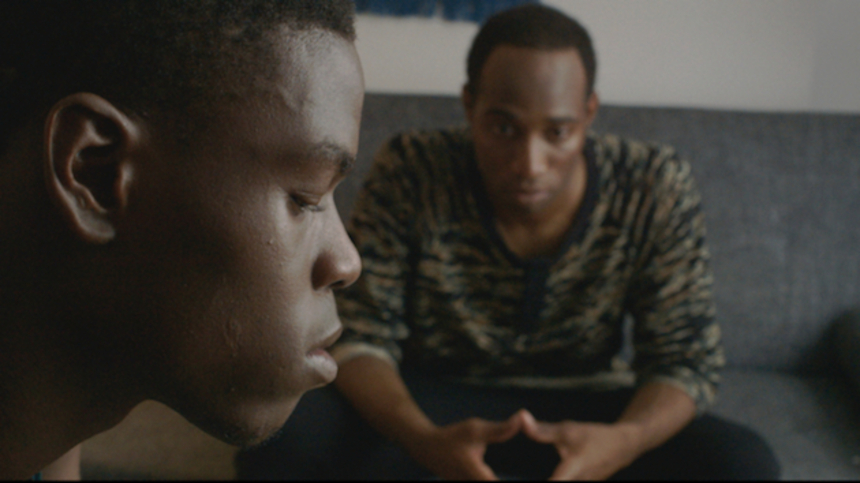 The two kids pictured above, the leads in Jay Dockendorf's Naz & Maalik, are Muslim, gay, and black -- in Bed-Stuy, no less.

As an audience member you fear for them. Only to realize that they are one step ahead of you. To embody all three of these identities is to walk with a strength only fear can grant you. Yet, Jay Dockendorf doesn't give the beautiful young men at the center of Naz & Maalik any chance to register that fear as they move through the city hawking their wares, saving up for a chance to get away. Around every corner is a threat that could dismantle their lives: an FBI agent who has been following them for days, a family member who may have seen them kissing on a passing train, and a white man who just wants them to come upstairs for a minute. In many ways the film is about how young men of color must shed the armor they use to protect themselves in order to deeply connect with others. As the film drew to a close I found myself wondering what armor I still carried that was unconsciously shaping all the relationships in my life.

Earlier this week I had a chat with Jay about his film. Jay speaks with the authority of a college professor and with the candor of an old friend. During our chat we discussed the implicit political act of showing two black boys walking and alive, the white gaze, and how he dreams of working with Katy Perry.

ScreenAnarchy: I was so charmed by your film. And taken by it. I thought it was so lovely.

Yeah. Especially as someone who has spent a lot of time in Bed-Stuy. When I saw them at the Nostrand stop I got so jazzed! Speaking of, something that caught my eye was the motif of the passing trains. It almost felt as though it was a hint to the audience about how you may have fallen in love with these characters. It was as if you'd seen these two men that you dreamed a film about. How did you come to write about these two boys?

The motif of the passing trains has everything to do with the way I came to start this film. When you're on a train sitting there, seeing all these other people on the train who aren't you, you sort of...I grew up in Los Angeles where I drove around in cars, was driven around in my mom's car, and I didn't really get a lot of exposure to the faces of other people except through film.

And then you're mostly, as a young person, being exposed to the faces of movie stars, and you do see the faces of your friends but your friends look like you and are largely from some organization or category of which you also belong. But the subway system of New York disrupts that system of familiarity. And riding the trains when I first moved to New York and reckoning with people with unfamiliar faces, people from unfamiliar categories shook me, I guess. And that prompted the impulse to make this film.

This particular set of characters, in this particular film was born of the experience of subletting an apartment from a closeted Muslim man. He and his partner were out to his friends and out to me and happily in love. They were grad school students and professors, but he was not out to his family and the drama of that, the relatability of that... The sense of that that came from living with him, and in that short period of time becoming friends created an environment that was almost ready-made for presentation.

So I asked if I could interview him as the basis of a screenplay and that let me get to know what it would be like to be a young gay Muslim man. The characters that I ultimately wrote were a great deal younger than my roommate at the time I interviewed him so the final screenplay is only loosely based on a true story. It' s not even remotely based on a true story of my roommate's life, but the interiority of the characters is.

Wow. That's awesome. I'm really interested in, like, lenses of representation. How we shape narratives that represent different worlds because we are in a very interesting moment right where I feel like stories that have been historically marginalized are coming to the forefront more often. You spoke about how moving to New York, and getting on the trains, and having that person to person interaction woke you up to things that weren't familiar...What did you as a California boy learn about yourself while making this film about two black gay Muslim boys?

I think that the project of representing characters whose backgrounds come from a life beyond that of the author is an interesting one and a difficult one and a relatively sacred one as well. It's not something that should be taken lightly and is not something that I think has been developed into a formula that works for every circumstance. Yet, we recognize that there is a way to do it well and there's a way to do it poorly we tried to tailor our approach for this particular subject matter and this particular film and it expanding into a few directions.

The obvious one is that a lot of research went into the creation of the script: I watched documentaries on gay Muslims, I watched films set in Bed-Stuy that I felt had captured the energy of what it is like to live in Bed-Stuy on a day to day basis for many years. We spoke to anyone and everyone we could during pre-production whose own lives overlapped in some ways with the lives of the characters to bolster the sense of authenticity. Particularly there were people I know of the Muslim faith who were helpful at evaluating my early drafts and providing feedback on hiw well I had communicated a natural rapport between a Muslim mother and her son, or two Muslim friends talking day to day. It was an undertaking.

We wrote this movie and made this movie when there was a great deal of frustration I think, in the news, about misrepresentation and so we have done our very best to learn and respect any aspect that could be considered near and dear to anyone.

﻿You can definitely feel that care and understanding in every frame of the film, so thank you for that. Another formal or...emotional element that I really liked about the film was that in similar ways that you walked a tightrope between documentary and narrative filmmaking, you also made a subtly political film that danced with overt politics.

Yet, the subtle politics in it were more about young black maleness. There is the larger framework of this FBI surveillance and talk of drones, but the parts that felt the most political to me in your narrative were just the scenes of these boys walking together in defiance of this city that in some ways doesn't want them. Can you talk about the politics of that? What sort of conversations were being had on set because I'm sure you guys were filming and editing during the Mike Brown, Eric Garner stuff, or Trayvon Martin at least--

﻿Yeah, yeah Trayvon Martin was happening then and Edward Snowden revelations were in the news throughout and this created an environment where it was impossible not to talk about these matters as a team. Especially in conversations between the central cast members, the producers and myself...the cinematographer also and our editor Andy Hafitz, who edited almost throughout our production schedule.

All these conversations informed a sense of black maleness that we were comfortable standing behind as a team. I really tried not to overtly put too many of my own politics in the film because I don't think my own politics are particularly interesting or original, but the feeling that the story can evoke or brush up against for other people is what we wanted to do. I think we wanted to engage with other people without ever really showing our own hand or bringing our politics. I think a lot of what Naz and Maalik talk about are in quotation marks, because they are their opinions not my opinions.

We recognize that we are a part of, what I like to think of, is this ongoing case study in how to adapt to changing expectations of what a story should contain and what a great original story honestly contains is a truly scintillating narrative to hold. As part of that, I was fortunate to have a team that through and through was comfortable shooting the entire pre and post production process as a laboratory for ideas that ended up on the screen.

﻿There was a moment that was very specific to me being a queer black male and we've been speaking a lot about specificity. That moment was what I've been calling the Moment of the White Gaze which is the scene that takes place on the street with the beanie babies. Can you talk about that scene? What have the reactions been to it? It was so insightful because that scene for me had some of the most palpable question marks.

﻿﻿Right. I'm happy to talk about it. I think that scene was our way of incorporating some sense of reasonable doubt about the intentions of newcomers to a historically black neighborhood and community. In particular, a newcomer whose presence who would reasonably have effected our curious young character Naz, who is discovering his libido, discovering his powers, deciding how to use those powers of conversation and seduction.

I also wanted to create a sense of conflict between the two of them that could revolve around a third person and I felt like this character, the apartment owner, was a provocative signifier for the two of them and the audience as well who might be suddenly bolstered by seeing an unfamiliar face that was possibly more familiar in their own personal narrative.

The goal next for this film is to expand the reach to the point where anyone who wants to see the film can see it. Right now we are sorting through all the ways that could happen. We will take the film to some other festivals in America and hopefully abroad as well. I look forward to premiering the film internationally and having audiences from various different backgrounds be able to see the film as well. It's amazing that in 2015 a movie can be released on VOD and suddenly be accessible to anyone in the world with an internet connection. I think across the world there will be people who may want to see the film and I'm excited to take steps to offer that possibility.

For the next project, I look forward to do something that takes a lot of research and investigation of a world apart from the one I call my day-to-day existence and then maybe in a few years I'll make a screwball comedy with like, Katy Perry or something.

﻿That is amazing casting. (laughing) Thanks so much Jay, this was great.