Review: THE DEAL, A Serviceable But Generic Korean Revenge Thriller 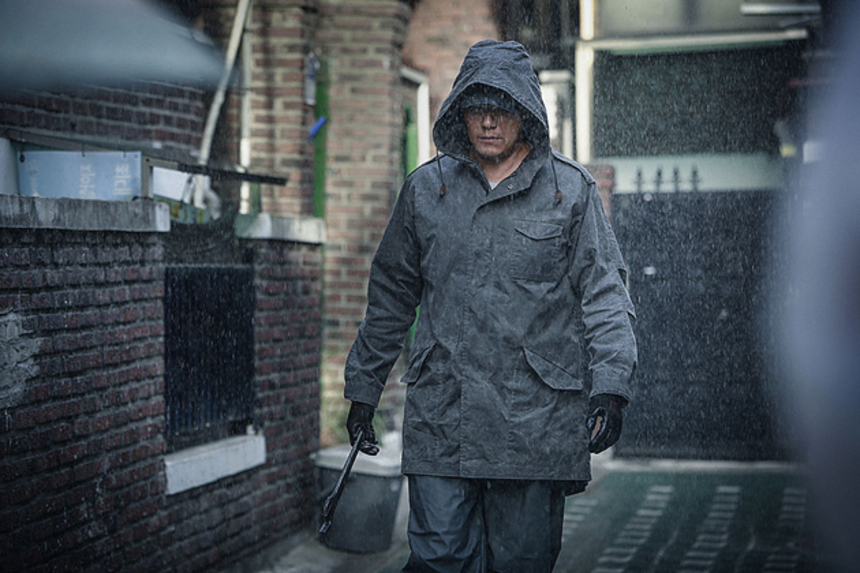 Korea delivers yet another serviceable revenge thriller with The Deal, a well-oiled but overly familiar addition to the longstanding local genre staple. With young women violently murdered during downpours and Kim Sang-kyung once again playing a hapless detective at his wit's end, the film immediately calls to mind modern classic Memories of Murder (2003), an inevitable comparison but a tough act to live up to.

Veteran cop Tae-soo takes on a small hit-and-run case but what he ends up tracking down is Gang-chun, the perpetrator of a brutal series of wanton slayings. At first basking in his victory, he soon realizes that the killer's last victim was his sister. He desperately tries to get her whereabouts out of Gang-chun but fails, bringing despair upon him and Seung-hyun, his brother-in-law. Three years later, Tae-soo investigates the murder of a gang boss and before long discovers the involvement of Seung-hyun, as well as a grudge between the victim and a former boss who now resides in the same prison as Gang-chun.

Quickly and cleanly hitting all the Korean thriller tropes in its first act, the film is initially engaging if unoriginal. Ironically, once it tries to forge its own path, it slows to a crawl before becoming increasingly outlandish as it barrels to its climax. In addition to an almost constant downpour in the film's first half, The Deal leaves no stone unturned in the Korean thriller canon, featuring obligatory foot chases, people getting knocked over by cars only to get straight back up again, and gratuitous knife wounds.

Though not lacking in style, the film does betray a lack of ideas. It condenses a standard serial killer narrative into 40 minutes, and proceeds to go in a different direction in its second half, but all it really does is rehash things we've seen before. The tone also shifts abruptly, as the plot and set pieces become exceptionally implausible to the point of being cartoonish. It's reminiscent of the knowingly overwrought revenge thriller The Fives (2003), which was based on a web-comic, but is nowhere near as tongue-in-check. Interestingly, a special web-toon based on the film will be released a day after its release in theaters.

In the lead, Kim Sang-kyung finds himself in very comfortable territory, but after Memories of Murder and more recently Montage (2013), Kim's detective here feels more like a caricature of his former characters. Almost immediately put into a desperate situation, his protagonist here is prone to excessive histrionics.

Even more caricatured, but certainly formidable as the antagonist, is the hulking Park Sang-woong (New World, 2013), who smirks his way through every scene, with the odd sinister one-liner escaping his placid exterior. There's no doubting he has the physique and physiognomy to pull off the role but as he continues to grimace, even when stabbed repeatedly, it begins to veer into comedy, which one would hope is intentional.

Rounding out the leading trio is Kim Sung-kyun, a stage actor who has become a big supporting player in the industry following his memorable appearance in Nameless Gangster (2012). Though his character has two very different sides, Kim's performance is probably the most grounded in the film, even though he isn't given strong enough material to shine.

As a debut that borrows from many well-known Korean films, it's hard to say what director Son Yong-ho brings to the project. He demonstrates a keen feel for the film's aesthetic and crafts some good scenes but with poor pacing and a unbalanced tone that seems less deliberate than unsure of itself, he seems a more visually-inclined filmmaker than a natural storyteller.

Anchored by rain-drenched exterior shots on tilted angles and close-ups with shallow depths of field shifting between characters and inanimate objects (such as car windows and windshields), The Deal boasts solid lensing from Lee Jong-Yeol, which is bolstered by a strong score from Gu Ja-won and Ahn Hyun-jin.

Despite a few eyebrow-raising moments, The Deal is a reasonably effective Korean revenge thriller that benefits from a relatively short running time (102 minutes) and a competent triumvirate of performers. However, it's the kind of film that is more likely to remind viewers of far superior Korean thrillers than leave any sort of lasting impression of its own.

Do you feel this content is inappropriate or infringes upon your rights? Click here to report it, or see our DMCA policy.
kim sang-kyungkim sung-kyunkoreakorean revenge thrillerpark sang-woongthe deal김상경김성균박성웅살인의뢰