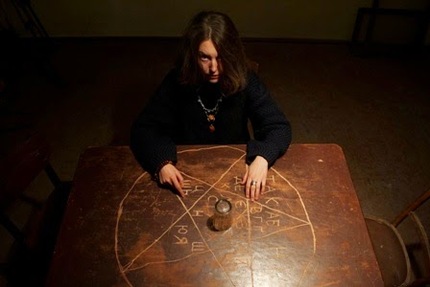 Horror films form a very niche and minor part of Czech cinema. Despite boasting a small list of interesting horror films, such as Juraj Herz famous The Cremator or his gothic tale Morgiana, contemporary endeavours failed to please audiences and critics alike.

Leaving the debate about the state of genre production in small countries aside, recently two films hit the dark rooms across the country; one armed with a heavy advertising campaign, while the other appeared seemingly out of the blue. This latter film follows a group of students investigating an abandoned -- and naturally haunted -- asylum, Saint Nicolas (the asylum and title of the film), and was done with almost no budget after a failed crowdfunding campaign, by a director lacking vocational training. Though the crew´s ambition was to shoot the first Czech found footage film, the other horror movie made it unto domestic theatrical circuit one week before Saint Nicolas, and did quite good in its opening week-end box-office.

Ghoul, the title of this promotion-wise well-prepared self-proclaimed "dark thriller", revolves around (or inside) a small, young wanna-be documentary crew of two guys and a female moderator, who are struggling to break through. In order to get their careers off the ground, creating a convincing pilot for a future docu-series seems the only course for them to take. Packing film equipment and a tight budget (father´s money), they fly off to Kiev. The plot bounces off a story about mass famine in Ukraine in 1932, which eventually led to widespread acts of cannibalism, which will be the central theme of the pilot in development. And the film´s tagline "Hunger takes many forms" foreshadows the direction where its plot will soon be heading.

After meeting the money-hungry guide of the expedition, Valerij, and an interpreter Katarina (a necessity when roaming these foreign lands), the gang is ready to head to a typical Ukraine village, Yablochnoye, to shoot interviews with locals who survived the famine, or who at least heard some creepy tales of people feeding on human flesh. The first part of the film fulfills the usual tropes. We get an opening inter-title implying the real events behind the film (albeit not proclaiming it openly), we get archive footage of meager-looking Ukrainians suffering under Stalin´s merciless iron fist, we get the culture shock routine, and finally we get to meet the man of the hour: Boris, a man sentenced for a gruesome murder followed by the act of cannibalism. After Boris is set up for the interview, for which he promises to reveal haunting details of the crime he committed, he gives the crew a key from a hut where the nefarious act took place.

As the locals won´t talk to strangers, the gang leaves the small village, and civilization with it. Just before they leave Valerij brings over a psychic, though the word he uses for her is "witch". By this time everything is in order, every ingredient in the pot is ready to boil, so the voyage to Boris´ house is next on Ghoul´s itinerary. The house ends up being a derelict manor standing tall in a god forsaken corner of the Ukrainian woods. The crew´s inventory counts two main cameras and several backup cameras mounted in rooms to capture whatever odd details should appear. Boris is supposed to make the experience as vivid as possible, yet the man runs late, and weird phenomena usurp the stage.

Czech director Petr Jákl, once a stuntman in American movies, debuted with the thriller Kajínek, a drama about most famous Czech prison break and its main participant Jiří Kajínek (played by Konstantin Lavronenko), who is also considered to be the first Czech contract killer. Jákl established himself as a filmmaker of the craft, apt to deliver a product of competitive quality on an international level. His sophomore feature Ghoul affirms this reputation. The English-speaking cast and polished visuals make the film indistinguishable from international productions, one of the reasons why it secured a release on U.S. territory.

Trailers for upcoming (imported) horror films preceded my screening, and they all relied heavily on suffocating atmosphere-building. Ghoul kicks off similarly, slowly piling one note after another in a supposed cacophony of trepidation. But instead of crescendoing, it arrives at a turning point: a pentagram scribbled on the table in Boris´ house, and an unlucky drunken seance.

Jákl tries to fit atmospheric horror into a "cabin in the woods" scenario supported by tropes from slashers and demon possession films. More discerning viewers will soon recall the year 1997, and the creepfest of The Blair Witch Project, and they won´t get themselves so easily sidetracked by the presence of the infamous Rostov butcher, Andrei Romanovich Chikatilo (study material about him can be found in the films Citizen-X or Evilenko). Not a homage, yet not entirely a clone either, the Czech director draws his inspiration from the pioneers of the found footage genre, a somewhat anachronistic gesture after eighteen years and dozens of entries of this kind.

After the first act, Ghoul turns into haunted house attraction, producing many jumps scares stemming from running around in the woods with a camera and flashlight. Simple yet effective, the scares come in with similar intensity, and provide the more immersive experience you often see in games. The director mixes certified horror formulas and does everything by the book, but the film lacks any invention, and the final all-too-revealing sequence, while wanting to serve up a proper cliffhanger, winds up delivering a self-parodying shtick.

An incremental step for the genre, but a big jump for Petr Jákl, Ghoulproves that a domestic production can be carried out and achieve international standards, and can even be vital enough to beat the competition. In its niche, Ghoul fares better than Chernobyl Diaries, and domestic admissions happened to also surpass Paranormal Activity: The Marked Ones, Insidious: Chapter 2 and Maniac.

Ghoul is now in general theatrical release in Slovakia and Czech Republic and will have limited run in U.S. territory opening March 20