Berlinale 2015 Review: NOBODY WANTS THE NIGHT: A Beautiful But Flawed Epic 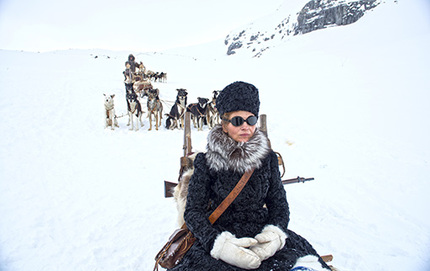 Spanish auteur Isabel Coixet (Elegy, My Life Without Me) opened Berlinale with her latest and most ambitious film to date, Nobody Wants the Night. Based on real life persons (though it was unclear whether the events actually occurred), it is a visually stunning film, a raw and anguishing story of love, betrayal and cultural conflict. And yet, it is perhaps this ambition that brings out some serious narrative problems that, while I didn't actively dislike them, made the film a bit less than the sum of its parts.

Juliette Binoche (looking more than a little like an aged Julie Christie in Dr. Zhivago) plays Josephine Peary, wife of the Arctic Explorer Robert Peary. An arctic adventurer herself, she has come to Ellesmere Island in 1908 to be near her husband on what is expected to be his last expedition to discover the North Pole. Advised by many, including her Irish-gone-Native guide Bram Trevor (Gabriel Byrne) to wait at the nearest village, she insists on going to a remote basecamp to await her husband. There, she meets Alaka (Rinko Kukuchi), an Inuit girl who seems unusually devoted to Josephine.

Having gone dog-sledding in winter along the Yukon River (just me, a guide and the dogs), I am well acquainted with both the beauty and the terror of the isolated north and the extreme cold. Given its setting in the early 20th century, Coixet and screenwriter Miguel Barros (who also wrote Blackthorn) make clear the ignorance and cultural insensitivity (to put it mildly) of the white people who love the landscape but disdain the people, who seek to conquer without understanding the very obvious dangers. Driven by an obsessive love of her husband (which, it would seem, given his absence for all but two years of their marriage, is undeserving), Josephine ignores the obvious perils, even at the loss of life. Much of the film is devoted to her slow descent into madness and degradation brought on by the extreme physical circumstances, and that descent follows a steady and interesting line.

This is the kind of role that Binoche can easily sink her teeth into; she is, as always, focused and intense, familiar enough with the camera to let the smallest gestures speak volumes. Binoche's honed acting training is matched very well by Kikuchi's more naturalistic performance. Certainly, this 'two people from difference worlds who survive together against the odds' scenario is not necessarily new, but it is rare that it be two women. In this kind of climate, being male is no advantage, and while the story often focuses on love and jealousy, it is still about survival against the elements. If near the end it felt a bit drawn out, I think that was on purpose and probably to the film's benefit: it can indeed take a long time to die of starvation, and the stages of anger, grief, and acceptance can last days before the final maddening peace comes. By switching between shots of the unbearable landscape, and the tiny room that the two women share and how they perceive each other, Coixet emphasizes both Josephine's alienness in the north, and Alaka's alienness in Josephine's attempted maintenance of her culture. Much of the credit here goes to editor Elena Ruiz and cinematographer Jean-Claude Larrieu, whose combined efforts convey the dichotomy of character and landscape.

Unfortunately, a series of problems, mostly with the story but also how Coixet chooses to tell it, interrupt the flow. A voice-over is used to explain some of the historical information (which is fine), but also at times to describe Josephine's emotions. I'm surprised that a seasoned director such as Coixet would choose this route; this is film, not literature, and you should use the camera, sound and actor to convey emotion. The final voice over especially seemed to force the audience to feel things, as opposed to letting Binoche show us what we needed to know. In addition, the dialogue is a bit too stiff and formal, making me wonder if Barros wrote in his non-native language (it's always a good idea, if a screenwriter goes this route, to have a native speaker check it, as there are too many nuances that a non-native speaker will never pick up on).

Given that this is a historical drama, I can understand why the decision was made to be realistic in the attitudes of the white people towards the Inuit (referred to as Eskimos in the film). And the Inuit characters will be speaking an incomplete English. But Alaka's dialogue, even given the language, made her sound too childish, and did not allow her character the full expression she deserved. Even given the film's setting, at this point, we need to be giving Native characters far more depth of expression.

There is a lot to admire in Nobody Wants the Night, as there always is in Coixet's work, but I can't help but feel that she should have spent a little more time revising the script to make it as three-dimensional as the world her characters were supposed to inhabit. Certainly, it is stunning enough that I felt the need to keep my coat around my shoulders. But having read a little bit on the real Josephine Peary, who was an early feminist who worked at the Smithsonian, I can't feel but Coixet has given her a bit of short shrift by making this film about her obsession with her husband as opposed to her own accomplishments. More time in developing the story, and more respect for the characters, would have helped the film, which ended up leaving me a bit emotionally cold.

Do you feel this content is inappropriate or infringes upon your rights? Click here to report it, or see our DMCA policy.
BerlinaleGabriel ByrneIsabel CoixetJuliette BinocheRinko Kikuchi

More about Nobody Wants the Night