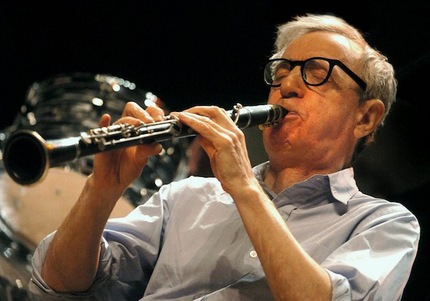 Woody Allen is heading back to TV. Or, er, well kinda. A near lifetime after getting his start as a writer on The Tonight Show and Candid Camera, the Annie Hall director is set to write and direct an entire season of an untitled project for Amazon Studios. The show is set to stream exclusively through their Amazon Prime membership sometime in 2016. There are no further details on cast and story at this time.

This news comes on the heels of Amazon's first awards with Golden Globes wins for Jill Solloway's exceptional Transparent, about a transgender woman played by Jeffery Tambor (who also won) and his adult children.

With the clunky if good-spirited Mozart In The Jungle from Jason Schwartzman, Roman Coppola and Paul Weitz streaming now, the Whit Stillman series The Cosmopolitans still in contention, and now Allen coming on board, Amazon is quickly and efficiently creating an interesting body of work to rival other streaming services. While Transparent is indeed groundbreaking, here's hoping for some cultural and class diversity in their next series, because with Allen, Stillman and a show about (mostly) privileged classical musicians in New York, Amazon really seems to be cornering a certain market.