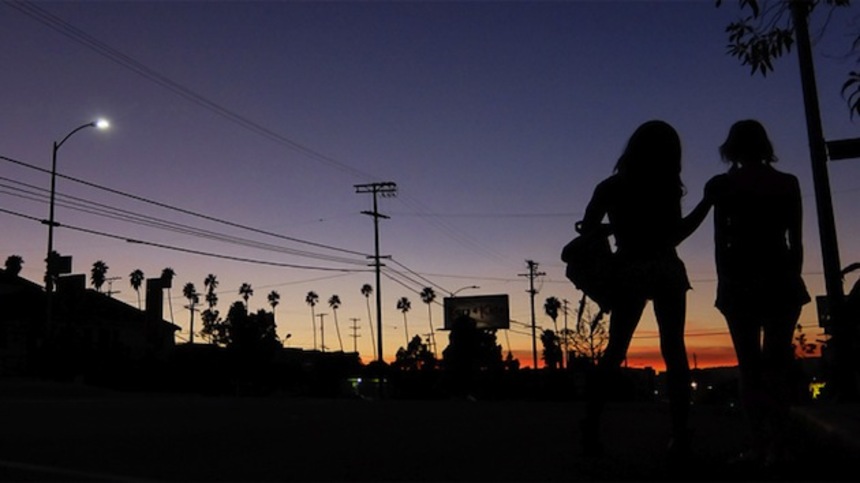 On the streets of Los Angeles sunlight seems to move differently than in most places. It blazes, arching across the sky, like a banshee spreading its wings. From behind the wheel of your car, inching forward in the hellion-marked traffic of the110 freeway or Wilshire Boulevard, that sunlight, so bright and blinding begins to play tricks through your windshield. Ornaments of light tick across your eyes. Time slows down and one must wait.

But on the sidewalks of the city, there is no waiting. The sun bursts forth, commanding you onward with a tenacity that culminates in a feverish deluge of delight and despair; of life unhinged from the automobile, not observed from behind glass, but felt up close. It is something fierce enough to grab you by the hand and never let go.

This is the life blood and DNA that propels Sean Baker's third feature film Tangerine, which had its world premiere last evening in the NEXT <=> selection of Sundance.

Popping with a verve that doesn't cease to marvel and charm across its 88 minutes, Tangerine breathlessly follows Sin-dee (Kitana Kiki Rodriguez) and her best friend Alexandra (Mya Taylor) across Tinseltown (the long mid-city stretch of Santa Monica Boulevard mostly). Sin-dee hears of a vicious rumor that has her boyfriand and pimp Chester cheating on her during her 28 days in lockup with a "real fish", IE a woman born as such, and not someone who has transitioned later in life, like both Sin-dee and Alexandra have.

Propelled by that fever of the concrete for some kind of revenge against Chester, or just the whole truth, Sin-dee's mission is a dizzying escapade that sends us hurtling into shabby strip malls and the secret party rooms of motels, a working-class Los Angeles that most movies shot in the city often ignore outright or else merely lens through violence. Working in true cinema-vérité fashion Baker and his DP Radium Cheung bring the reality of the city, as focused and true as possible, by shooting their picture on the iPhone 5S with an anamorphic lens adapter. The immediacy brought by the pocket technology brings the work into a startling clarity that could not have been achievable in any other way. For this, there are no barriers between the audience and the denizens of Tinsletown.

And as any such barriers fall away between the "us" and the "them", so too do any notions of the city and its people remain separate. Often shot as a hollow no-where, no-name city, pockmarked by some glorified skyline of downtown, its true geography hidden away, Los Angeles, the ever-forming fractal heteropolis is presented here as the lively organism it is. There is no barrier between its people and its places, no delusion of other, of it, of nothing. In this sense, everything throbs and glows with sulfuric purpose, the film's often askew nature making it all the more human. 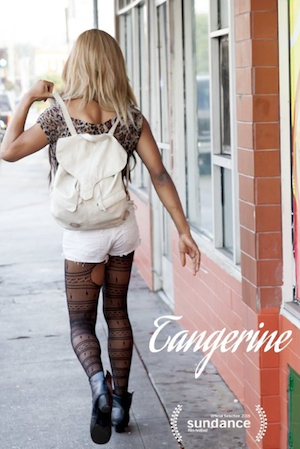 This all comes to such light by the work of Rodriguez and Taylor who own their respected roles of Sin-dee and Alexandra with sparkling wit and desire. The friends balance the other's moods and motives with a deeply affecting tenderness and steadfastness that sticks through the low times and high times alike. Sin-dee is the determined one, outspoken and physical. Alexandra is the more reserved artist, though when push comes to shove isn't afraid to fight for what is hers. The supporting cast is just as strong. From James Ransone's smooth-talking Chester, to Mickey O'Hagan as Dinah, the prostitute caught in the middle of this tumult, and Karren Karaguilian as Razmik, the Armenian family man and cab driver whose connection to the girls gradually unfolds in a parallel storyline.

The two-step, thrice-kicked structure of Baker and co-writer Bergoch's interlocking stories allows for this naturalism to shimmer through moments that cannot be filtered by judgment or shame, often trademarks of movies that chronicle the working-class in America. Devoid of the sensationalism that begets poverty-porn, or the melodrama that betrays most human complexities, Tangerine allows for its characters' faults, short comings and problems to just be. There is no condemning by the filmmaker's hand. This results in some of the most exceptional moments one may find in American cinema this year. A blowjob in the front seat of car as it glides through a car wash becomes a dream scape of fraternity and desire, escapism grounded in truth, being at once revealed and hidden by the humming, swishing brushes and sparklets of water dancing across the windshield. The cut from a toddler to two women in a bathroom lighting up a crack pipe is not meant to juxtapose or distance the lives on screen, but to unify them through a spiritual beauty reminiscent of the works of Robert Bresson and Krzysztof Kieślowski.

The film's pulse may be achingly human, but its beats are made up of subsonic, post-post-modern trap music, with its double-time, triple-time and even faster time divisions accelerating that beat of the sidewalk to near mythic proportions without ever dulling or nullifying the heart of this story. Indeed the music, which Baker and co. cultivated largely from independent Soundcloud artists, signifies that life blood of the city and its characters, fully intertwining them.

What startles in Tangerine, also delights. What hits hard, is followed by a hand on the shoulder, and a friend reminding you just who you really are. The film exemplifies America's true cultural and ethnic heritage as a melting pot, which may bring along strife and fear, but also a sense of community and family that is unwavering. For America's truest dream-city Los Angeles -- the one to lure us out west with promise -- is the beast which by its own fractal paradoxes brings us all together. And there we shine under that SoCal sun. Truth becoming truth. Love being love, in which ever form it arrives in.