Review: FOXCATCHER, A Rewarding Look Into A Cold And Strange World 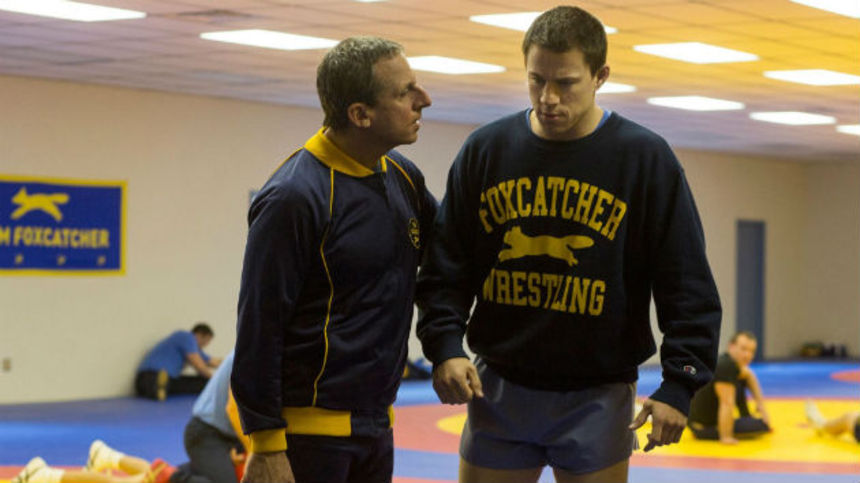 John Eleuthère du Pont, one of the heirs to the vast Du Pont fortune, had it all, it seemed. Wealthy almost beyond measure, he studied and wrote on ornithology and was an avid philatelist, having paid a record (at the time) for one of the rarest stamps in the world.

He also had a fascination with Olympic wrestling, and became inexorably linked to the training and support of several world class athletes.

And then things went very wrong.

Foxcatcher, the latest film by Bennett Miller, director of Moneyball and Capote, delves into the lives of Du Pont and the brother Olympians Mark and Dave Schultz. Even more so than with Moneyball, this is not a sports movie, but it is about sport and competition, showing through several masterful performances and a carefully constructed script the toil of training, as well as the emotional sacrifices and manipulations required to achieve at this high level.

Similar to Capote, this is a biographical film without many of the trappings of a conventional biopic. Since the circumstances the film centers upon are so surreal, and the causes open to interpretation, Miller and his writers instead create a narrative space where these behaviors seem coherent within context, even if they are driven by inexplicable madness.

Du Pont had mommy issues, the film makes clear, and, as presented, he treated his stable of athletes just as his equestrian mother treated her collection of prized stallions. The film reeks of privilege, Du Pont literally being able to buy what he wants even if it's not for sale. This twisted imbalance of power beyond any reasonable notion of fairness, an almost medieval level of coercion and power, gives the film its weight.

Much of the film is told through very subtle behaviours: glances or conversations seen but not heard. The overt conflict in the ring is mirrored by a far more subtle dance between Du Pont and the Schultz brothers, but in each case it seems to be a matter of causing harm by a thousand cuts, easy small compromises resulting in an inexorable descent into tragedy.

Miller's casting is once again exemplary. Steve Carell transforms himself into the aloof Du Pont. Yes, Oscar likes actors in fake noses, and this is the kind of role that may get him dramatic notice. Channing Tatum's presence on screen is exemplary, his raw physicality and almost animalistic movements while training are a perfect visual echo for how Du Pont regards his athletes.

Yet it is Mark Ruffalo who perhaps deserves the most praise. His subtle and convincing performance as Tatum's older brother, including an introductory sparring bout with Tatum that's one of the film's most indelible moments, proves again that he is a performer of many gifts.

Despite the near-operatic drama of the film's narrative, the entire film is presented with an almost somber restraint. Through a remarkable soundscape -- from the use of music through to the jarring slaps from combat in the wrestling arena -- we're drawn into a cold and strange world that orbits Du Pont's vast wealth.

Some may not have the patience to stick with the film while it almost floats along, but for those willing to enjoy the remarkable performances and restrained direction, there is plenty to reward a committed audience.

Review originally published in slightly different form during the Cannes Film Festival in May 2014. The film opens in select theaters in the U.S. on Friday, November 14, via Sony Pictures Classics.