Cairo 2014 Review: THEEB Doesn't Quite Live Up to its Promise 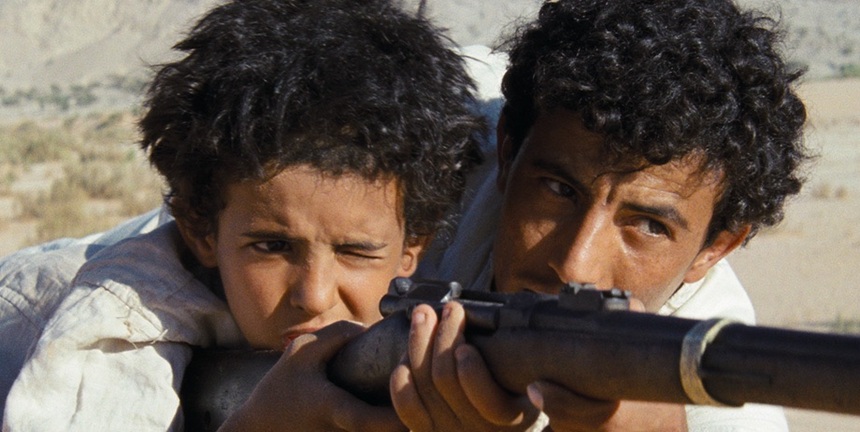 Stories of war or violent conflict can often seem more acute and terrifying through the eyes of a child, especially if it is only from the periphery, when the child knows less than the audience.

Theeb, Jordanian director Naji Abu's first feature-length film, presents the story of a boy on the periphery of World War I, completely ignorant of the event yet affected by it in the most heartbreaking way. And yet, while an event so big can remain on the periphery in a story such as this, and the film begins with this side look through the eyes of the Bedouin child very strongly, once that event is (more or less) narratively abandoned, the film falters.

Theeb lives with his brother Hussein and their tribe in the Hejax province of the then Ottoman empire. One evening, a British officer arrives, asking for a guide for he and his Bedouin colleague along an old pilgrimage route to Mecca, one that is now dotted with thieves and brigands. When Hussein is sent with them, Theeb follows. The British officer has an important mission to complete, one that will see Theeb witness acts no child should see.

The film was shot on location in Wadi Ram and Wadi Araba, with non-professional actors from one of the last Bedouin tribes to settle. This is to the film's great advantage. Nowar and his actors present the desert as beautiful, but obviously cruel. This is not the romanticized British notion of the desert; it is one that is lived in, loved, and feared as it should be.

The film excels in its first half: seen through the eyes of Theeb, as the journey begins, he is a typical stubborn and headstrong child, happiest when with his brother so he will not be left behind, but unaware of dangers beyond the desert that he cannot comprehend. Theeb cannot understand why the British officer is so kind to him at one point, and then the next, rages at him for playing with a mysterious box.

Once a conversation between the officer and the Bedouins hints at the true purpose of their journey (a mission to help the Arab revolt against the Turks), the audience can guess what is happening, and know the stakes are far higher than Theeb realizes. This certainly brings out great sympathy for Theeb, especially as his continues to brush off the warnings of his brother.

Up until the midway point, the film finds its way through the sand and sun, and through a fantastic sound mix that gives the echoes of words and gunfire tremendous weight, emphasizing not only the emptiness of the landscape, but bringing to full force how frightening a few sounds can be. But after a dramatic scene that will leave Theeb (for a short time) alone, the film reverts into a more meditative state that takes it off its promised course.

Of course, films often will make an unexpected change of direction or intent, but in this case, it felt as if the wind was taken out of the film's proverbial sails. The tension of the situation, caught between a contemplative state of a disappearing desert existence and the oncoming changes brought on by war. Theeb doesn't grow and change as much as would be expected given the circumstances, instead staying somewhat ignorant and at times, frustratingly so. Arguably, the film is attempting something of a neo-western tone, but with a lack of immediate danger and conflict in the second half, that tone doesn't quite work.

Given the circumstances under which the film was made, on a small budget, working in a remote and difficult geography, Theeb has much to recommend it, with understated and strong performances, an instinctive sense of landscape, and at least at first, an intriguing story. I just wish the narrative had allowed greater character development, and the story had stayed on course.