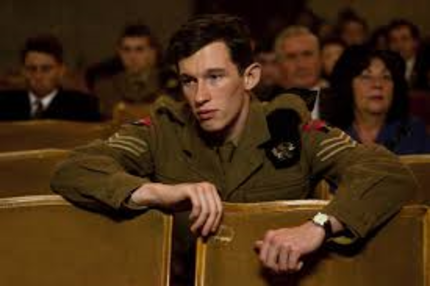 John Boorman's 1987 film Hope and Glory, about the London Blitz seen through the eyes of a nine-year-old boy, is a favourite in the Rowan-Legg household (seriously, we can all quote it almost verbatim to the point of annoying guests). Partly based on Boorman's own experiences, it was the perfect mixture of humour, family drama and the realities of the difficult homefront life during World War II. So it was with a mixture of great anticipation and trepidation that I sat down to watch his follow up, Queen and Country. I shouldn't have worried; Boorman's keen eye for detail, his strong political convictions, and his lack of fear in being both romantic and politically satirical have not dimished.

Set 10 years after the first film, our hero, Billy Rohan (Callum Turner), now 19 and still living on the river (noted now as being near Shepperton film studios), has been conscripted into the army. The British are participating in the Korean War, so the danger looms of Billy being sent to the front. He and fellow conscript Percy (Caleb Landry Jones) butt heads with their various superiors, such as the by-the-book non-com officer and PTSD sufferer Bradley (David Thelis) and insipid commander Cross (Richard E. Grant); meet pretty nurses and other ladies, one of whom steals Billy's heart; and Billy espouses left-leaning political ideals that go against the establishment. His sister Dawn returns for a visit from Canada (where she went to live with her husband after getting pregnant at 17 in the first film), and Billy growns into manhood.

It could be argued that both the narrative and construction of the film offers little in the way of surprise; but in this case, and in the hands of a master such as Boorman, this is not a bad thing. The film is injected with a very British dry and ironic humour, as the young lads adjust to army life; while neither likes it, Billy accepts it, but Percy finds it a struggle to the point of getting into serious trouble with his superiors. As stated, the officers represented are cut from cloth, but again, given the director and actors, they are infused with greater depth. Thewlis stands out, not only with his character's eidedic memory for army regulations, but in slowly revealing the effects of PTSD with such effectiveness realness that sympathy is inevitable.

Turner plays Billy exactly as you would have expected him to grow up: intelligent, aware of his surroundings, well-read, and influenced enough by what he saw during the Blitz so as to be, if not necessarily a conscientious objector, then at least someone who knows well enough that this particular war is about conflicting political ideologies (neither of which he supports) as oppose to fighting world domination. Like its predecessor, the events are viewed through Billy's eyes, so that the tone moves from humourous to serious to an eventual relatively happy ending. We get to see Billy strike out on his own, experience his first love and first heartache, his first adult confrontation with the consequences of his bad actions, and the development of his intellect. Billy's imagination has not dimished though, and the film gives nod to his imagining in a few scenes, a fantasy of grandeur and imagination that one has no trouble imagining Billy, as a substitute for Boorman, in his future role as storyteller.

Again, like Hope and Glory, Queen and Country works best when it reflects on the effect world events have a simple family life. When Billy has a weekend at home with his parents (David Hayman returns as his Dad, the only original cast member to reprise his role) and brings Percy along so they can all watch the coronation of Queen Elizabeth II, you can sense how the family has adjusted since the Blitz, not always for the better (especially considering the unexplained absence of younger sister Suzy from the story). But like good British folk, they keep calm and carry on.

I wouldn't say that it is necessary to have seen Hope and Glory to watch Queen and Country, though there are a few loving nods, such as Billy's eventually army assignment, and Percy's short-term destination at the end of the film (I'll leave those discoveries for those who have seen the first film). And while it might not be quite as strong or original as the first, Queen and Country showcases much of the best of Boorman's work: war, political awareness, love, and family.

Do you feel this content is inappropriate or infringes upon your rights? Click here to report it, or see our DMCA policy.
Cairo 2014John BoormanQueen and Country

More about Queen and Country