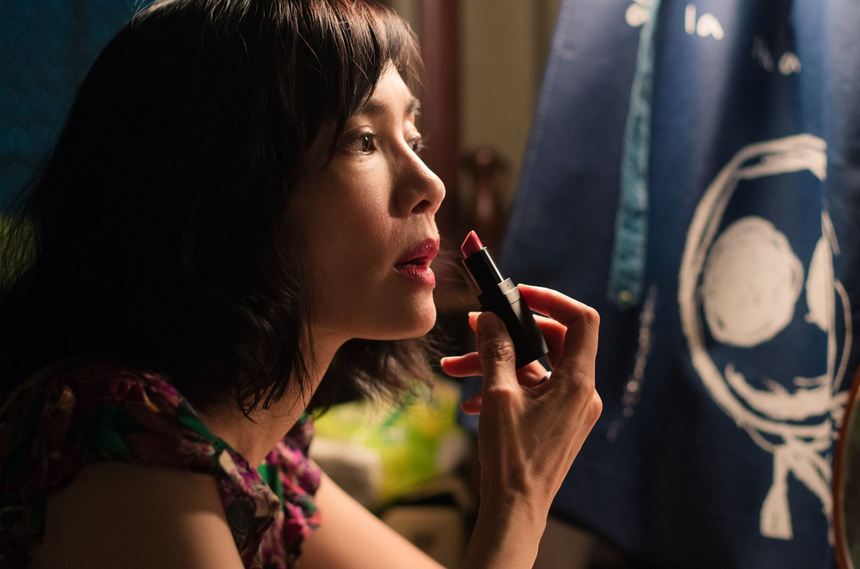 Chienn Hsiang's second feature, Exit, is lovely to look at, and pleasant enough to watch, but ultimately feels inconsequential. Chen Shiang-chyi stars as Lingzi, a childlike middle-aged woman finds herself alone for a few weeks while her teenaged daughter visits her father--Lingzi's estranged ex-husband. Her thankless job as a seamstress is mostly solo work, and her hospitalized mother is too frail and ill to be much of a conversationalist, so Lingzi increasingly winds up daydreaming, and wandering through life in a bemused haze.

In what is seemingly the core development of the film (though it, like other plot stands in the movie, never really goes anywhere), Lingzi fosters a strange bond with a man who is suffering in the same hospital room as her mother. He grunts in pain, his body (and eyes) covered in bandages, until Lingzi clumsily spills water on him while trying to pacify him with a sip. When she rubs him with a cloth, he stops his tormented moaning--so she makes a regular thing of it. There is some eroticism in the way their scenes are shot, but it is always tempered by the woman's doe-eyed naiveté; her touches are curious and probing, the cloth she chooses tellingly adorned with a cute rabbit.

Thanks to her encounters with this bedridden stranger, Lingzi gains new confidence and applies it to her looks. She gets dolled up--and we can tell she hasn't recently, as a sniff-test reveals many of her cosmetics have expired--with makeup, dancing shoes, and a new, self-sewn dress. Though Chen is good in her role, these are tired tropes: middle-aged women getting their grooves back, or not, as the case may be. There isn't anything new, or particularly affecting about Lingzi's story, nor the way it's delivered to us.

To his credit, Chienn has a talent for composition and production design. Lingzi's apartment feels as cramped and hot as it looks, with its crowded shelves and peeling wallpaper. There are many wonderfully framed scenes that are just begging to be screenshots, and his style is very assured for a filmmaker on only his sophomore effort. Apart from visuals alone, Exit is at its best when it allows some humor to shine through--like when Lingzi yanks the hospital curtain over her face to prevent her spongebath buddy from seeing her, or when she absent-mindedly chugs down some very spoiled milk. But these moments are few and far between, and Chienn seems more content to make yet another contemplative, sad portrait of a lonely urban woman past her prime.

Again, there is nothing offensively bad about the film. In fact, many of my complaints are difficult to articulate at all. The most troubling thing about Exit is that it just doesn't accomplish, or say anything that other movies haven't already, and more effectively. I was left feeling very ambivalent, and unsatisfied. Sort of like when you order a delicious-looking meal, but it's not as good as its presentation would suggest, and you're hungry again an hour later. Hopefully Chienn's next film makes better usage of his visual gifts, and develops its themes into something more palatable.