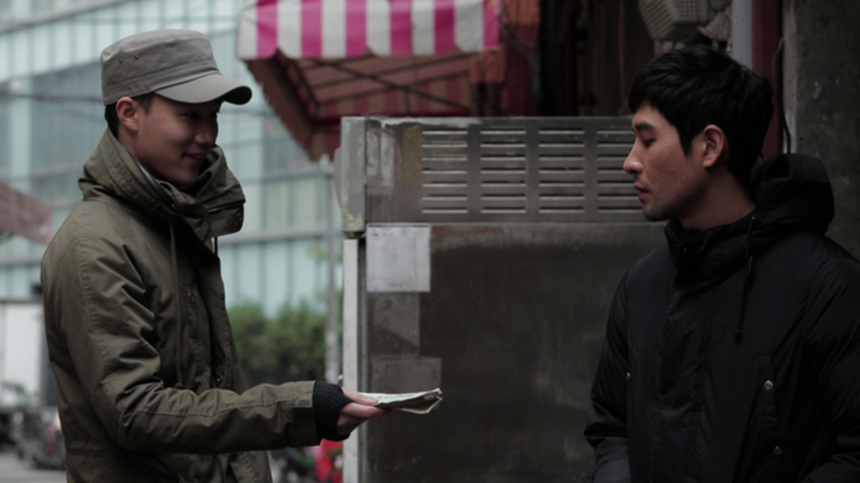 Taking its cue from the common social grievances often found in Korean indie dramas, Gifted, the sophomore effort of Poongsan (2011) helmer Jung Jai-hung, examines the friction between unemployment and consumerist ambitions in modern Korea. Slight and familiar, the film doesn't immediately stand out but when its narrative starts to deviate off the standard template, it isn't long before it goes in a surprising direction.

Min-soo has been unemployed for months. Laid off from his company after eight years of service with no promotion, his job history is haunting his current work applications, as recruiters are quick to dismiss him. His girlfriend Su-jin is offered the opportunity to buy out her employer's cafe, but she isn't aware of Min-soo's job status and when she signs a deed for the small business her boyfriend must come clean, prompting a swift breakup. Su-jin's brother is a wastrel who steals phones from saunas to sell them off but when those meagre returns fail to satisfy him, he sets his sights on boosting cars. It isn't long before he enlists the help of Min-soo, a former care insurance salesman who knows how to get into a car and where the city's CCTV cameras are located, and together they enter into a life of crime.

By taking some time to embed us into Min-soo's predicament, Gifted aligns us towards his needs and frustrations, so when he secures an illegal means of income, it comes as little surprise. However, just as we think we know how the story will unfold, Jung plays his trump card, dragging Min-soo and the audience into completely unexpected territory. At this point, Min-soo's anger towards society becomes a catalyst for extreme violence. Far from being a MacGuffin to throw us off our guard, the long setup sets the stage for an allegorical descent into depravity.

However, the problem with the setup is that it drags before things really get started. Furthermore, coming from a director with some experience, the staging feels quite stilted, with much of the action feeling unnatural. At times, characters talk mechanically and their conversations feel forced. Jung was formally an assistant director for Kim Ki-duk and the auteur was also the producer and writer of his first feature, so it's possible that his style of emblematic characterisation rubbed off on him, a style that doesn't suit this kind of film.

Where the film also stumbles is in its characterisations, not to mention its casting. Min-soo is an emasculated male of the variety that is commonly found in Korea and only really comes alive after the twist. Yet after the novelty of this change wears off, the character ceases to develop. Failing to make the role his own, actor Kim Beom-jun gives a performance too similar to those found in other Korean indie dramas.

Far more problematic is the character of Su-jin, a beautiful woman who quickly shows off her fierce materialism, notable in a scene where she berates her unemployed boyfriend for having never bought her a designer bag, the ultimate status symbol for young women in Seoul. Though attractive, she possesses no characteristics beyond her shallowness and is hard to take seriously as a woman that Min-soo would desperately want to get back. As the thinly drawn Su-jin, Bae Jeong-hwa is ill-afforded an opportunity to shine. Faring the best in the main cast is Jeon Beom-su as Su-jin's brother. His dalliance with petty theft is the most interesting part of the film in its early stages. However, once his presence is revealed to be little more than an excuse to introduce Min-soo into the world of crime, the character is all but forgotten about.

Perhaps the most interesting element in Gifted's mixed bag of social grievance and genre tics is the psycho-sexual element introduced along with Min-soo's violence. He is constantly berated and destitute but nevertheless perseveres, however, when a young punk he drives home gives him a tip to wash off the stink of raw chicken from his day job, he finally decides to make a more drastic change. It's the insult that sticks in his craw and, later, when a former boss tramples on his ego, all hell breaks loose. During his cool-downs, he relives his crimes and pleasures himself, making for a literal interpretation of the reconstitution of the male id (perhaps director Kim did rub off on him). It's a shame that the pyschosexual aspect is quickly forgotten about, making the way for an intense paranoia, that is externalised in the form of encroaching CCTV cameras, which multiply during his crime spree.

In its best moments, trilling piano melodies, bright, fresh snow and a dark narrative gel to impressive effect in Gifted. But an uneven plot and poor characters drag it down, throttling its potential. A twisted tale of self-discovery, infused with an at times curious and morbid beauty, Jung's latest has intent but lacks the framework to deliver.