Review: CAM2CAM Brings Hatchets And Hotties To Bangkok, But Little Else

(Or should that be Cleavers and Cleavages? Or Axes and Asses? I can never choose...)

In Joel Saisson's thriller Cam2Cam, a sicko bastard in Bangkok is decapitating young foreign women, after first making them undress in front of their own laptops with the webcam on.

Allie, a young American woman, moves into the apartment of one of the murdered girls. Soon, she seems to be following into the victim's exact same footsteps, on purpose, even visiting the same "Cam2Cam" website.

New bait, soon to be stalked by the same killer? Or is something else happening? 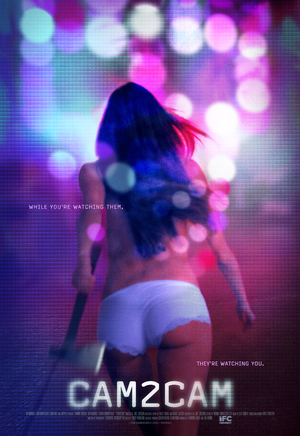 Life as we know it has changed a lot in the past two decades, with mobile telephony and social networks giving us all near-unlimited access to each other, sometimes even when we are total strangers. These changes have given new meanings to words as "security" and "privacy".

Therefore, there is much to be said for doing a modern-day version of the seventies' infamous 'giallo' thrillers. With their focus on sexual deviancy, voyeurism and fascination with rape-violence, the current chat-rooms, on-line video-streams and giallo seem tailor-made for each other, a match made in heaven.

Throw in a few twenty-something expats on sabbatical, hungry for adventure and a bit of hedonism... Sexy strangers in a strange (Thai)land, being betrayed and made victims through their own technology: on paper Cam2Cam seems like a sure win.

Regretfully, Cam2Cam never fully makes use of all this potential. The opening of the film is pretty standard slasher stuff, and it mirrors the one we saw in Scream, only using a chatbox instead of a phone. Imagine that sequence taking the entire first quarter of the film, with the Drew Barrymore character forced to go naked before being "offed", and you get pretty close to the first 20 minutes of Cam2Cam. It's only after this surprisingly mean-spirited sequence that we get to see any of the main characters, or indeed Bangkok itself.

Speaking of which, Bangkok is a beautiful city, and some shots sure do it justice. But during the film it serves just the purpose of being a default foreign place. The city and its locals might as well have been computer-generated, for all the sense of atmosphere I felt. Cam2Cam banks a bit on having an exotic location, but never really does anything with it.

Nor do any of the characters, actually. All actors don't have to do much other than look scared or angry when the script calls for it. Tammin Sursock plays Allie, and she manages to survive some excruciatingly bad dialogue. But we never find out why she should earn our support or sympathy, which hurts the film, especially during the bizarre choices her character sometimes makes. Sarah Bonrepeaux plays her neighbor who spouts even worse dialogue, coupled with an exaggerated accent (I hope) to make it even messier. But she has an undeniable charisma in front of the camera and, it has to be said, is absolutely smoking hot in this film. For that matter, so is Jade Tailor as the previous tenant.

Which brings another problem: the film's attitude towards technology and sleaze. With a gloved hatched-wielding killer running around trying to get all girls naked, you might assume the makers have a few things to say about unsafe behavior and the internet. But apparently... not.

The nudity and gore are done in a coy way, as in "we hate to put it in but we have to, or the killer makes no sense". Gasp, some breasts! Gasp, a hatchet! Gasp, a headless corpse, or even a corpse-less head! This is all done in a lightweight, sheltered fashion, and it gives the impression Cam2Cam was made specially with people in mind who have never seen a slasher before. 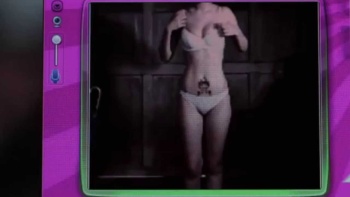 Worse, for a film named Cam2Cam it is also pretty light on technology. The whole webcam thing is just a shallow subplot, and the "they're watching you while you're watching them" aspect might as well have been using curtain-less windows instead of laptops. It's like the film tries to describe the Internet briefly to old people who have never seen it before, a strange place where bad youngsters type sentences like "yu luk prrrty, lolz".

It is telling that Satoshi Kon's Perfect Blue, a seventeen-year-old film, has more topical things to say about sleaze, the internet, chatting, peer-pressure, displacement, identity, and cyber-stalking, than Cam2Cam ever does.

Think about that for a second.

On a more positive note, Cam2Cam does look accomplished on the technical side. Cinematography is nice, the gore is well-done and the girls are very beautiful. Two bait-and-switch moments surprised me, and made me wonder where the film would take me next.

But in the end, the crummy dialogue, the naive approach to technology, and the squandering of its many opportunities become too obvious to be overlooked...

The film opens in select cinemas -- and is available via various Video On Demand (VOD) platforms -- on Friday, August 22.
Sign-In to Vote
Tweet 0 Submit