London Indian 2014 Review: AS SEEN BY THE REST Presents An Intricate Puzzle Box For Movie Buffs 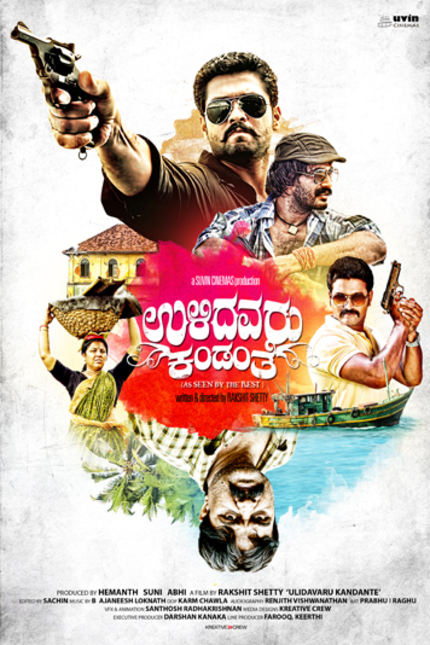 A thrilling mystery in several parts, As Seen By the Rest (Ulidavaru Kandante) is a bold leap forward for the cinema of Karnataka, India. The film is both completely comfortable in its own skin and with its identity as popular Indian cinema, and well aware of its influences, which it wears proudly on its sleeves. Writer/director/star Rakshit Shetty has delivered a bold and and confident sophomore feature after his well received Simple Agi Ondh Love Story from 2013, and his is a voice that deserves close attention.You may never have heard of the Kannada language, but their cinematic language is growing beyond their borders quickly.

Sheetal Shetty plays Regina, a young and ambitious reporter pitching a series of articles to her editor that revolve around a mysterious event that neither the audience nor the participants seem to know about. Her idea, and our guide through the film, is to confront the different parties involved in the event to try and piece together a more complete picture for her audience, and by extension, the viewer. Director Shetty deftly hides the focus of the story while managing to engage the audience in the lives of various big and small time hoods, nobodies in love, and a vivid cast of characters all in need of something to make their lives make sense.

We first meet Raghu, a man on a mission to extricate himself from the life he's made by stealing a red bag containing some unnamed treasure that will, we are told, pay for he and his mother, Ratnakka, to leave their marginal lives in India and begin fresh in Dubai. In the time between Raghu's brief, but emotional return to his mother's home from self-imposed exile in Bombay and a promised reunion dinner, something goes wrong and we are left to wonder what it was.

The film is largely structured as a series of cliffhangers, not unlike real life. Unlike in most films, where the viewer is an omniscient presence with the ability to oversee the proceedings. Rakshit Shetty presents the film the way the reporter does, as a series of stories, all eventually weaving together to make one coherent narrative of an event that isn't unveiled until the final reel. As such, the film takes the classic Ebert idea that "it's not what [a movie] is about, it's how it is about it", and exercises it to the grand success of making the viewer a part of these lives without worrying about the ultimate outcome, because no one, neither on screen nor off, really knows what happened. The event is the ultimate MacGuffin, in that it doesn't even get a name or specific description, but it drives the story from the inside-out.

To retell each of the films chapters would discount a lot of the work that Shetty put into the script, as it is not a film to be synopsized, but a film to be experienced. As Seen By the Rest is more than just an amazingly intricate puzzle box of a story, it is a compendium of powerhouse performances from a blazing ensemble cast, each of whom use their respective screen time to make an impression far beyond the film's ending credits. Not surprisingly, the boldest performance comes from Shetty himself, as small time, life long hood Richard Anthony AKA Richi. Richi owns the screen in the same way he owns a room when he walks in. At one point during the film he hears a rumor of his having broken a man's nose in a fight, but upon discovering that man's nose unsatisfactorily smashed, he proceeds to do the job right, lest his reputation be tarnished. In a performance not subtly influenced by Al Pacino's Tony Montana in Scarface, Richi swaggers his way through the film as a cohesive presence tying together all of the loose ends and connecting each character to the others. It's a remarkable performance from a director who understands his characters better than anyone else possibly could.

Far from the only notable performance, Shetty's Richi is merely the loudest and most omnipresent. He is the voice of the film, but it is Kishore's Munna, whose story is saved for last, that is the heart and soul of As Seen By the Rest. Munna tale of unrequited love infuses what could have been an overcomplicated story of cat and mouse into an emotional journey that powers the film's final reels and gives it more weight. Throughout the film, small performances speak volumes, and each of the main ensemble perform beyond admirably. If this were simply a chamber piece without embellishment, it would be recommendable, but As Seen By the Rest is not content to rest upon its well written and conceptualized characters, it's a marvel of modern Indian cinema.

Rakshit Shetty wears his influences on his sleeve, often naming them aloud within the film, and does more than simply write his own stereotypes into the script, he puts his money where his mouth is and shows us what he's thinking. With tributes to everything from Frank Miller's Sin City, to Pulp Fiction, to Scarface, to Bollywood hit Agneepath, and ultimately to Akira Kurosawa's Rashomon, As Seen By the Rest isn't content to be just another film, it is a groundbreaking work in a rapidly maturing new cinema of Karnataka.

More than just another pretty face, Rakshit Shetty is something that Indian cinema is lacking these days, a visionary and an auteur. There are a few out there, but most have to suffer through interminable studio interference, turning their films into glorified commercials for CD soundtracks (Ram-Leela), and the ones who do stick to their guns are often forced to find a market beyond their own border, like Bengali cinema's Q. Shetty has struck a delicate and difficult balance, he's made an entertaining film that works on his own terms and has the potential to find an audience beyond his homeland while still satisfying the demands of his own people. Well done, sir. Well done.