Durban 2014 Review: BETI AND AMARE Is A Bizarre Ethiopian Oddity 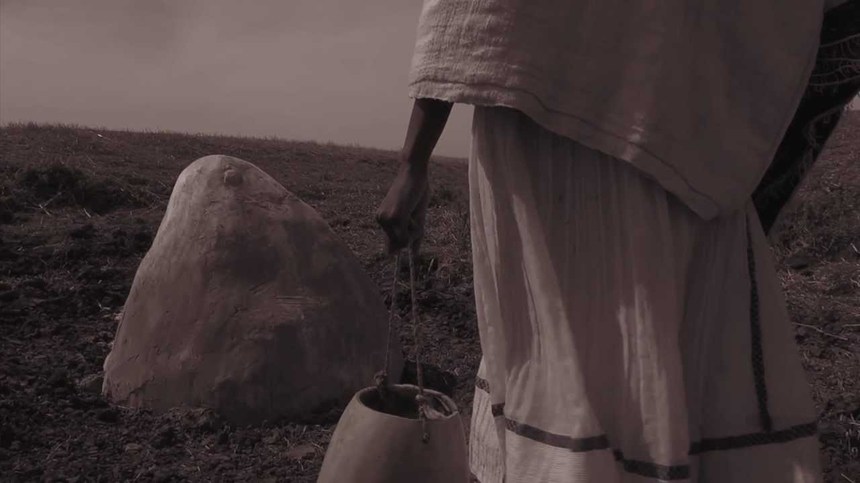 It is 1936 and Mussolini is on the move, the fascist leader's troops pressing into Ethiopia to increase their foothold in Africa. Fearing the worst teenaged girl Beti is sent away from the big city by her mother to live instead with her grandfather in his remote and isolated hut. Yes, it's a meager existence with just the old man and a sickly goat in a one room mud wall and straw roof hovel but if it keeps Beti safe from the imminent violence then it is surely worthwhile. But when the goat dies Beti is left alone as grandfather goes in search of new livestock to supply their basic needs and Beti is left alone to fight off loneliness and the advances of the trio of local thugs who have declared themselves the area's protectors from the Italian forces.

And then Beti has a dream. A strange dream about a young man - though possibly (probably) not actually a man - falling from the sky. And the dream comes true with Beti discovering a sort of meteor-egg by the local watering hole which the man - who she will dub Amare - emerges from, confused and incoherent and sporting a pair of very sharp teeth.

Told with the rhythms and tone of oral legends passed down through generations, Andy Siege's Beti And Amare is an oddity on any number of levels, an agrarian tale laced fascist aggression and built around the blossoming relationship between a simple Ethiopian girl and her possible alien, possible demon, possible angel, possible vampire-werewolf creature. Shot on an absolute shoestring with a reported budget of only $7000 Beti And Amare is most definitely rough around the edges - the VFX, in particular, are rather primitive - but the simple fact that Siege would even try to marry such disparate elements gives the film a sort of what-on-earth-am-I-watching urgency that holds the attention even when the narrative bogs down.

Beti And Amare never really works, not entirely, with the limitations of its creation posing such very extreme limitations on a film of such high ambition but in those moments when its parts come together you can't help but feel that Siege may be some sort of outsider savant, someone who if given further chances and better resources would make something truly compelling and very, very weird. It is a film that will be fringe even for seasoned curiosity seekers but which also showcases its creator as someone truly gifted with a striking image and unusual technique. While Beti is mostly concerned with who and what Amare is we could all be asking the same thing about his creator for there is no way at all of telling where Seige may go after this.

Do you feel this content is inappropriate or infringes upon your rights? Click here to report it, or see our DMCA policy.
beti and amarecultdurbanethiopiareviewSci-FiAndy SiegeHiwot AsresPascal DawsonYonas An KidaneBiniyam KoreFantasyRomance