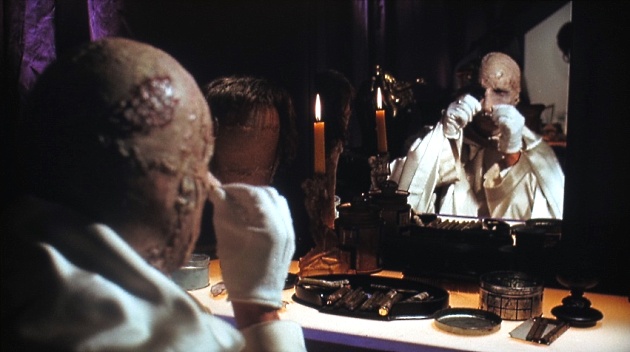 (Love means: following your wife in death, after first killing off everyone you hold responsible for her demise...)

In the late fifties, sixties and early seventies, horror fans young and old flocked to cinemas to see three iconic actors: Christopher Lee, Peter Cushing and Vincent Price. All three brought class to even the crappiest of pictures, all three were better actors than they were being given credit for at the time, and all three possessed wonderful speaking voices.

But on that last point, Vincent Price was the winner. As a kid, I primarily knew Price's voice from the monologue at the end of Michael Jackson's song Thriller. But I became a full-fledged fan of Vincent Price when I saw The Abominable Doctor Phibes, a horror film from 1971 in which he played a brilliant, sadistic and devious killer. Not a big fan of horror, nevertheless I loved the film, and especially Price's portrayal in it.

So, when distributor Arrow announced it was going to release a boxset containing both Doctor Phibes films, on Blu-ray no less, my wallet emptied with an audible pop.
What are these films about? Read on... 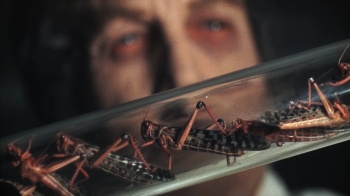 In The Abominable Dr. Phibes, it's England in the 1920s, and a string of bizarre, gruesome deaths is baffling the police. The pattern seems to be following a list of old Hebrew curses aimed at Egypt, and the victims had all worked together on the same botched operation a few years earlier.

That medical mishap had cost the life of Victoria, the beautiful young wife of the brilliant Doctor Phibes, himself presumed dead after a car accident.
But guess what? Phibes, though hideously burnt and deformed, is alive and kicking. And he has set a diabolical plan in motion to exact his revenge on all those he deems responsible for the death of his wife...

In Doctor Phibes Rises Again, Doctor Phibes eh... rises again. In a certain Egyptian tomb, a brief conjunction of moon and stars will create a once-in-a-lifetime opportunity for immortality, and Phibes intends to use it for himself and his undead wife.

But when Phibes reaches the tomb, he discovers he is not the only one: an expedition of archaeologists, also in search of immortality, has found their way into the crypt! An enraged Phibes commences to use his heinous sadistic trickery to get rid of them all. 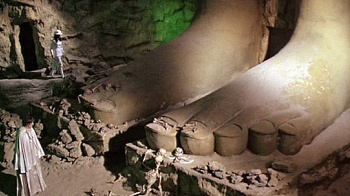 When the Dr. Phibes films are described, people often use the words 'camp' and 'style over content' (as if style cannot be part of the content). While those descriptions are not necessarily wrong, they do tend to give the impression that these films are some sort of empty glam-fest. And they are not.

If I had to describe these films in a single word, it would simply be 'fun'. Vincent price is having the time of his life here, and his infectious glee, combined with the crazy art-deco visuals, gives these films a special... vibe... of their own. Phibes is a harsh, insane monster, and several of his victims sure do not deserve what's coming to them, but it is difficult not to feel for him either.

The first of the films is definitely the best. The Abominable Dr. Phibes is original, clever, looks and sounds great, oozes style, and always entertains, even when the proceedings careen into anachronisms and impossibilities. And the cast-list is a who's who of classic British cinema (with the odd American thrown in).

The second of the films is a much more disjointed affair. An obvious cash-grab after the success of the previous film, Dr. Phibes Rises Again was torn from the hands of director Fuest, re-cut (badly) against his wishes, and unfortunately that is the only version left to us. But while I remembered it as a thundering disappointment, I actually enjoyed revisiting it a lot more than I expected! Vincent has plenty of great moments, and there are tons of little jokes to be seen. While I wouldn't recommend it on its own, it's actually still a fun add-on if you loved the first film and crave some more Phibes afterwards. 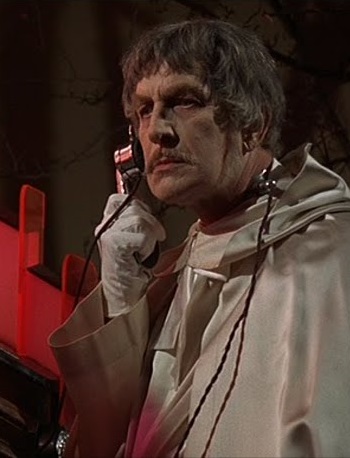 On To The Discs:

Arrow has released the two Dr. Phibes films as a limited edition boxset. Only 3,000 of these have been made, so if you're interested, catch them while you can. Both films are coded for region B so make sure your player can handle that.

As for the contents: having discovered Phibes during the age of VHS, I can wholeheartedly state that the video quality of the blu-rays blew me away. Both films are incredibly rich in color, details, visual jokes, and the sharp image adds layers of depth and beauty.

The audio is no slouch either, with the original uncompressed 1.0 soundtracks being solid. On VHS these waved up and down in tune at will, so hearing them as intended is a boon indeed. Subtitles for the hard of hearing are included.

The Abominable Dr. Phibes comes with two commentaries. The first is with director Robert Fuest, recorded a short time before his death. While insightful (obviously), the old man talks slowly and isn't always easy to understand.
The second commentary is with writer/creator William Goldstein and his son, and is a much more cheery affair. The two are obviously still having fun with the character of Dr. Phibes, hinting at a third film, on-line shorts, and such. But mostly they overflow with facts and gossip regarding the making of the two films. Definitely a fun track!

Dr. Phibes Rises Again comes with a commentary of its own, this time by critic Tim Lucas, who proves to be a veritable talking encyclopedia.

With the original production company having gone the way of the dodo, all commentaries are unusually candid, as the speakers do not need to avoid expletives and foul slurs. Which is great! These are easily the best extras.

On top of that both films have their original theatrical trailers (with the first one still missing the word "Abominable"), and the second film has a few short mini-documentaries, of the eight-to-fifteen-minute variety.
"Dr. Phibes and the Gentlemen" has the actors from The League of Gentlemen reminiscing about seeing Phibes as kids. "Daughter of Phibes" is an interview with Victoria price, Vincent's daughter (who bears an uncanny resemblance to her father). And in "The Doctor Will See You Now", biographer David Del Valle discusses Price and Phibes some more.

There is some overlap in these extras but not much, and all are definitely welcome additions for fans of either Vincent Price or Dr. Phibes.
The boxset also includes a booklet of 100 pages, containing a collection of articles and interviews about the films.

All in all I had loads of fun with this boxset, and therefore it comes highly recommended!
Below are some pictures, showing what the set looks like. 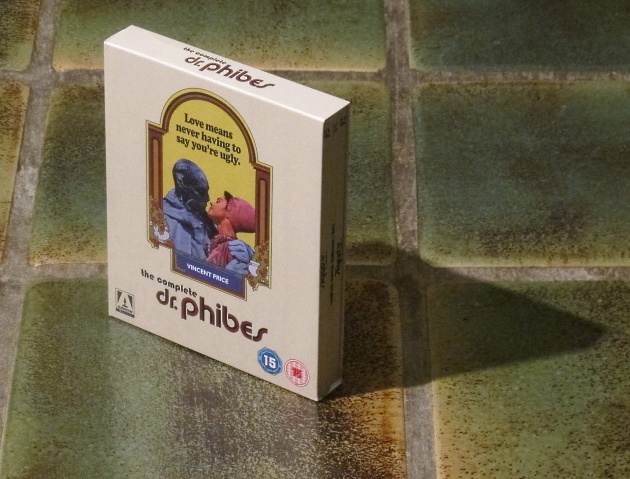 And here it is! It may not be the flashiest packaging we've ever seen from Arrow, but it sure is pretty, and fitting of the films. 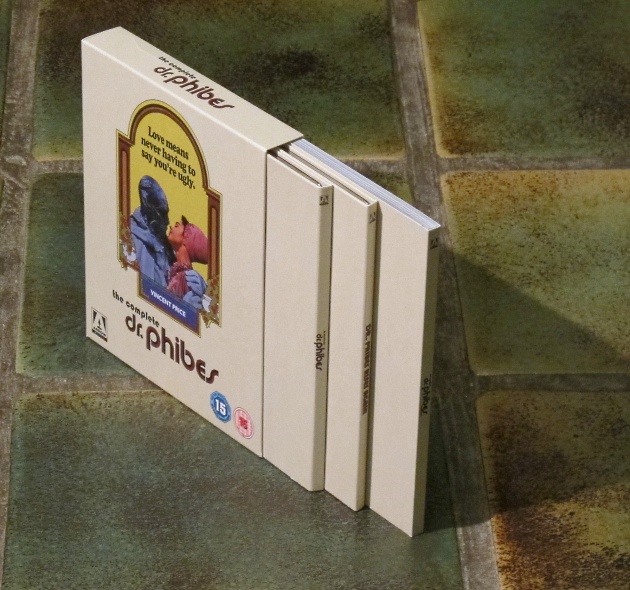 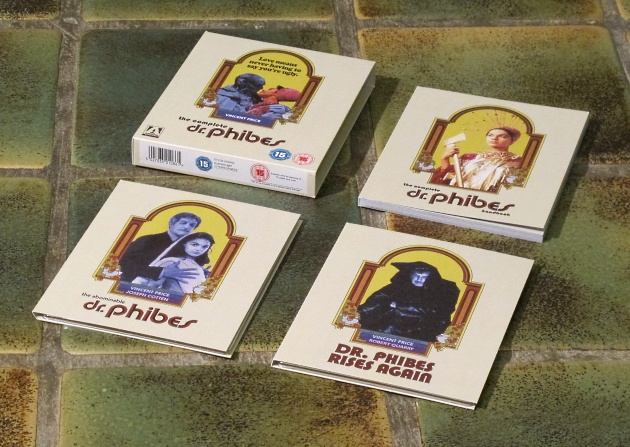 All contents shown: the two films, each of them in their own disc-holder, and the booklet. 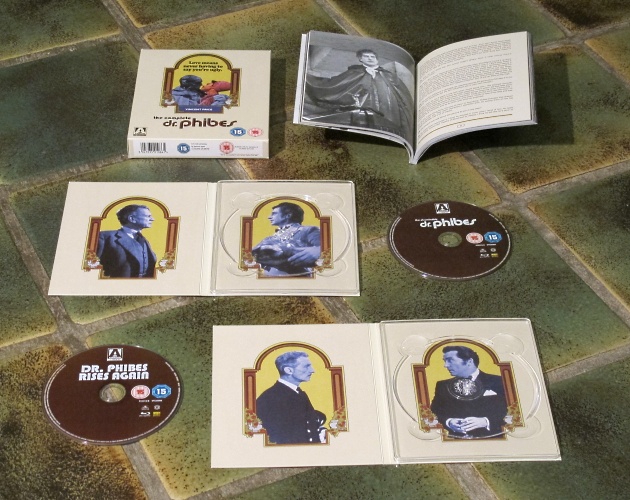 All contents opened, the boxset shows nice consistent designing throughout all of its elements. 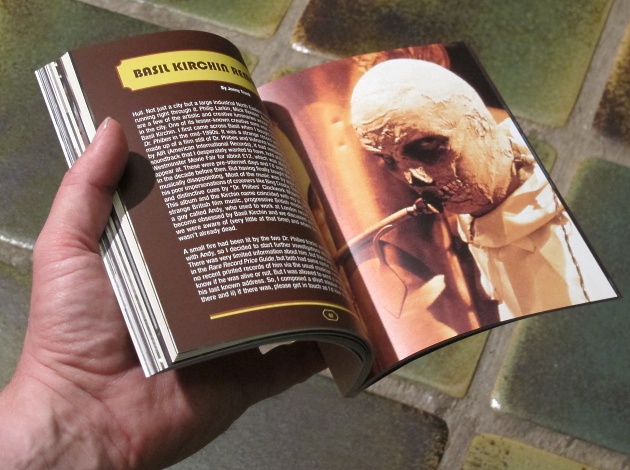 While the extras on the discs are certainly nice (especially the great commentaries), the booklet is not to be sneezed at. In its 100 pages, you can find a good collection of photographs, articles and interviews, all interesting and on-topic.

More about The Abominable Dr. Phibes