Cannes 2014 Review: A GIRL AT MY DOOR Is Korean Cinema At Its Finest 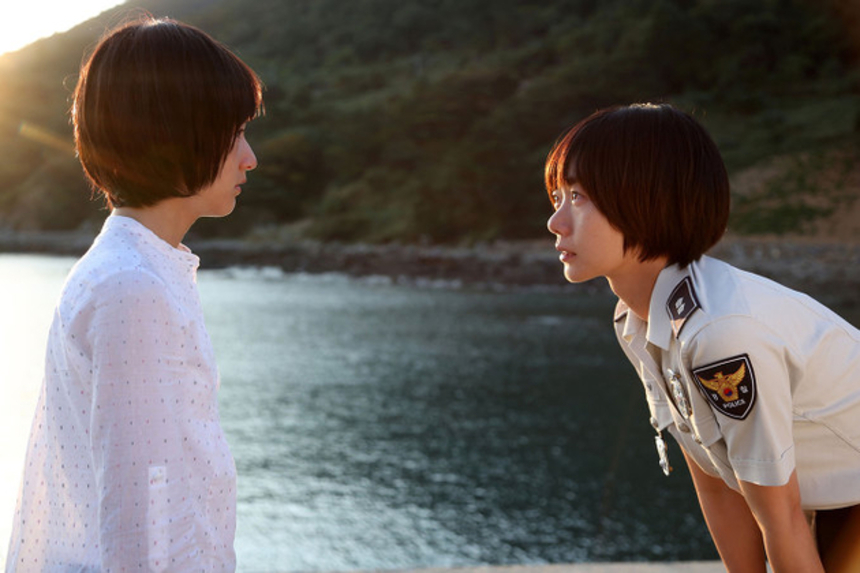 Screening in the Cannes Film Festival's Un Certain Regard section this year is A Girl at My Door, a film that is so well-wrought that one can't help but be swept up in its artistry, which effortlessly plunges us into an intellectual reverie. The film features the return of Bae Doo-na, following back-to-back Hollywood blockbusters, and teenage actress Kim Sae-ron. It also boasts Lee Chang-dong as a producer, whose influence over the film will not go unnoticed.

A Girl at My Door stars Bae Doo-na as Young-nam, a police captain who has been forced to transfer to a remote seaside town following an incident in her previous district. There, she meets Do-hee, a precocious teenager who is regularly beaten by her drunkard of a father. Young-nam takes the young girl under her wing but soon, their unusual living arrangements begin to draw scrutiny from the locals. Among other things, this is a work that concerns a society that is content to demonize certain taboos so long as a shroud is maintained over the deep-rooted problems that stare them in the face on a daily basis.

The film opens with the whir of cicadas and the sun beating down on the verdant summer soil as Young-nam drives into a seaside village. Up ahead, Do-hee is playing with a frog by the side of a road. Young-nam drives past, inadvertently easing into a puddle and dousing Do-hee in rainwater. She stops, steps out of the car and they stare at each other for a long beat before Do-hee dashes off into a field. From the outset, an ominous overtone hangs over their inextricable relationship. Shortly thereafter, the film's title appears over a symmetric shot of a sun-drenched field, unmistakably recalling the opening of Bong Joon Ho's Memories of Murder (2003).

A Girl at My Door is a film about relationships and this focus is reflected in the mise-en-scene, which features an abundance of two-shots. On opposite sides of the frame and at an equal distance from the camera, characters perpetually face each other on screen. As they slowly develop their relationship, Young-nam and Do-hee are frequently framed this way. Beyond the height difference of the actresses, there is almost always something in the background that splits the frame in two. Another two-shot between Young-nam and Do-hee's father in the police station also features a barrier, but in this shot, Young-nam breaks through it as she assertively walks towards him, and the camera reframes. She has thrown down the mantle and thus becomes Do-hee's guardian, and the barriers between them (literal and figurative) begin to disappear.

Thoughtfully executed and laden with metaphors, Jung's film is a real treat for anyone not looking to be spoonfed their narratives. One particularly striking image comes early on, when Young-nam follows behind Doo-hee at night, happening upon the sinuous and bushy path that leads to the girl's home. Labyrinthine, the trail is atmospheric and foreboding and as it leads to Doo-hee's poor dwelling, it feels like it's hiding a secret. This image comes full circle later on when Young-nam dashes through the path once more, but this time from Do-hee's home. She winds through it until it opens out on to the expanse of the ocean. As Young-nam reaches the end of the path, she slows, and as we see her from behind, her slender, awkward frame is engulfed by the coast. The truth has been released but now finds itself in vast, uncharted waters. In fact, water frequently appears as a symbol throughout the film.

Bae Doo-na has appeared in some of the most famous films of modern Korean cinema. She possesses a natural sensitivity that has allowed her to incarnate characters operating around the fringes of society. Playing someone who is both at the center of society (as a police officer) and on the very edge of it, Bae excels as Young-nam. Much of A Girl at My Door is shot in closeup and with Bae's keen expressions in the frame, the film is all the better for it.

For her part, Kim Sae-ron has developed a reputation for playing troubled young girls and is no stranger to characters like Do-hee. However, this role called on Kim to show more layers and depth than she has previously done. Her timidity, precociousness, anger and curiosity are each vividly drawn while also feeling part of a well-formed whole. Lastly, Song Sae-byeok hits a career high as the abusive father. Song's awkward and buffoonish characters have been welcome fixtures in Korean comedies, but here he shows a completely new side of himself. His squelching cadence and lanky physicality meld into a magnetic antagonist.

Harder to ascertain is who the brains was behind this magnificent feature. The film's tone owes a great deal to its producer Lee Chang-dong, with a mood that echoes his most recent pictures Secret Sunshine (2007) and Poetry (2010). It so happens that Lee was Jung's teacher at the Korea National University of Arts. The film is also well rounded to a degree that one could scarcely attribute to a neophyte in the director's chair. Elements in the film, such as its feminine touch, certainly denote a different presence behind the lens, but one can't help but wonder what kind of a film Jung will make next, without Lee's guiding hands.

Gripping from start to finish, A Girl at My Door is a film with its fair share of high drama, but unlike most of its Korean compatriots, it never overplays its hand and treats its audience with respect. It may be a little unclear how big of a talent we've just been introduced to in July Jung, but there's no question that her film is the real deal. A Girl at My Door is Korean cinema at its finest.

More about A Girl at My Door