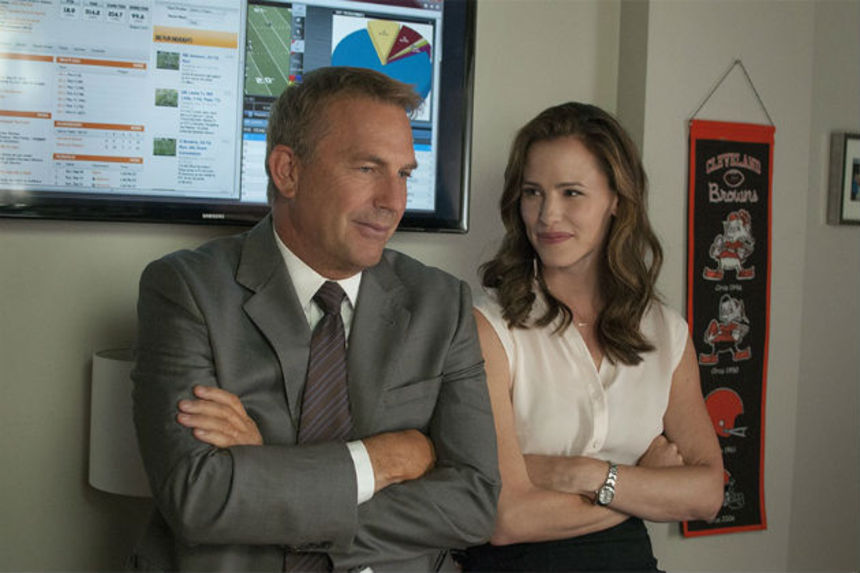 A lethargic version of Moneyball that has been licked clean by the official approval of the National Football League, Ivan Reitman's Draft Day is a kitten desperately pretending to be a lion.

The film plays like a 109-minute commercial, advertising the upcoming television broadcast of the professional (American) football draft, which drags on for many hours over two -- or is it three? -- days and has been known to drive grown men (me! me! me!) to drink after a single round. For those involved, of course, it's a tense, nerve-wracking time that affects their careers -- or whether they'll even have a career. Fanatical observers derive enjoyment as well, as they compare their picks with those in the managerial ranks, and professional analysts share their insights, based on months of research and experience.

For everyone else, however, screenwriters Scott Rathman and Rajiv Joseph have lobbed multiple dramatic grenades at their protagonist, Sonny Weaver Jr. (Kevin Costner). Before he even gets to the office on draft day, his girlfriend Ali (Jennifer Garner) informs him that she is pregnant. BOOM! As general manager of the Cleveland Browns, he must use his #7 first-round pick wisely, lest he incur the wrath of the team's owner (Frank Langella), who insists that he make a splash. BOOM!

Sonny likes a star running back (Arian Foster), a good kid whose father (Terry Crews) previously played for the team, but he likes defensive player Vontae Mack (Chadwick Boseman), who needs to provide for his two children and his mother, even more. BOOM! If Sonny picks the wrong player, his new head coach (Denis Leary) threatens to quit. BOOM! Sonny is unexpectedly offered the # 1 pick of the draft, which would allow him to make a splash and select the uncontested top college player (Tom Welling), a quarterback, but he'd have to trade away his team's future, and besides, the player sounds too good to be true. BOOM!

Oh, yes, and Sonny's father, the team's legendary, previous head coach who Sonny fired the previous year, died last week. BOOM! And the funeral is today. BOOM! And his mother (Ellen Burstyn) shows up at the office, begging him to come. BOOM! And the usual receptionist is not available and so an intern must figure out how to make coffee and answer the phone on his first day. BOOM! BOOM! BOOM! 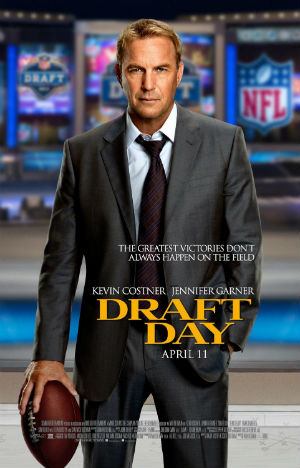 All those melodramatic explosions, however, are more apparent in print than on screen, where they land with soft thuds, which suggests that the script might have been better served by other hands. Someone -- most likely Ivan Reitman, but let's not be hasty in assigning responsibility -- decided that split screens would really jazz up all this talk talk talk, especially when two people are chatting on cell phones. So we are treated, repeatedly, to someone talking, then the screen splitting to reveal another person talking, whereupon one of them will walk from one side of the screen to the other while talking, apparently walking over the other person. The trick is distracting (rather than illuminating) the first time, then becomes wearisome as it's repeated multiple times.

So much for visual inventiveness. As for dramatics, those are blunted, perhaps by a desire to receive the seal of approval from the NFL. Thus, there's no talk of spousal abuse or drug abuse or sexuality, or even being mean to someone else. No, the big question mark that hangs over the star quarterback exists largely in Sonny's mind, and comes down to honor and integrity as he perceives it. Kevin Costner gives a resolute, friendly performance as Sonny, but his star turn is not enough to galvanize the film, especially since (nearly) all the other characters defer to him. Indeed, it takes a cameo by Pat Healy in the fourth quarter to bring the proceedings to life, all too briefly.

Absent much football footage, Draft Day faithfully sticks to the sports drama playbook, refusing to call any audibles as it marches toward the goal line. As time runs out, it fails to score, repeatedly fumbling multiple opportunities to become a good, stirring movie.

The film opens wide in theaters across the U.S. and Canada on Friday, April 11.

Do you feel this content is inappropriate or infringes upon your rights? Click here to report it, or see our DMCA policy.
American footballDenis LearyfootballIvan ReitmanJennifer GarnerKevin Costner