SXSW 2014 Review: SPACE STATION 76 Is A Retro Future Worthy Of Its Buzz 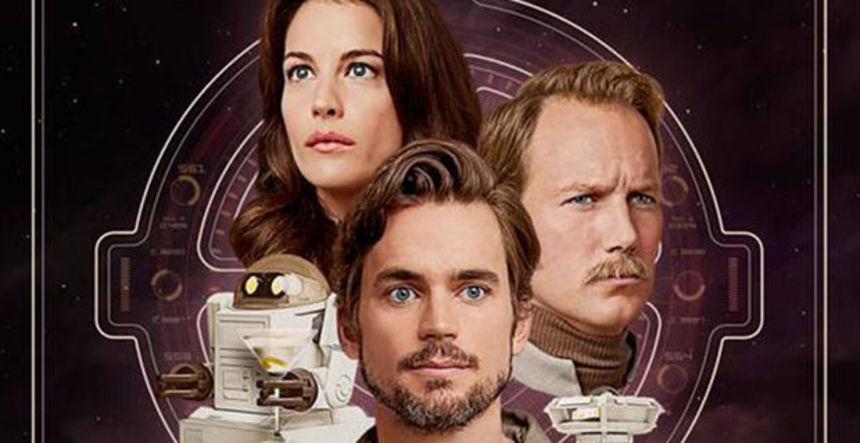 When I first heard the very far-out premise of Space Station 76, which the film's press release describes as "a comedic drama about a group of people (and several robots) living on a space station in a 1970's-version of the future," I was immediately filled with eager anticipation for what seemed a shoo-in to be one of SXSW's standout films. How could a movie that exists within a dated imagining of the future possibly go wrong? Then, early in the week, standing in line for the midnight movie, Starry Eyes, shit-shooting with a fellow cult fan, the wind was promptly removed from my sails hearing his luke-warm review to the effect of "Space Station 76 is an underwhelming, overly-long SNL sketch. I was sad that night to move Space Station further down on my must-see priority list.

Normally I reserve my opinions for first-hand experience but with the cacophonous possibilities of cinematic quality cohabiting within the few blocks of downtown Austin, SXSW makes it a little trickier to take chances. Then some time mid-week I began second-guessing that decision upon learning that Space Station 76 had won an additional Buzz Screening, a slot reserved for films that have accumulated enough word-of- mouth to warrant a FOMO show time at the awesomely massive Vimeo Theater. It was there amidst a crowd of stragglers on the street, most of whom entered the screening without an inkling as to what they were about to watch (the most fun aspect of buzz screenings is that titles are withheld to the public to lend an air of mystery to the proceedings), that I would first fall in love with Space Station 76, a future cult-classic that I'm destined to watch and re-watch countless times.

I spent the beginning of the film finding it hard to believe that the rich comedy the grateful Vimeo Theater audience and I were basking in would run out of steam as Larry-Lineup had suggested. Sure enough, not only did the comedic gold of the first act not let up, but after the sight-gags of the retro-future universe were established, the film only graduated into a richer tone full of smarter character-driven laughs, heavily aided by intelligently layered performances from the likes of Patrick Wilson, Liv Tyler and the rest of the strong cast I'd love to see more from - especially newcomer Kylie Rogers, a charming little girl with an undeniably adorable presence. Finally, after the film's closing image left my audience neighbors and I audibly breathless, my feelings for Sammy Starry Eyes were that of pity for a man who missed the boat on one of the most unique comedic experiences I've had in ages. For to refer to the work on display in Space Station 76 as an elongated sketch implies such an unfortunately vacuous reading, it makes me suspect Barry Basher fell asleep halfway through the film.

Even from the get-go, Space Station 76 is worth far more than its starting point. Sure, the kitsch of seeing a socially-ignorant space crew interact within their closed-minded ideas of sexuality, race, gender, and health is amusing - for example, the heavy amount of second hand smoke circulating in a galaxy far, far away - but when the film gradually shifts from hilarity to utterly fascinating, Space Station 76 reveals its true colors as a socially subversive commentary on clashing ideology having far more in common with Todd Haynes' Far From Heaven than Star Trek or, ahem, SNL. For unlike Star Trek, though the two feature crews suspended in an enclosed environment attempting to overcome cabin fever and focus on the mission at hand, despite their faults and (often ignorant) personal boundaries, Space Station 76's characters are a crew of real human beings doing the best they can to overcome loneliness and find their identity within a restrictive society of set ideals, not so unlike how marginalized communities must overcome oppression to find personal freedom through honesty.

In life, there will always be people who feel they know what's best for the other, but at the end of the day we are all equal in the same mission to cohabitate this planet with peace, empathy, and respect for our neighbors. It isn't always easy, but as Space Station 76 wisely meditates with genius comedic allegory, it helps for all to keep in mind, ladies and gentlemen, we are floating in space.