SXSW 2014 Review: HOME, Quiet Horror With A Touch Of The Creepy Crazy 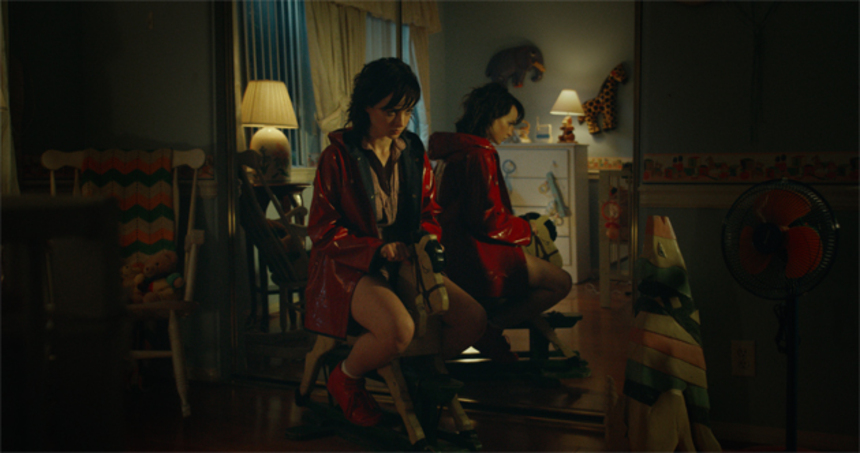 A teenage girl in love with a teenage boy plays a cryptic game. A twenty-something woman goes about her rounds as a real estate agent in a depressed market, then visits her younger sister, a depressed artist.

These three women play key roles in Home, a quiet horror film with a welcome touch of the creepy crazies. Writer/director Nicholas McCarthy, who made his directorial debut with The Pact, is still not interested in holding hands with the audience, as far as creating signposts to make it easy to follow the narrative initially. Whereas his earliest effort held little tension or suspense for me when I saw it in 2012, however, he paints with a larger palette in Home, with more well-placed jolts, to greater variety and effect.

To be clear, Home is not a thrill ride filled with explosive action, nor does it rely on violence for its pay-offs. Instead, it creates a disquieting atmosphere, centered around a mostly empty house, and then portrays the effects of that atmosphere upon the three women.

Hannah (Ashey Rickards), the teenage girl, gets things rolling by participating in a perplexing game of three-card monte (with paper cups). After she wins that, the stranger informs her that she has been 'chosen,' and that she can earn $500 by going to an isolated crossroads and saying her name out loud, so 'He' will know her name when 'He' calls. It sounds like malarkey, but she does it, and later she finds out the consequences for what she has done.

Leigh (Catalina Sandino Moreno), the real estage agent, is a take-charge person who confidently sells her abilities to a couple who want to sell their house. When she examines the house, she notes an odd assortment of furniture left behind, evidence of a fire, and a mirror that is covered up for some reason. She also sees a visitor.

Leigh talks with her younger sister Vera (Naya Rivera), the depressed artist, about the importance of family. Both their parents are dead, and Leigh has clearly taken on the parental role; she can't have children herself, but she wants Vera to find a good guy, get married, and have her own family.

The disparate story threads are strung out loosely and eventually tightened to provide a guideline through the gloomy atmosphere. Home is bolstered by its performances; the three woman are, to a certain extent, victims of a mysterious occult force, yet they respond with strength and the proper degree of horror to what is happening to them.

McCarthy builds on what he did with The Pact and the result has greater impact, if still a bit too diffuse for its own good. Home is not necessarily a movie that will knock anyone's socks off, but I was sufficiently unnerved to be frightened of my own shadow when I opened my motel room door an hour after watching it. That's what I call a time-delayed scare.

(Full disclosure: XYZ Films, in which ScreenAnarchy founder and editor Todd Brown is a partner, was involved in the making of the movie. He was not involved in the editing of this article.)

Home had its world premiere at SXSW last night. It screens again on Tuesday, March 11, and Friday, March 14.

Do you feel this content is inappropriate or infringes upon your rights? Click here to report it, or see our DMCA policy.
Ashley RickardsCatalina Sandino MorenoNaya RiveraNicholas McCarthy