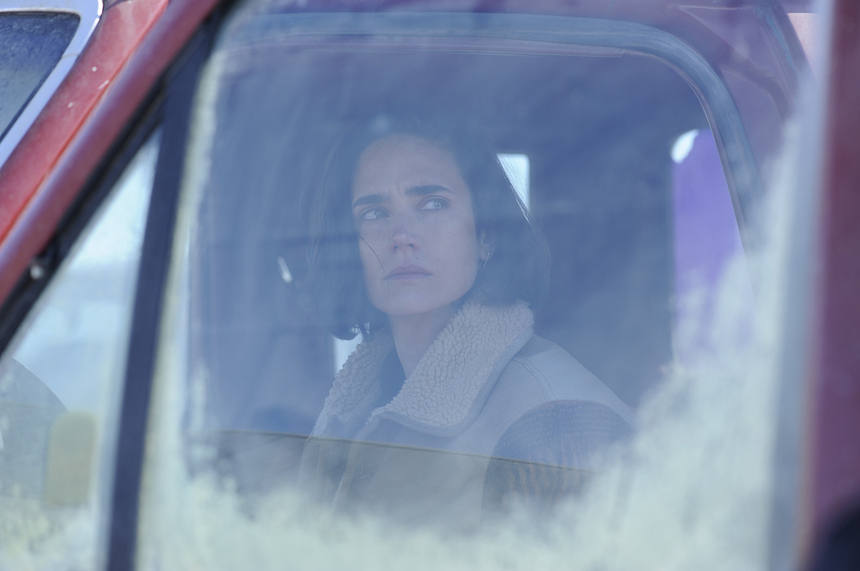 The sense of touch can be tricky to convey in film. A filmmaker must rely upon visually accurate information in order for the spectator to 'feel' the sensation. Touch is very prominent in director and writer Claudia Llosa's Aloft, how it conveys love, hate, fear, anger, and sorrow. Llosa is a steady hand at the wheel, giving us a moving, intimate drama with fine performances by Jennifer Connelly and Cillian Murphy.
One half of the film is set twenty years earlier: Nana (Connelly) lives in northern Manitoba, working part-time on a farm (where she is having an affair with her married boss) and trying to raise her two young sons, Ivan and Gully. Gully has a terminal illness; in a last-ditch effort to save him, she takes the boys to visit a healer known as the Architect. An accident caused by Ivan's pet falcon destroys the Architect's attempt to cure another boy; but it turns out it might be Nana who has the real healing power. In the present, the now married Ivan (Murphy) is a professional falconer, estranged from his mother. He is approached by a reporter (Melanie Laurent) who needs his help to find Nana, now living in the far north with her followers.
Llosa eschews unnecessary exposition in favour of brief mood moments and sparse dialogue to bring the spectator into the story. Her camera mainly remains tight in on her characters; it is a kind of tightness felt by those who live in cold places, where the constant layers of clothing, the constant struggle to stay moving and warm, mean a kind of entrapment at the seeming edge of the world. Even talking is a struggle; words cannot be wasted, When Llosa does provide large landscape shots, there is little to see but snow and ice, the world stripped away of all adorment, so all that is left is the beauty of nothingness.
Nana clearly lives on the edge of working-class poverty, and her struggle to save Gully means that Ivan is becoming angry and resentful. Add in Nana's discovery of her own healing powers, her exploration of the connection between art and nature, and her slow abandonment of Ivan in a way becomes mutual. This is nothing that hasn't been explored in film before, the difficult relationship between mother and child, and the resentful child who grows into the angry man. And where the film falters is this lack of narrative originality. It does become fairly predictable, including one of two moments between characters that fall into cliché. At nearly two hours, much could have been cut and it likely would have held together better, with unnecessary moments abandoned in favour of what is already a fairly stripped-down story.
But where Llosa does succeed is creating a wonderful atmosphere, a tension between the magic realism of healing and art, and the harsh reality of the cold and the struggle keep home and family together. I would even hesitate to use the term 'magic realism', even though it is implied to a certain degree. The characters are all at the edge, standing on both the literal and metaphorical frozen lake, watches the cracks form around their feet. Grabbing a hand to pull you out is the only option.
Sign-In to Vote
Tweet 0 Submit

Do you feel this content is inappropriate or infringes upon your rights? Click here to report it, or see our DMCA policy.
Cillian MurphyClaudia LlosaJennifer ConnellyMélanie LaurentOona ChaplinDrama

If you're standing on lake ice watching cracks form around you, you're an idiot. (If you're wandering around on said ice in the dark, you're a moron as well.) And if you're from Minnesota-- where at least half of this silliness takes place-- you don't go to faith healers: you go to the doctor. Minnesota has some of the finest medical resources and research facilities in the world. "Magic realism," my foot. We survive in this environment because, yes, we know how to dress for the weather-- but common sense, not new-age mumbo-jumbo, is what keeps us alive. Keep your daffy metaphors to yourself, Ms. Llosa: this one is truly misplaced.

If you're taking the time to bitch and moan about a film you haven't even seen, you're an even bigger idiot. And if you feel that you personally possess absolute omniscience regarding the spiritual beliefs of every single resident of your state, you may well be the ultimate moron. Have you been taking a personal census?

And where does it say that this film was set in Minnesota, anyway? Appears to me that it was filmed in Canada. Take the chip off your effing shoulder about Minnesota and calm down. No one cares what happens in your state. I promise you.

Sure, there are good doctors in Minnesota. But that doesn't mean there aren't people there who avoid physicians in favor of spiritual healing. The case of Ian Lundman comes to mind. He was a boy who died in 1989 at age 11 in Minneapolis (of, of all things, diabetes) because his parents 'didn't believe in' taking him to doctors. Minneapolis isn't exactly a place where there is a shortage of well-practiced physicians, yet his family had a belief system that precluded them involving a doctor in his care.

Lesson? There are faith healers everywhere. Even in your state.

...except it DOES happen in Minnesota, where there is a legal loophole which states spiritual healing is acceptable and has in fact been reason for acquittal in some cases:

You've been banging this drum for ages, Kim. Nobody is listening.

Sounds like this movie has bigger problems than the location.

Being a fan of both Madeinusa and Milk of Sorrows, I am still very much looking forward to see her Hollywood movie debut here.