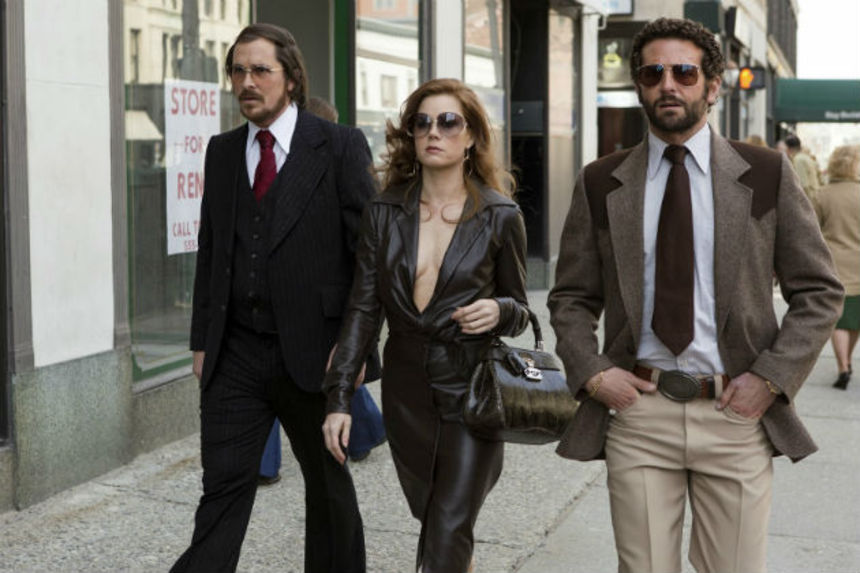 Nearly everyone in it, from the self-admitted con men to the supposedly upright FBI agents, is conning someone else. Sometimes it's for reasons that are arguably altruistic (like tricking a criminal into helping you catch bigger criminals), and sometimes it's for personal reasons like love and jealousy. Either way, if there's one thing we Americans are good at, it's talking people into things. Originally, Eric Warren Singer's screenplay was called "American Bull****," which is even more to the point.

The year is 1978. The hairstyles are big, the clothes are flamboyant. Irving Rosenfeld (Christian Bale), a portly, disheveled fast-talker and inveterate con artist since childhood, owns a few dry-cleaning stores but makes his real money through phony money-lending scams. In this latter enterprise he finds a new partner, Sydney Prosser (Amy Adams), who uses a fake British accent to lull potential marks into believing she and Irving are trustworthy. (This is surprisingly effective in real life, too.) Irving has a needy, neurotic wife at home, Rosalyn (Jennifer Lawrence), but wants to escape from her, from New York, from everything.

When Irving and Sydney are caught in an FBI sting, the upward-striving agent in charge, Richie DiMaso (Bradley Cooper), makes them a deal: use their expertise to help him make four other as-yet-undetermined busts and they're off the hook. The familiar "crooks help cops catch other crooks" formula is entertaining as usual, with Sydney and Irving's dual narrations filling us in on the comically elaborate methods of baiting a trap and hooking a sucker. ("The more you say no, the more they want in on something," Irving says. "It's so stupid.") But it gets thorny when, in the process of busting small-time criminals like themselves, Irving and Sydney stumble upon opportunities to nab bigger fish -- like bribe-taking politicians and the Mafia. Richie DiMaso is as giddy as a kid on Christmas over the prospects, while his underworld pawns want nothing to do with something that dangerous. 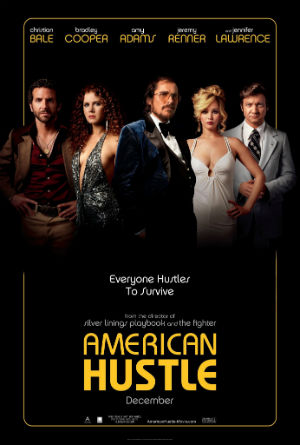 Director David O. Russell (Three Kings, Silver Linings Playbook), more playful than ever, rewrote enough of the screenplay to get a shared credit, and allowed his cast -- many of whom had worked with him before -- to get into character and improvise. Accordingly, the film has a sort of disciplined looseness to it, tightly paced and shrewdly constructed but also ridiculously entertaining. The hair and costumes are key, both in establishing the time period and in reminding us not to take it too seriously.

Bale is mesmerizing as Irving, totally immersed in the outlandish caricature of a man made mostly of pot belly and comb-over. Adams' cleavage is showcased nearly as much as her acting; Lawrence struggles a bit with the New Yawk accent but brings emotion to her semi-tragic dimwit character; Cooper, his tightly permed hair making him all the more punchable, plays the weaselly DiMaso to the hilt.

The expansive story hints at deeper themes -- how we all do things we don't like in order to survive, how the American dream lends itself so readily to exploitation by greedy hustlers -- but you don't get the impression Russell intended to deliver a thoughtful treatise or exposé. He's here for kicks and giggles, and the movie offers plenty.