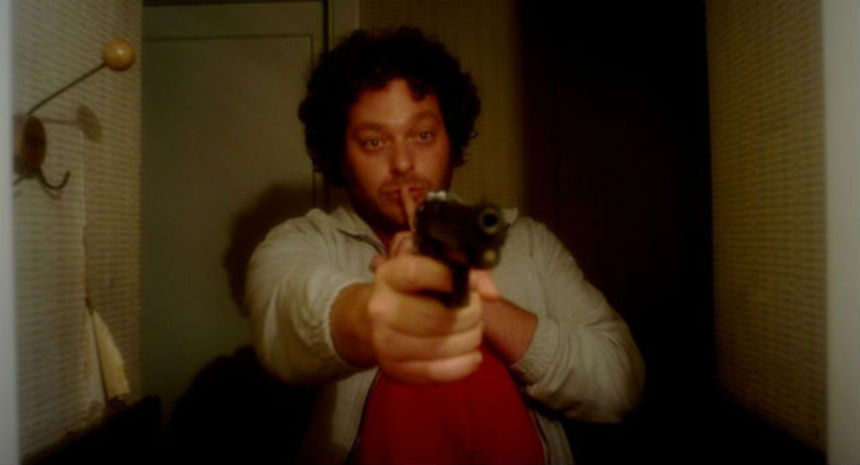 It's too soon to tell whether Oren Carmi is Israel's answer to the Coen brothers, whom he lists among his influences, but his debut feature, the darkly comic Goldberg & Eisenberg, shows promise. I get the impression that a grim sense of humor is crucial to one's survival in Tel Aviv, and Carmi clearly has that going for him, even if some of the other elements of his film are a bit uneven.

Goldberg (Yitzhak Laor) is a nebbish, a timid freelance computer programmer who is eager -- nay, desperate -- to find a girlfriend, and is going about it systematically with the various online dating sites. While waiting to meet a date one evening in the park, he is approached by Eisenberg (Yahav Gal), a gregarious, loudmouthed schlub who offers him a dirty joke to use in his wooing efforts. Goldberg declines with the customary "why is this crazy person talking to me?" semi-politeness.

But for reasons he cannot fathom, Goldberg then becomes Eisenberg's number one subject of fascination. Eisenberg follows him around, stalks him daily at the park, insinuates himself into Goldberg's life, answers his ad for a roommate. Sometimes it seems like he wants Goldberg to be his friend, but other times he appears to be looking for someone to bully. Eisenberg's buddies are sketchy characters too: one of them wears a swastika T-shirt, which I can't imagine goes over well in Tel Aviv.

Eisenberg's boorish actions amount to whimsical harassment at first as he pesters Goldberg with inane conversations and untrue but harmless accusations. (He keeps suggesting he thinks Goldberg is gay, but Goldberg isn't gay, and it's not clear that Eisenberg even really thinks he is, or whether he's projecting his own desires, or whether it's something else altogether.) Is he unaware of the social norms that usually dictate personal interactions? Is he flouting them on purpose? Is there any method to his madness? What, to put it bluntly, is this guy's deal?

Eisenberg graduates to more menacing behavior before long, though it's still vague and non-specific, possibly still nothing more than just some weird guy's unusual personality. When Goldberg starts dating a woman who appreciates his geekiness, Eisenberg steps up his disruption efforts. Things escalate from there.

Whatever type of movie it might sound like this is, it is probably something else. Carmi skips the usual "obsessed stalker" tropes, and he doesn't go the straight horror route, either, though he dabbles plenty in both areas. Goldberg & Eisenberg is often shockingly funny (the ampersand-oriented title puts you in the mind of a wacky buddy comedy), and it's not afraid to get bloody when bloodiness is called for. But it also ruminates on modern loneliness, and what it's like to be single in a big city (i.e., exhausting and discouraging).

Mostly, though, Carmi favors the slow burn, the gradual unraveling of Goldberg's life as this Kafka-esque force of randomness persecutes him. This process is enjoyable and often nerve-racking to watch (it's aided by Bruno Grife's agitated jazz- and electronica-infused score), but the eventual payoff isn't as rewarding as process of getting there is. It feels like we're building up to something good, only to have the tension fizzle out in the end. But I'm interested to see what Carmi does next, as long as it doesn't involve him showing up at my house.

Do you feel this content is inappropriate or infringes upon your rights? Click here to report it, or see our DMCA policy.
Fantastic FestFantastic Fest 2013FF 2013IsraelOren Carmi