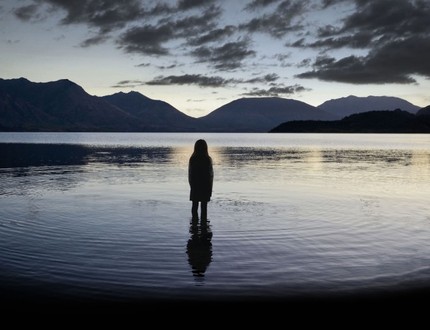 Jane Campion's television miniseries Top of the Lake (which played at Sundance and has aired in Australia, New Zealand, the US and the UK), co-created with Gerard Lee, is a dark mystery, one which uses the landscape of New Zealand to explore those hidden secrets that come flooding out with just a scratch upon the earth and skin. It's the kind of work that keeps punching you in the emotional gut while at the same time giving you strange dreams of metaphysical bliss. There are shades of her previous work, with the intrusion of pseudo-deities, myth and ritual, and gender clash and violence.

Set in New Zealand's south island and starring Elizabeth Moss, Holly Hunter, Peter Mullan and David Wenham, it's ostensibly a crime thriller about a missing girl. Tui is the daughter of Matt Mitcham (Mullan), local drug king; she's 12 years old and pregnant, though she won't say by whom. Robin (Moss) is a former local, returned from her new home in Sydney to be with her dying mother. As a police officer specializing in crimes involving children, she's called in to try and find out who the culprit is. Meanwhile, a group of women, headed by GJ (Hunter), have set up a kind of spiritual retreat next to the local lake. By the end of the first episode, Tui has gone missing, and each episode reveals more about why Robin had to leave, the demons she faces in her return, and the secrets the town keeps coming roaring to the surface.

Certainly, it's hard for any film or series to be shot in NZ, showing its incredible landscape of mountains and forests, without thinking of Lord of the Rings. But this isn't a fantasy world of wizards and magic. This is a world where ancient mythology, created by our ancestors, is allegorized to the contemporary. The characters of Matt and GJ feel like Greek gods Zeus and Hera, supporting opposing sides of a war. Mullan's Matt is a nasty piece of work. A consummate actor, Mullan finds the small shreds of humanity inside, as Matt longs for his daughter's return and has an Oedipal-like obsession with his dead mother. But make no mistake, crossing this man means your death: his bite is far worse than his bark, and his bark is pretty terrifying.
Hunter's GJ is another kind of god: in many ways, like Matt, she is just as cruel, as her advice to her followers is hard as a stone. But she cuts with words, and she can cut anyone, man or woman, and she is not unsympathetic. (They both also have long grey hair, further emphasizing them as Janus god, two sides of the same coin). Trapped between these two is Robin; Moss puts in an incredibly layered performance as a woman irrevocably damaged by a terrible trauma, having managed to turn her life into a force for good, but the damage is brought out by the return home. Most of the story is shot outdoors, and this landscape is both inviting in its beauty and terrible in its vastness and absolute rejection of human interference.

The main thrust of the allegory and situations really are about the gender divide, how men and women approach life/love/violence/the body differently. The hard men of the town resent the women's retreat (although some men do go there), the women are trapped as they rely on work from Matt (and the money it provides) to support their families. Not all the men are bad; Robin's lover Johnno is set up as a reformed bad boy (and almost a kind of wood nymph, living in tents in the forest). But even Robin's boss Al, in an amazing performance by Wenham, who is in Matt's pocket, makes it clear that, even though he might respect Robin's work as a police officer, he will still cut her down to being 'just a woman' in the blink of an eye. As a friend pointed out, all the male characters are predatory in one way or another. The women at the retreat are in one way escaping the confines of gender roles forced upon them by society; they are both the chorus of a Greek tragedy and the Furies, ready to strike. Camion groups these women together in one place, as if suggesting this is the only way that women can escape the trap.

The tension in each episode tightens like a vice, and from one episode to the next. The dialogue is great, but it is what happens between the lines, in the spaces when one actor finishes a line, looking at another character, and Campion (or Garth Davis, who also directed some episodes) shifts the camera, that the real story comes through. Make no mistake, there is nothing subtle about the characters or their intentions. Everything is laid out in the open: the men make it clear that they have (or think they have) the power, both political and physical, and the women (at least most of them) make it clear that they will not tolerate this anymore, even as they continue to fall victim to it, or attempt to reach out to the men with kindness. So, sorry guys, with the exception of a couple of the male characters, you do not come out looking good in this. But considering the dearth of women's voices in film and television, I didn't have a problem with this. (Small tip: if you've ever wondered why women seem to get 'testy' when you hit on them in a bar, this show will explain.)

It comes down to the violence: the violence of the land upon the body, violence of men against women and how women are often powerless to fight it off, and the envy that men have of women's bodies and the ability to procreate that leads to such violence. This is a physical series, and one that will affect the spectator physically; I was a wreck after the penultimate episode. It's also a nod, not only to Campion's genius as a filmmaker, but the new long form television form, which gives filmmakers like Campion a chance to develop work that major film studios have no interest in. With amazing art direction, top-notch performances, and a compelling story, this is by far the best thing I've seen on television this year, or in many years past.

Top of the Lake DVD and Blu ray is available from today. Links are below.

Top of the Lake