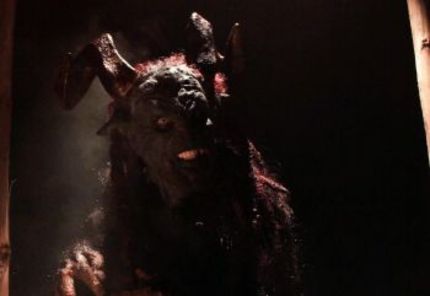 Brazilian splatter master Rodrigo Aragão released today a new trailer for Mar Negro (Black Sea), his third low budget gorefest in five years. It is his biggest production to date and it sure looks to follow the fun and mayhem of the other films of his so-called "eco-horror trilogy": Mud Zombies (2008) and The Night of the Chupacabras (2011). Aragão brought his big guns this time and the trailer shows some very impressive makeup effects designed and executed by the director himself. Here's the official synopsis:

A strange contamination strikes a fisherman's village. When fish and shellfish become evil creatures that transmit death and destruction, the lonely Albino risks his soul for the love of his life, in a desperate fight for survival.

Despite being criminally overlooked by Brazilian distributors, Aragão's films are big hits on the festival circuit. Mar Negro - which premiered at this year's Fantaspoa festival - will most certainly go the same route.

Do you feel this content is inappropriate or infringes upon your rights? Click here to report it, or see our DMCA policy.
Black SeabrazilhorrorMar NegroRodrigo Aragão