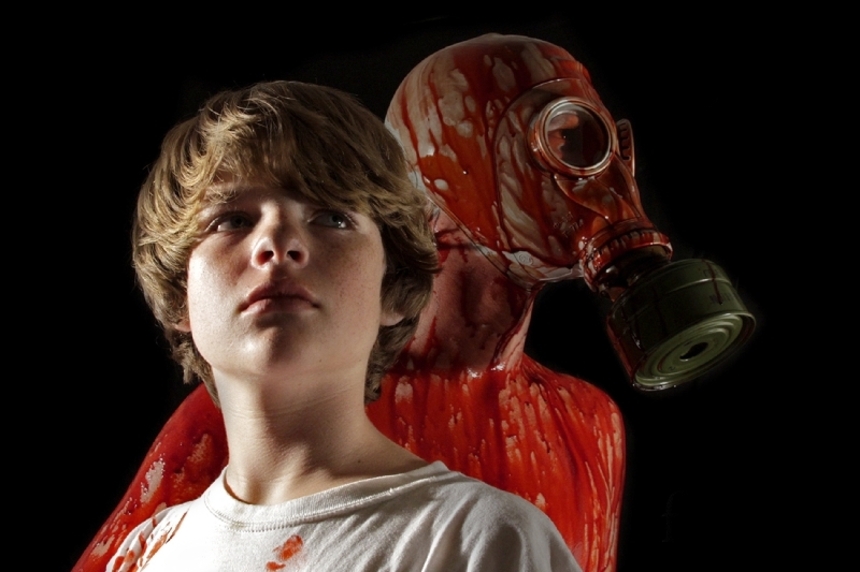 "My brother keeps a human head in his closet." So intones twelve-year old narrator Marty at the beginning of Found, a pulpy, twisted coming-of-age thriller which, by the end, subjects poor kid to such ridiculous perversion and violence that the severed head seems kinda cute in comparison.

Produced on a budget that's probably even too low to be called shoe-string, Found is one part earnest coming-of-age melodrama, one part blood-soaked video-nasty. While director Scott Shcirmer's (adapting a novel by Todd Rigney) isn't completely successful navigating this tonal tightrope, there are enough memorable, and even brilliant parts of the uneven whole to make the film well-worth watching. That goes triple for those who grew up watching horror movies in the 80's and 90's.

Now then, let's get back to that severed head. It's one of many rotating heads, which come and go in the bowling ball bag that sits in the closet of Marty's older brother. Marty himself is obsessed with horror movies and violent comics in the same way that most adolescent boys are, and so he reacts to the heads with uncertainty, intrigue and believable ambivalence. He fears his brother, and he, not surprisingly, wishes he wasn't a serial killer. But he also feels a natural bond and respect for the former-role model who likely showed him his first horror movie, and each severed head sparks more curiosity about his brother's secret life and how it developed.

Like most kids in these types of movies, Marty also has to grapple with fickle friendships, harsh school bullying and clueless, desperate parents. But, rather than the disaffected cynicism of films like Excision, Schirmer approaches the film's harsh material with observant sensitivity. By portraying Marty as a real, confused boy, Schirmer avoids simplistic moralizing and cheap shots at Suburbia with which most films of this type preoccupy themselves.

There's also a genuine affection for the 90's suburban milieu, and the scenes that don't involve severed heads and insane violence male adolescence in the 90's with expertise and grace. So, those who remember when trips to the video store in preparation for horror-marathon sleepovers were as important as meals will come away with a totally earned sense of nostalgia. In the film's coup-de-grace, Marty and his friend watch a spectacularly depraved film-within-the-film called Headless, which perfectly captures the ambivalent, confused moment when a child who thought he had seen everything finally sees a movie that disturbs him on a deep level. And naturally, there's a friend sitting right next to him, ready to call him a pussy when the thing's over.

Carrying the bulk of the film's weight on his shoulders in young actor Gavin Brown, and he gives perhaps one of the best young debuts I've ever seen. He is  curious, observant and mature, but also confused, frustrated and emotionally volatile. It's a lot of emotional baggage to balance, especially in a movie that aims to stay grounded in spite of its over the top premise, but Brown completely sells it all.

Unfortunately, most of the other acting looks even worse and more stiff in comparison with his performance. The parents especially deliver lines with a rehearsed, unnatural syntax, and while Ethan Philbeck has a few genuinely creepy/funny moments as Marty's older brother, he too seems to be forcing his part too much.

The film only loses footing during it's last act, where Schirmer serves up violent, Jack Ketchum-style depravity in spades. Unfortunately, the over-the-top violence and perversion, as well as some of the narrative jumps that lead to it, are abrupt, and only barely plausible based on what came before. The result is a climax which, while certainly graphic enough to earn an NC-17 rating, comes off as laughable rather than shocking, as if it's trying too hard to get a rise out of the audience. There's also a tossed-off racial motif in the movie that's barely developed, and as a result, feels more tasteless and desperate than really provocative.

The film's aesthetic is also uneven, perhaps because of its low budget. The problem isn't the budget per say, but rather that Schirmer and his team try so hard to make it look like it cost more than it did. Some of these attempts work, but others simply draw attention to the production money the film didn't have. I would have preferred that Schirmer found an aesthetic that embraced its low budget, rather than tried to compensate for it, especially given the film's VHS video-nasty connection.

All that said, it's refreshing to see an independent film that takes so many storytelling risks, and especially one that actually manages to succeed admirably in the vast majority of them. In the end, the parts the film gets right linger longer than those it doesn't, making Found a compelling, unique and, yes, totally sick portrait of a serial killer.

Do you feel this content is inappropriate or infringes upon your rights? Click here to report it, or see our DMCA policy.
BIFFFBrussels International Fantastic FestivalFoundScott Schirmer