SXSW 2013 Review: REWIND THIS! Is About More Than Just Tapes, It's About Love 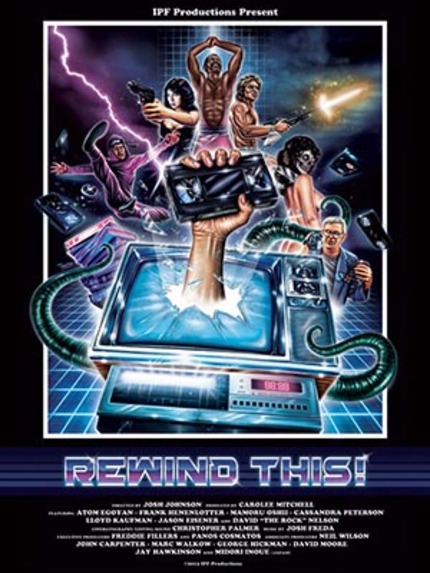 One could be forgiven for imagining director Josh Johnson's documentary debut, Rewind This!, to be a look inside the tiny niche of the current VHS collecting boom. Many of the promotional materials are a bit misleading in that way. However, this documentary paints with a much broader brush, digging through nearly forty years of ephemera and home video history to uncover the true impact of home video tape, and specifically VHS, on the world of movie fans, movie studios, and everyone in between on the supply chain. In all honesty, there is probably enough content within Rewind This! for three or four feature length documentaries, but Johnson and his tiny team of producer Carolee Mitchell and director of photography/editor Christopher Palmer, have managed to distill the experience down to its most potent ingredients and leave the audience with a highly satisfying straight shot of movie love.

Rewind This! is a documentary that movie nerds worldwide have been waiting for, one that embraces everything from trash to treasure and makes no value judgments between the two. In his editorial for Wired online, former Alamo Drafthouse programmer Zack Carlson deconstructed the concept of the "so bad it's good" film by saying this, "If a movie entertains us, then it's good". This is the glory of the VHS boom, as explored in Rewind This!, the beautiful part is that home video made so much available to so many people with relatively little effort. Access is key in this game, and never before were more films available than after the advent of VHS home video. The good, the bad, and the AMAZING were all just a short trip to the local Mom-n-Pop video store away.

Only part of the story of VHS is the story of the films and fans, the other part is the greater impact that this first introduction to instant gratification had on popular culture in general. For the first time consumers were no longer at the mercy of their local theater or television station, the power to discover cinema was in their hands. Creative anecdotes from Hobo With a Shotgun's Jason Eisener and others explained how home video became their film school. It was also a new way for culture to propagate and became a source of culture unto itself, inspiring thousands of people to take up camcorders and create their own art for fun and profit.

In support of his thesis, Johnson has wrangled a ton of the pioneers of the format as well as present day aficionados and some of the beneficiaries of the home video explosion. Without a doubt the most entertaining of the interviews belongs to Frank Henenlotter, who is magic on camera and always has been. As a filmmaker who milked the VHS collector market well past its expiration date as a part of the Something Weird Video team, along with SWV head honcho Mike Vraney, Henenlotter is one of many interviewees who were there at both the beginning and end of the road for VHS, and he has a special fondness for the format. While some of the contemporary interviewees might have an affection for VHS that borders on obsessive kitsch, Henenlotter's infectious enthusiasm and bold practicality makes the best argument for preservation. Even though his interview segments are spread throughout the film, they are the standout segments, and seem to hit on many common themes regarding the introduction and longevity of the format.

Rewind This! explores not only the art of shot on video potboilers, but also the economy that sprung up out of this completely new revenue stream desperate for content. Interviews with David "The Rock" Nelson have convinced me that if that man didn't have a camcorder to make his homespun monster movies, that he'd probably be in prison for sautéing someone's labia majora, or more likely in an asylum. Again, Henenlotter turns up to explain the kind of desperation that birthed minor video empires like Charles Band's Empire Pictures and others.

VHS was the first great equalizer for films. Films all took up an equal amount of shelf space, they weren't fighting to get the biggest billboards or marquees to grab attention. All it took was a great cover and a misleading promise of insanity within to get people like a pre-pubescent Mr. Hurtado to grab something like Psychos in Love or The Return of the Living Dead off the shelf and make him beg and plead with his parents to let him take it home for the weekend. Several of the interviewees mention this, and Cassandra Peterson (Elvira) even tells how she browses through video store shelves "facing" all of her product for maximum impact on potential customers. These people are showmen, and VHS taught them the rules of the game.

With a cast of dozens of interviewees, both fans and experts, Rewind This! is as comprehensive a look at the home video revolution as can be fit into 90 minutes. While many, including our own spoilsport founder, Todd Brown, keep insisting that physical media is all but dead, many of us keep the flame alive. VHS bred the collector mentality into us, I had as many as 400 VHS tapes before I made the move to DVD and Blu-ray (of which I know have over 4,000), and it was all about finding that hidden gem that no one else had heard of. Even better, sometimes it was about exposing that gem that we remember vaguely from childhood to a larger audience, which is largely my goal in my home video reviews for ScreenAnarchy. Johnson and company have true affection for movies, not just VHS, but movies as a whole and that's something with which even the most casual ScreenAnarchy reader can identify. I defy our readers to see this film and somehow manage to staunch the steady flow of fond childhood memories  from pushing tears from their eyes. Rewind This! is a fantastic document for the world, I only hope that there's more where this came from!

Do you feel this content is inappropriate or infringes upon your rights? Click here to report it, or see our DMCA policy.
Josh JohnsonBen JousanDavid GregoryMicah MatthewsMike VraneyDocumentary

More about Rewind This!