SXSW 2013 Review: HOURS Makes the Mistake of Putting All Its Dramatic Weight on Paul Walker's Shoulders 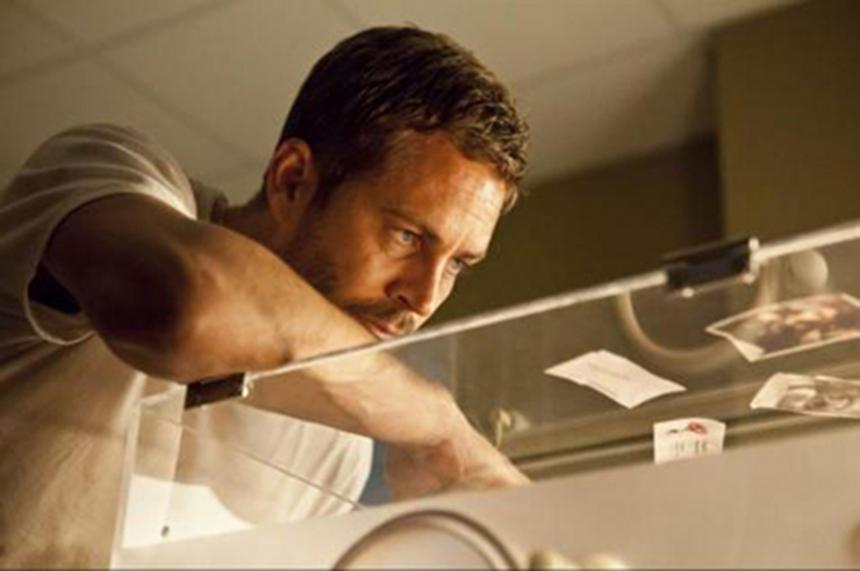 All human beings have a talent for one thing or another, and Paul Walker is a human being, so Paul Walker undoubtedly is good at something. But whatever it is, it's not acting. Acting is not the thing Paul Walker is good at. He's harmless enough in the Fast and the Furious movies, where little acting is required and where he has equally blank-faced scene partners (Vin Diesel, cars, etc.) to offset him, but it would be a bad idea to put him in, say, an emotional drama that's essentially a one-man show.

Yet that's exactly what has been done with Hours, a dimwitted, unintentionally funny melodrama starring Walker as a man stuck in an abandoned hospital during Hurricane Katrina with no one to talk to but himself, his ventilator-reliant newborn infant, and a rescue dog. Oh, and the ventilator itself. He talks to it sometimes, too. The power is out, and the ventilator's backup battery only holds a charge for a few minutes at a time before he has to hand-crank the generator again. "You're playing dirty, Mr. Machine!" he hollers at the machine.

Anyway, the point is, Walker is the only person in the movie most of the time, and it's as bad as it sounds like it would be.

Walker's character, Nolan Hayes, arrives at the hospital with his wife, Abigail (Genesis Rodriguez), just as Katrina is hitting New Orleans. Abigail isn't due for another five weeks, but she's in labor now, delivering a frail but resilient baby girl and dying in the attempt. Nolan is devastated. Nearly as devastating: the endless, cringe-worthy scenes of Walker moving through the stages of grief like a first-year acting student trying to impress his professor.

Though he'd planned to name the baby Hailey, Nolan decides now to name her Abigail, in memory of her mother. Glossed over is the fact that until now, he was going to name his daughter Hailey Hayes, which would have made her fit only for a career as a superhero's girlfriend.

The hospital is evacuated when the electricity goes out, but baby Abigail's ventilator is too heavy to permit transport, and its battery, as mentioned, is almost useless. Nolan has to stay nearby and crank the generator every three minutes. In between, he dashes out to look for possible rescue or assistance strategies, dashing back when his three minutes are up to recharge the battery. One of the film's paradoxes is that even though he knows he only has three minutes, he rarely seems to be in much of a hurry, walking briskly (sometimes even dawdlingly) when a sprint would be more efficient. Look, Paul Walker, if YOU'RE not convinced that your situation is desperate, why should I be?

That is the problem in a nutshell: Walker is not convincing. Not as a grieving husband, not as a frantic father, not as an exhausted man deprived of food and sleep for 48 hours. Flashbacks to his life with Abigail demonstrate that he wasn't convincing when times were happier, either. There's a scene where he runs -- really runs -- up five flights of stairs to the roof to try to get a helicopter's attention, and is then so depleted he has to stop and catch his breath before he can hurry back to recharge the ventilator. Stopping means his baby could die, but he is physically unable to continue. Yet watching him, you think: You don't look that tired. You're barely sweating, hardly even breathing hard. You're not doubled over, collapsed with exhaustion.

In other words, Paul Walker is so bad at acting that he cannot convey "tiredness" in a character who just ran up five flights of stairs.

It's not all running up stairs and screaming at ventilators, though. There are also quiet moments when Nolan sits and talks to his baby. He goes through the artifacts in his wallet, pulling out something that reminds him of his grandfather. "Now there's someone I would have liked you to meet," he muses. "You two are quite alike, really." UGH.

This dialogue was written by Eric Heisserer, who worked on the screenplays for Final Destination 5 and the remakes of A Nightmare on Elm Street and The Thing. Now he's directing for the first time. It's possible that his lackluster script, with its go-nowhere plotting and surface-level emotions, could have been rendered watchable by a talented and charismatic actor. But with Walker, it never stood a chance. He's just not up to the challenge of carrying every scene by himself for an entire movie.