Review: 21 AND OVER Makes Binge Drinking A Laughing Matter 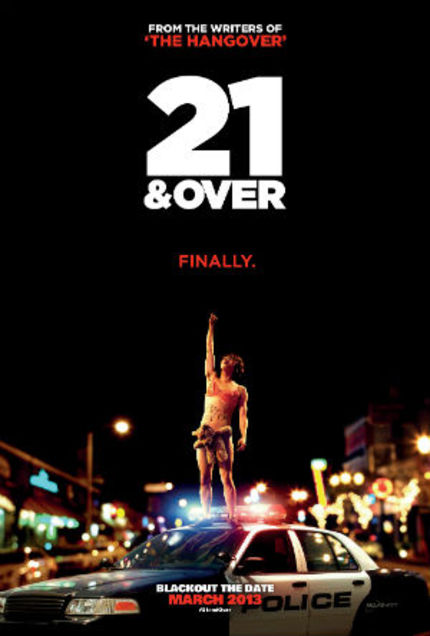 Since I didn't go to college and didn't get drunk in my early 20s, some movies are less fathomable to me than others. Case in point: 21 & Over, a mixed-message spiritual cousin to The Hangover, whose writers make their directorial debut with a drunken comedy that's more sober, less humorous, and more offensive than (likely) intended.

The gross-out part of the equation is filled early with public urination -- on squealing girls in a bar, no less -- and slow-motion projectile vomiting. These moments and others that pop up thereafter feel obligatory, however. (Not the male nudity, though; all three of the fit lead actors are lovingly displayed at various times in the nearly altogether.) Directors Jon Lucas and Scott Moore, working from their own screenplay, manifest a much greater desire to develop a feel-good character piece about a trio of high school friends who have gone their separate ways, only to reunite so as to celebrate the 21st birthday of their highest-achieving member. (21 being the magic age in the U.S. when drinking alcoholic beverages is legal.)

Or so it would appear. Jeff Chang (Justin Chon), whose family and personal names are always spoken together, as though "Jeff Chang" were a sacred mantra chanted to ward off evil spirits, is vastly more troubled than he has led his visiting friends, the party-hearty Miller (Miles Teller) and the business-first Altman (Skylar Astin), to believe. His stern father (Francois Chau) expects his son to follow him into the medical profession, and instructs him to rest and be ready for an early-morning interview for entrance to medical school. Miller insists that Jeff join his friends in a night of drunken revelry, and it takes only one smash cut before Jeff is drunk out of his mind and, soon thereafter, passed out.

Alas, his friends are strangers to the university town, and have no idea where Jeff lives, so they must spend the night trying to get their friend home in time for the interview first thing in the morning, while drinking copious amounts of alcohol (with no ill effect) and enjoying the party to end all parties that is raging throughout the community. Along the way, Miller falls for a comely coed named Nicole (Sarah Wright) and Altman fights with Nicole's boyfriend Randy (Jonathan Keltz) and Randy's dim-witted, sexually-confused buddies.

Lucas and Moore, having tasted success with The Hangover, follow a similar formula, adding a few licks from Weekend at Bernie's, but the brew is more noxious here, in part because the young protagonists must appear to pay a moral price for their escapades. They are not penalized for their binge drinking, which is shrugged off as a youthful indiscretion with no lasting consequences, but for losing touch with one another, which is presented as a much greater sin, as though the only companions in life who can be trusted are the ones made in youth.

This is patently ridiculous, an idea that is touched on in the initial flirtatious conversation between Altman and Nicole, when she suggests that 'our oldest friends are the weirdest,' and Altman comes to the defense of his friend Miller: 'No, he's always been that weird.' The mixed message of 21 and Over is that we never grow up, that we remain slaves to our past, that we must honor and maintain close relationships only with those we have known the longest. Unless, of course, a pretty girl comes along, or a father's conduct becomes too restrictive. Then it's perfectly all right to change and shake off the shackles of the past, as long as your best buddies are kept close.

And what sort of buddies are these, anyway? The characters are drawn as baldly as possible from racial and religious stereotypes, so (naturally) the Jewish guy is sexually uptight and more interested in his career than fun, the Chinese guy is casually and extensively insulted on behalf of all Asians -- so is his father, for that matter -- and the African-American guy is ... oh, wait, the movie's (evidently) set in the Pacific Northwest, where only Caucasians and two Asians attend school, so there is no African-American guy to insult or race-bait.

But it's all in the name of almighty fun, right? 21 and Over positions itself as a coming-of-age comedy that's not meant to be taken seriously, which is a flimsy excuse for its borderline-offensive racial and sexual jokes. Yet its insistence on inflating its running time with questionable humor and dramatic overtones that borrow from harsh collegiate realities (binge drinking, possession of a handgun, attempted suicide, depression) and then tossing those aside in the most shallow manner possible leaves a sour taste.

21 and Over opens in theaters wide across North America on Friday, March 1, 2013.

(See also: China Beat: Retooling Hollywood for the Mainland by James Marsh, ScreenAnarchy's Asian Editor, in which he discusses how the film will be changed for its release in China.)

Do you feel this content is inappropriate or infringes upon your rights? Click here to report it, or see our DMCA policy.
Jon LucasJustin ChonMiles TellerScott MooreSkylar AstinThe Hangover