TIFF Next Wave Review: Droids, Dreams and Destiny Come Together In 5-25-77 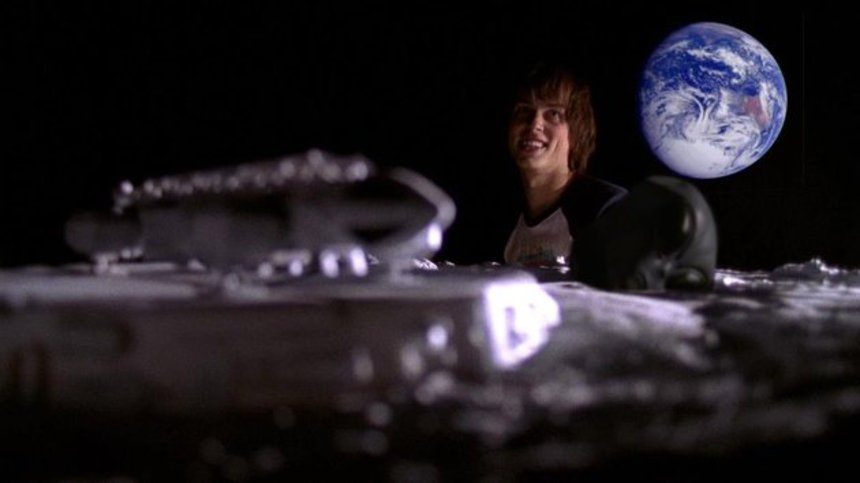 Whether you were one of the first to see it back in '77, or whether you were born well after the pop-culture bomb built by the man named George Lucas blew sky high, chances are Star Wars has impacted your life one way or another. Pretty much every movie fan has a story about the first time they saw the uber-classic space opera, but no one, and I mean no one, has a story like writer/director Patrick Read Johnson (Spaced Invaders, Dragonheart, Baby's Day Out), as recounted in his new film 5-25-77 (which is the date SW was released for anyone who doesn't know).

Pat (Freaks And Geeks' John Francis Daley) is a 70s-era small town teen, who makes films in his backyard with his family and friends, and is obsessed with all things sci-fi after having seen Kubrick's 2001: A Space Odyssey when just 8-years old. With dreams of one day meeting his hero Douglas Trumbull, young Pat has resigned himself to shooting projects like a swimming pool version of Jaws 2, or a low-rent epic continuing the plight of Moonbase Alpha in Space: 2000 on a table in his bedroom and starring his little brother. Until his resourceful mother, Janet (Collen Camp, D.A.R.Y.L., Track 29) cold calls American Cinematographer editor Herb Lightman (played by the amazing Austin Pendleton, What's Up Doc?, Catch-22), who agrees to meet young Pat and show him around L.A. for the weekend.
And what a weekend it is. Pat finds himself hanging out with another one of his heroes, Steven Spielberg, and witnessing the creation of an FX sequence from Close Encounters Of The Third Kind, as well as briefly meeting his idol Trumbull. The weekend culminates in a fate-making trip to an upstart Industrial Light And Magic.

Lightman invites Pat along to check out a "sci-fi flick these kids in the valley are making", which of course turns out to be Star Wars. When Lightman can't get 8x10s from the FX guy, John Dykstra (duh!), the future visual magic guru, invites the two to check out some footage. The trio ends up watching an entire workprint of the soon-to-be megahit space opera classic, which profoundly changes young Pat. On returning to his tiny town of factory workers and jocks, no one believes Pat that a culture-changing storm is coming over the horizon with a blazing lightsaber in its hand. His best friend doesn't believe him, and his understanding girlfriend thinks it's all a little goofy, but Pat knows who will be laughing last when those fateful words, "A long time ago...in a galaxy far, far away" appear on screen.

While hitting all the cinematic meta marks for old school movie geeks like me, 5-25-77 has a higher purpose then just lovingly tickling the romantic memories of a youth who saw these classics in theaters. It's an ode to being a dreamer, following those dreams, and continuing on a noble path laid down by a generation of other dreamers before them. It's about finding your place in a world that may not seem to understand you at first, and the value of family, friends, and believing in yourself.

Now that may all sound a little saccharine, but it's really not. 5-25-77 is a coming-of-age flick, but think of the work of Joe Dante or Judd Apatow. It's sweet without being condescending, or assuming young people don't have fully fleshed-out lives or the capacity to think at a higher level. This is the anti-stoner teen comedy, and doesn't rely on kitsch and romanticizing the past to sell itself. The cool throwbacks are merely a framework to tell a larger, and ultimately more important story of growing up, and having the bravery and self-confidence to go make your dreams come true.

Also, to be clear, the copy of 5-25-77 I saw was a work in progress, but the film itself is a small miracle that the real Patrick Reed Johnson has been working on for the past few years. Finally nearing completion, only missing some minor FX and music to replace some of the songs that appear in the film, this baby is ready for flight. It's a great reminder of why we all love movies in the first place, as well as being an inspirational tale about following your own tune. Cool too is the fact that the TIFF Next Wave programming is curated by teenagers, so the films playing actually resonate with their intended audience, as well as old romantic geezers like yours truly.

But yeah Star Wars geeks, y'all have something very special and cool coming down the proverbial trench in the near future. Keep your Jedi senses sharp because this one is going to make you roar like a Wookie with pleasure. Look out for an interview with 5-25-77 filmmaker Patrick Reed Johnson coming soon to Twitch/The Night Crew podcast as well! Also, look for more reviews from the TIFF Next Wave program over the next few days.

Until then...May the force be with you!