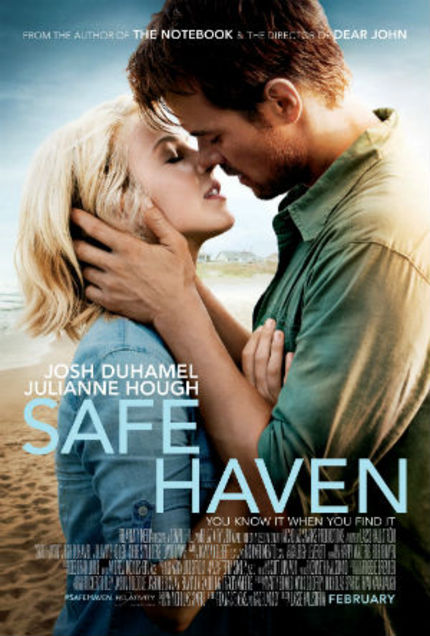 Oh, sure, it's popular to make fun of Nicholas Sparks movies. It's very "cool" and "trendy" to pile on the insults every time a new one is released, three or four times a year. But do you want to know the real reason why they're held up to such ridicule?

Because they're bad, that's why. What did you think?

They do range in quality, but even the best of them, like The Notebook and Nights in Rodanthe, are only mediocre. At the other end of the spectrum is Safe Haven, a wholly inert lump of by-the-numbers syrup that's as boring as it is pointless. A person who has never read any of Sparks' novels (like me) is left to assume that he deals only in directionless stories, random tear-jerking illnesses, and vaguely defined characters. If it is possible to turn a Sparks book into a terrific movie, nobody has done it yet.

Safe Haven is the vapid story of a bland young woman named Katie (Julianne Hough) who flees her home in Boston and drifts into the benign seaside town of Southport, North Carolina, which is populated by forgettable quaint types. With goodness-knows-what money or credit (she's using a fake name), she buys a rustic fixer-upper outside of town and tries to avoid all human contact. But the fella who runs the general store, Alex (Josh Duhamel), a dully handsome young widower with two children, takes a shine to her. Will a romance develop? Will it blossom and bloom? Will there be heartache and sorrow? Since it's a Nicholas Sparks story, which one of them will die?

Ah, he pulled a fast one on us there. The tragic death occurred before the movie even started, in the person of Alex's wife. Very tricky, Sparks! Alex's son, Josh (Noah Lomax), bitterly opposes any new romance for his dad -- right up until the point, late in the film, when he suddenly and without cause gets over it. Josh's little sister, an adorable puddin' named Lexie (Mimi Kirkland), barely remembers Mom, so she's cool with it from the beginning.

After initially rejecting all friendly advances from Alex or anyone else, Katie gradually warms up to the idea of being a normal human being who functions in society. In this she needs assistance from a neighbor lady, Jo (Cobie Smulders), who has to remind her that it's OK when people do nice things for her. But trouble is brewing! A shady Boston cop (David Lyons), who of course is a heavy drinker (stack up those cliches, Sparks!), is on Katie's trail in connection with whatever the incident was that caused her to hightail it.

That angle is the lone bit of mild intrigue in a story that otherwise moseys along aimlessly. Maybe it would be different if Hough and Duhamel had any chemistry together. Maybe they'd have some chemistry together if there weren't a 16-year age difference between them. Maybe it would help if they had a screenplay that gave them anything to do or say beyond the usual trite nonsense. This one, by Leslie Bohem (Dante's Peak) and Dana Stevens (City of Angels), regurgitates the standard formula with a breathtaking lack of passion. When Alex inevitably learns that Katie has misled him about something, he is heartbroken, rejects her, won't even let her explain. About 90 seconds later, still without letting her explain, he gets over it, just as cursorily as he got upset in the first place. It's like we're hastily collecting plot points in a scavenger hunt.

There's also the matter of Jo, the neighbor lady. She doesn't serve any purpose in the story. None at all. You could remove her entirely without doing any harm. In fact, given what eventually becomes of the character (ugh, I won't spoil it for you, but it's stupid), the movie would be improved by her absence.

Lasse Hallstrom is the director. He earned Oscar nominations for My Life As a Dog and The Cider House Rules, and also directed What's Eating Gilbert Grape, Chocolat, and The Shipping News. This is the second Sparks movie he's made, after 2010's Dear John. There's no way this line of thought can end happily, so I'll stop now.

Like most of its Sparksian siblings, Safe Haven isn't claw-your-eyes-out terrible. It's just ... there, a big ol' pile of derivative fluff with nothing to recommend it. Honestly, if you're looking for a Valentine's Day movie, Amour would probably make you happier.

Do you feel this content is inappropriate or infringes upon your rights? Click here to report it, or see our DMCA policy.
Josh DuhamelJulianne HoughLasse HallstromNicholas Sparks