Review: THE MAN WITH THE IRON FISTS Goes Direct to "Meh" 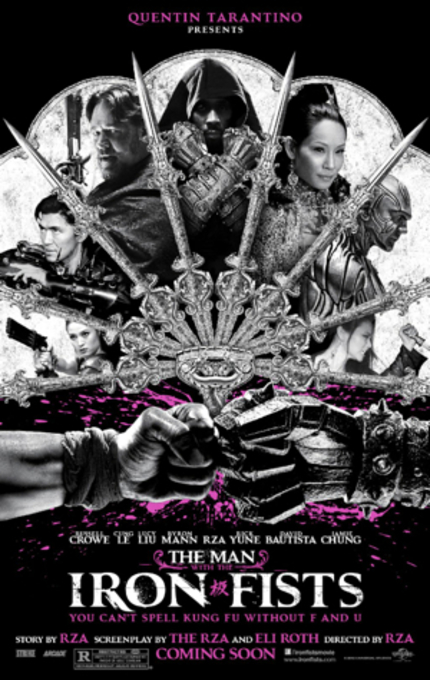 An awkward love letter to martial arts movies, The Man With the Iron Fists fills its running time with nearly every genre staple imaginable: spurting blood, severed limbs, poison darts, flying children, Buddhist training, bathing prostitutes, invincible villains covered in CGI armor, dialogue that sounds like it was translated badly from English into Chinese and then back into English by someone who speaks neither language and then dubbed into English by a non-native speaker. Oh, and Pam Grier.

Obviously, The RZA has a deep, wide knowledge of martial arts cinema -- for further proof, check out the excellent DVD audio commentary he did with Andy Klein for The 36th Chamber of Shaolin -- and, in making his directorial debut, he appears to have been intent on showcasing that knowledge with (what I'm sure he thought would be) a fabulous mixtape of moments inspired by the Shaw Brothers films and other classics of Hong Kong cinema. His knowledge, however, does not translate well into action on the silver screen.

The Man With the Iron Fists occasionally displays flashes of inspiration, most notably in a relatively brief sequence late in the film featuring Lucy Liu and her house of deadly, silken hookers, but it's too often merely a baffling oddity: not good enough to praise, not bad enough to dismiss entirely, and certainly not sufficiently fun-filled to enjoy for adherents of the "so bad it's good" school of thought. It falls into the middle ground as a "direct to meh" * movie.

Structurally, the story is a mess. The RZA provides the opening narration, in a soft-spoken voice that's nearly unintelligible. He plays a blacksmith in Jungle Village in late 19th Century China; he's in love with local prostitute Lady Silk (Jamie Chung) and kept busy making weapons for various feuding clans. But for the first part of the movie, the blacksmith is a bit player, and the absence of an apparent protagonist leaves the narrative rudderless.

In any event, a crisis is precipitated after the murder of Gold Lion, the head of the Lion Clan; his evil son Silver Lion (Byron Mann) assumes command after dispatching his brothers and declares war upon other clans, including the Wolf Clan and other clans named after animals. In the midst of the turmoil, a lone British soldier of fortune arrives at the brothel run by Madam Blossom (Lucy Liu). When he is challenged for the hand of a young hooker, the soldier rips open the abdomen of his fat challenger in the middle of the crowded brothel, and introduces himself to the stunned crowd: "My name is Mr. Knife! But you can call me Jack!"

Played by none other than Russell Crowe, Jack Knife would seem to be the movie's hero, but, no, he is too busy sexing up multiple whores and emptying bottles of alcohol to bother with any such boring subjects as plot mechanics. Well, then, what about Zen Yi, the X-Blade (Rick Yune)? He seems like a heroic type, always all serious and stolid and devoted to his lady love, but he's barely on screen for long stretches, and when he does show up, we're not exactly sure why, or what his purpose is for existing in this particular movie.

Eventually, the movie warms up to the idea of the blacksmith as the protagonist, and finally gets some forward momentum: once he gets his iron fists, we're positive he's the only one who can take on the fearsome Brass Body (Dave Bautista), the aforementioned invincible villain with CGI armor. Alas, the action sequences, even with choregraphy credited to the often masterful Corey Yuen, are so chopped up and confusing to watch that there's no joy in the bloodshed, which often appears to have been inserted from another, alternate universe.

Madam Blossom's brothel looks much like the House of Blue Leaves set from Quentin Tarantino's Kill Bill, which reinforces the idea that Tarantino (who serves as executive producer) influenced The Man With the Iron Fists as much as the Shaw Brothers, Hong Kong cinema in general, and co-writer Eli Roth. Indeed, the movie feels like the string of Reservoir Dogs / Pulp Fiction tough-talkin' crime flicks that followed in the wake of Tarantino's twin success stories in the 90s -- only with martial arts.

Tarantino has certainly borrowed heavily from a multitude of genre films, but he's also managed to fuse his inspirations with his own distinctive (if imitative) worldview, something that The RZA has yet to do. The Man With the Iron Fists doesn't have enough of its own personality to warrant much more than a passing glance.

* From Urban Dictionary: "Meh: Indifference; to be used when one simply does not care."

The Man With the Iron Fists opened wide in North American theaters on Friday, November 2.

The Man with the Iron Fists