Review: RISE OF THE GUARDIANS Tries to Make Jack Frost a Thing 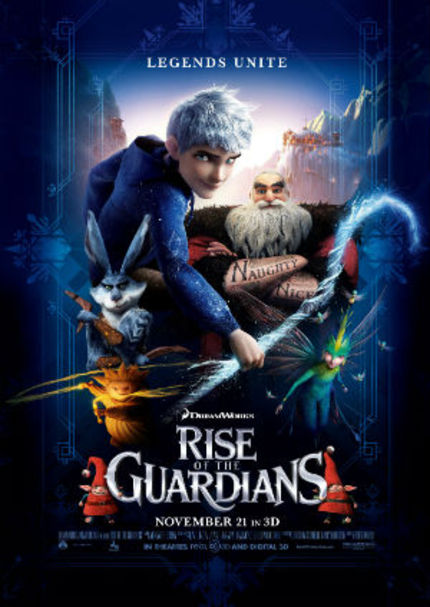 A story in which mythical figures like Santa Claus, the Easter Bunny, and the Tooth Fairy team up to protect children from the Boogeyman sounds like a sure bet, and William Joyce's Guardians of Childhood book series has evidently found plenty of material in that concept. But the movie version, going by the franchise-launching title Rise of the Guardians, runs out of steam with shocking speed. Energetic animation and a handful of amusing character touches help, but they can't compensate for the paper-thin story and muddled messages.

There are four official Guardians, called and ordained by the Man in the Moon (who is in charge for some reason) to watch over the children of the world. They are Nicholas St. North (voice of Alec Baldwin), aka Santa, a sturdy Russian with "naughty" and "nice" tattooed on his forearms; the Easter Bunny (Hugh Jackman), cantankerous and Australian; the Tooth Fairy (Isla Fisher), whose work is assisted by thousands of hummingbird-like minion fairies; and the silent, enigmatic Sandman.

Perhaps you have already identified a problem. Young children believe that Santa Claus, the Easter Bunny, and the Tooth Fairy are real. Nobody thinks of the Sandman that way. I'm not sure kids are even familiar with the concept of "the Sandman." The only time most adults ever mention him is in the context of a 1950s pop song or a 1990s metal song. You've really got a maximum of three persons eligible for inclusion in this Superfriends squad, and they pertain to Christmas, Easter, and dental care. Anything beyond that is a stretch.

That includes the proposed fifth member of the Guardians, Jack Frost (Chris Pine), a skinny emo teenager with a carefree existence centered around freezing lakes and making icicles. He thinks all the kids should love him because he gives them snow days, but the sad truth is that kids don't believe in Jack Frost. When their parents tell them to "look out for Jack Frost," they scoff. Santa, the Easter Bunny, and the Tooth Fairy (and, according to this movie, the Sandman), sure. We buy that. Jack Frost? No. Quit trying to make Jack Frost a "thing."

Nonetheless, the Man in the Moon has Jack join the Guardians to help fight the return of Pitch Black, aka the Boogeyman (Jude Law), who turns children's dreams into nightmares and may pose some other, greater threat, too, though the movie is fuzzy on details. The big danger seems to be that children will stop Believing In Things, and that this lack of faith will cause our magical friends to lose their powers. But nobody believes in Jack Frost -- that's his major complaint, you'll recall -- and he does OK. Also, the kids in the movie believe in the others without having any direct evidence of their existence, but refuse to believe in Jack until they see him with their own eyes. So which is it -- you gotta have faith, or seeing is believing?

This isn't nit-picking. It's the whole basis of the movie. Aside from Jack's desire to learn his purpose in life, no one in the movie has a relatable goal, dream, or desire. We know we're rooting for the good guys because, well, they're the good guys. But without clear stakes or identifiable motivations, the story is flat.

Which isn't to say it's unenjoyable. There are fun variations on the familiar mythologies (Santa's elves are incompetent, so the real work is done by Yeti), and the movie plays with the characters' knowledge of one another: the Easter Bunny is resentful over the Easter egg hunts Jack Frost has ruined; the Tooth Fairy's minions swoon over him like a rock star. This collection of folkloric personalities, with their different approaches and styles (the Tooth Fairy works every night, not just once a year!) has great potential as movie fodder, but Rise of the Guardians doesn't tap into it. The stage is set -- now all we need is a show worthy of it.

Rise of the Guardians opens wide across North America on Wednesday, November 21. Check local listings for theaters and showtimes.

Rise of the Guardians