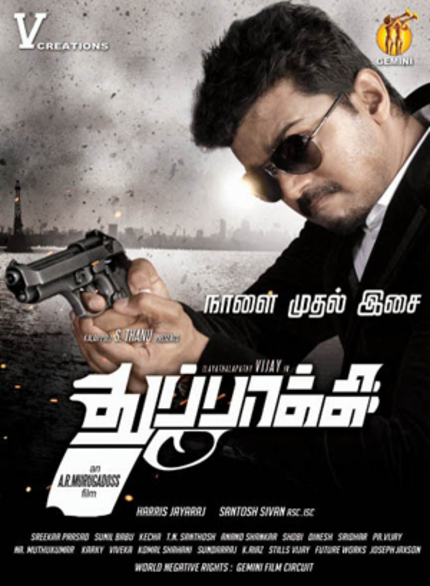 A few weeks ago Tamil film fans were teased with about 30 seconds of footage from director AR Murugadoss's upcoming action thriller Thuppakki and we were all eager to see more. Our wish has been granted with this new theatrical trailer that quadruples the length of the first look teaser without giving us too much more to work with in terms of grasping the tone of the film.

This trailer looks like more of the same, except now we get a little bit of romance thrown in via an appearance from the film's heroine, Kajal Agarwal, who probably has a higher average gross on her projects than anyone in India at the moment. All of this is not terribly exciting unfortunately, however, I'm willing to give it a shot because I know that Murugadoss has good films in him, he just missed the mark last time. Perhaps he just needs to make his focus a little bit more clear in order to get the results he's looking for.

Thuppakki looks like a straight forward masala thriller, which isn't a bad thing. If the film is done properly without too much digression, it could be very fun. However, in order for that to happen Murugadoss needs to avoid the temptation to insert too many left field filmi moments. That was one of the main problems with 2011's 7aam Arivu, the time spent on the will they/won't they romance took away from the potential for real high concept action. As of right now things are still up in the air in this regard. As promising as the trailer looks, Thuppakki has also released a video for the song Google Google, which doesn't do a whole lot to inspire confidence.

Thuppakki opens this November 9th (as of now), which means it will miss the Diwali crush of releases and probably bodes well for its box office results. Unfortunately for them, I could care less about the box office, I just want a good movie!