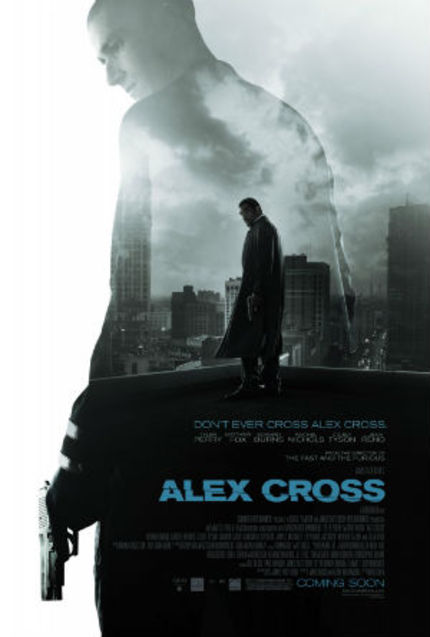 Poor Detroit. Where is RoboCop when you need him? Until the mechanical police officer appears again, you're stuck with Tyler Perry as Detective Dr. Alex Cross, a half-human, half-mechanical law enforcement investigator who's more interested in exacting revenge than in solving crimes or protecting the citizens.

The creation of novelist James Patterson, Cross lived and worked in Washington, D.C. but the character and his family have been moved halfway across the country to Detroit, Michigan, for no apparent dramatic purpose. (I suspect that state tax credits are better in Michigan.) Cross is a highly-intelligent psychologist-turned-police officer who can shoot bad guys with deadly accuracy but prefers to annoy them to death with by-the-book psycho-babble.

At least, that's the technique he tries with a psychotic assassin / nutcase known as Picasso (the highly-mannered and freakishly unstable Matthew Fox), who can break into places with unbreakable security systems on a moment's notice and then escape without anyone realizing that he's disappeared. This blows giant holes in the credibility of Cross and his partner / lifelong best friend Tommy Kane (Edward Burns), but, hey, they're the best detectives in the Detroit Police Department, at least until RoboCop returns in 2014.

For some reason that's not explained in the movie -- though we get a quick glimpse of a newspaper clipping that may hold some clues -- Picasso has a thing against Cross, so after the two have an armed encounter, from which Picasso escapes, Picasso comes after the detective / doctor with a high-powered sniper rifle. (Though if Picasso holds a personal grudge against him, which seems to be the case, why doesn't he torture and and then kill him at close range, as he's done with two other victims up to that point? That would seem to be more satisfying than a long-distance kill shot. But what do I know? As far as I've been told by my multiple personalities, I'm not psychotic.)

Yes, if you're guessing that Alex Cross is the type of movie that makes people start muttering to themselves, you are absolutely correct.

The story makes little sense. Characters come and go at will; for example, we're told that one particular female character may be 'very important' to a certain male character, but when the lady exits the scene -- by which I mean she is horribly tortured before she is murdered dead -- the male character isn't fazed in the slightest. As with other baffling aspects of the film, it may be that explanatory material was dropped from earlier cuts so as to keep the pace from flagging, but it made me question the believability and sincerity of all the characters. 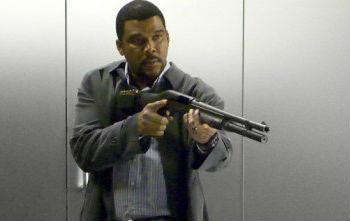 Cohen's strength, then, is making outlandish action pictures with larger-than-life characters, but the action sequences in Alex Cross are utterly routine, featuring a great deal of breaking glass and special effects and CGI work that is honest but reflective of a lower budget. Cohen compensates by cutting the sequences into bits and pieces, the modern technique to heighten tension, add suspense, and disguise the use of stunt doubles, but we're wise to that trick now, and without any memorable moves by Tyler Perry, who proves that Daniel Craig is safe as James Bond for years to come, we're left adrift in a sea of broken glass.

Perhaps because this is not a wall-to-wall action flick, the tone changes constantly, as though it's trying to be all things to all people. It's great that Alex Cross is a multi-faceted personality, a non-stereotypical African-American with a wide range of talents. That works in the novels -- I've read and enjoyed three or four in Patterson's long-running series, though not the one that inspired this movie -- but Tyler Perry doesn't have enough range as an actor to convey effectively all those different tones. He can handle the domestic scenes and the bantering with his partner just fine, yet he sounds rote when he's reciting dialogue as Cross the Psychologist, and incredibly stiff when he's supposed to be meting out justice as Cross the Action Star.

Edward Burns is quite comfortable playing Cross' partner as though he's in a buddy-cop movie, which matches John C. McGinley, who chews scenery as their clueless superior. At home, Carmen Ejogo is a warm, lovely presence as Cross' wife Maria, and Cicely Tyson is feisty in her limited screen time as Nana Mama, Cross' strict, live-in mother. On the criminal side, Fox, with his cartoonish, bug-eyed, hopped-up antics (belying the self-control and steely concentration one would imagine his job requires), would fit better in The Fast and the Furious, while Jean Reno, as a corrupt businessman, acts as though he was handed his script pages as he walked on set.

Alex Cross vigorously resists any effort to categorize it as a simple-minded thriller, but, to quote Shakespeare out of context, I think the movie doth protest too much. If Alex Cross had embraced its more pop-corny aspects, it might be passable as multiplex entertainment, but, as it is, it's as annoying and predictable as Detective Dr. Cross's misguided -- and disastrous -- attempt to psycho-analyze an insane killer with a high-powered rifle.

Alex Cross opens wide across Canada and the U.S. on Friday, October 19.