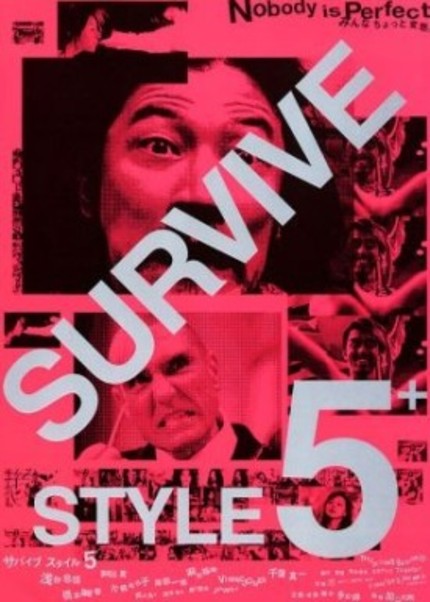 Dear mister Gen Sekiguchi, where the hell did you disappear to? More than 8 years ago you gave us a film that ranks as one of the best Japanese comedies ever produced. Not only that, it's also one of the lushest and vibrant productions to have ever graced a screen. After that ... nothing (apart from a sub par entry in the Quirky Guys And Gals anthology). What a waste of potential, but at least we'll always have Survive Style 5+ to keep us warm.

Sekiguchi comes from an advertising background and it shows. While people like Hiroshi Ishikawa (Tokyo.sora) prefer to mask their commercial occupation, Sekiguchi flaunts it all over the place. Just like one of the characters in this movie Sekiguchi collected a massive amount of left-over ideas while directing ads, all of which he tried to cram in his first feature-length movie. The result is a film that knows little to no creative boundaries, spilling over with cool details and ideas and effectively warranting its 120 minute running time.

Survive Style 5+ is a collection of five separate stories that somehow intertwine along the road. These stories do not lead up to the usual major climax (where all the different arcs would come together), instead the characters from different stories just cross each other's paths during the course of the film. None of these individual stories make much sense, combined they make even less sense, but as a whole they do work together in some strange and almost inexplicable way.

The main arc (or at least the most popular one) is about a man that wants to kill his spouse. Even though he is quite successful, she keeps returning to their home whenever he buries her. Other arcs include the story of an ad director, a successful hypnotizing session turning a man into a bird (permanently), a serial killer asking people about their purpose in life and the adventures of a couple of gay thieves. Like I said before, making sense is clearly not the film's first priority.

Visually speaking Survive Style 5+ is one of the most colorful and detailed films I've ever seen. It is somewhat reminiscent of Wes Anderson's latest projects, though Sekiguchi takes things a lot further. From furniture to clothing and lighting, everything is tailored to perfection. Even the color of the drinks are made to match or contrast with the background. Camera work, lighting and editing are of extremely high quality too, add to that some genuinely creative and well-executed special effects (like the animated horse on a painting that whizzes by) and you have two hours of pure visual splendor.

The soundtrack consists of a selection of tracks I wouldn't give a second listen outside the context of this film, but Sekiguchi incorporates them perfectly well. The music is funny, upbeat and tap-worthy, quite effectively enhancing the light-hearted atmosphere of the film. The "gay" tune and the "headbanging" track are two great examples of how to use music as a defining factor rather than a supporting factor in your film.

The cast too is absolutely stellar. Tadanobu Asano appears in one his best roles to date, flanked by Reika Hashimoto (also his real-life wife). They are assisted by the likes of Hiroshi Abe, Ittoku Kishibe (believe me, it will take a while before you can see him in another film), YosiYosi Arakawa, Sonny Chiba and even Vinnie Jones. But stealing the show is Yoshiyuki Morishita in one of his biggest and boldest parts so far. Casting him as a gay dude is just impossible but Sekiguchi went ahead and did just that. The effect is borderline creepy but also immensely funny.

Survive Style 5+ is a wacky film and for some it may be a little bit too random at times. But even then there is always something that catches the eye. Be it a visual gag, a wonderfully realized setting or a funny idea. The film never drags and the finale is simply perfect, however weird it may be. It's a comedy that works on many levels and most surprisingly even on an artistic level, no matter how goofy some parts may be.

What Sekiguchi realized with Survive Style 5+ is extraordinary. Even though the film lasts 120 minutes it is packed to the brim with little bits of pure genius. A normal director would've spread the material at hand across two or maybe even three films, but Sekiguchi crams everything in one film and manages to keep a good balance throughout. It's a film that gets better with each successive viewing and it ranks as one of my favorites comedies ever.