TITANIC: Thar she blows again, this time in 3D (but see it anyway) 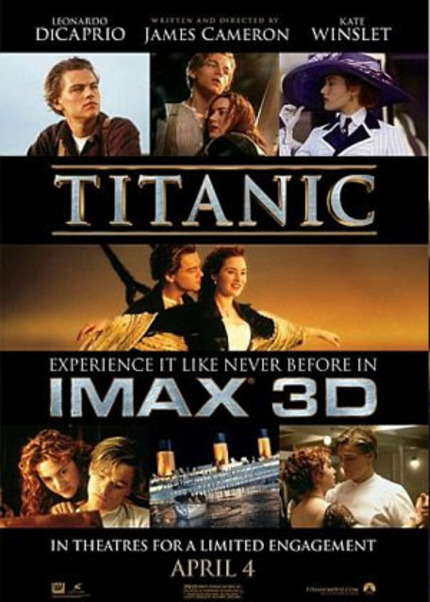 It may be hard for some to remember, but fifteen years ago James Cameron's boat project was feared to be a financial disaster. Talks of cost overruns, of flagrant spending that resulted in the financial commitment of two major studios. There were rumours of tens of millions wasted in the new tank constructed in Baja for the film's main set piece, to a smaller fortune spent during post on seemingly petting things like steam coming from the actors breath in outdoor scenes.

So, when Titanic hit, and an entire generation of adolescent girls went again...and again, driving the film to become the highest grossing film in history (only recently surpassed by Avatar), all that talk about wasted money was flushed down the drain. Instead, we got near universal praise, a slew of Oscars, Cameron facetiously calling himself "King of the World", and a decade at least of the Célinian themesong showing up as a slow dance number at weddings and Bar Mitzvahs.

Seeing it for the first time, I didn't care about the studio costs, I just wanted a damn good film. I went in with the highest of expectations, and found instead a misguided melodrama, a clunky, contemporary setting for a framing device, a seemingly interminable running time, and (of all things) a gun battle on a sinking ship.

I'd not seen the film again since tonight, so I was eager to see if my dashed expectations had softened with age. I also wanted to see the 3D conversion work and digital presentation in a screening far better than the sordid, Northern Ontario multiplex I suffered through the first time. So, the fundamental question is, it is worth revisiting Titanic, in theatres for a limited time (coinciding with the 100th anniversary of the sinking)?

I'd suggest the answer is "yes".

We've learned a couple things in the intervening years, firstly that Cameron is completely capable of making an even more egregiously scripted if technically proficient monstrosity in the form of Avatar. As clunky as anything that Jack and Rose get up to, it's still miles better than the damn Na'vi prancing around with their prehensile penises. It was never a question that there are moments of sheer cinematic greatness in Titanic, the heft of the giant ship tilting up for its final plunge is one of the most iconic in cinema history. So too is what should be a completely ridiculous scene, yet one that's surprisingly earned, the "I'm flying" shot of the two leads, embracing the speed of the ship, arms outstretched as the ocean seems to rush towards them unencumbered. Lit with the auburn hues of sunset and a pale blue sky, it's the stuff that this film at its best is made of.

Then there's the good two hours of just mindless shit. Dance sequences that go on too long, preposterous, cigar puffing bad guys that get in the way of the upstairs/downstairs romance. As trying as the plot twists are, the dialogue is even more obnoxious. It's a miracle how Winslet is able to seem convincing while spouting the most banal lines, and it's no fault of Billy Zane that he's made to be some sort of pathetic plot device. Frances Fisher manages to also hold her head up.

Paxton has no clue what film he's in, and while I love the guy, he's almost comically bad in his role. DiCaprio, on the other hand, is downright smouldering with his chemistry shared with Kate. Yet, he too often suffers from being a mere game piece in the larger whole, but somehow manages to maintain his composure in ways that others don't quite seem able. We meet character after character that do little more than obstruct the film to extend a given scene, or stare off into space in shocked disbelief either at the sinking of the massive ship, or how bad the script really is.

Still, can one find charm in a film that has some fantabulous action moments, a ridiculously stunning leading lady at the height of her beauty demonstrating impeccable acting skills with little to work from? Sure, why the hell not.

There's a tremendous, tremendous film in there beneath the crap - one or a half-dozen less sequence running from locked gate to locked gate, shitcanning the overarching plot point of the nasty fiancée and his hired goon, and focusing on the love and the fear of thousands of people slipping towards a watery grave, and we'd unequivocally have a hell of a movie. We'll never get that Titanic film, alas, but there's enough on second viewing to at least remind one what could have been.

Alas, save for the conversion to stereography, the only other major change that Cameron made on this version was to fix the night sky after Astrophysicist Niel deGrasse Tyson snarkily (yet accurately) pointed out that the positions of the stars seen behind Rose and Jack weren't correct.

So, how does it hold up from a 3D perspective? There will be lots of hang wringing from the ignorant that still feel that post conversion is by nature a bad thing for stereography (see my Phantom Menace article for more on that). It's safe to say that the presentation is, for almost the entire 3 hours and 15 minutes, incredible. A few of the effect shots, in the pristine digital presentation, show their age, a couple of the digital characters populating the deck walking in a jerky kind of fashion that belie their animated origins.

The film by its nature is one of scope, and both the restored digital cleanup and the use of 3D space is a testament to the overall visual capabilities of the film. The underwater shots (mostly restaged) are fantastic, the sweeping cranes over the boat reveal the sheer massiveness of the ships construction. There are some missteps, a couple seconds of 3D ghosting and softness (very likely a condition of the original shoot) that mar the otherwise quite extraordinary presentation.

The screening room at my local AMC (in the "lieMAX" room) uses two Christie 2Ks to do its trick, making for a bright and consistent image. There are showcase scenes, such as when the giant props rise into the air for the last time, people falling into the far distance and banging off railings. But there are almost moments of greater subtlety, from the forms in the closeups to the textures of the clothing that are allowed to flow with a greater sense of depth. Frankly, this is about as good as contemporary live action 3D gets, and if you're still hating it, well, there's little left to convince you.

The sound mix, with the gurgles and creaks of the massive ship, played beautifully in the venue. The score proved to be even more dated than I expected, the cheesy harp-meets-electric piano sounds of Horner's score even more cloying. Still, when the strings sweep up, the vastness of the ship is conveyed in stunning dimensional space, and we have two gorgeous leads gazing lovingly at one another, it's difficult for even the most jaded to not be swept away.

Out of this re-release, we're likely to get a fabulous Blu-Ray that will hopefully include all the nerdy behind-the-scenes stuff we'd ever want, and it allows those that have only seen the film on a paltry screen to experience it with the scope it deserves. I freely admit to enjoying a larger chunk of the film than I did on first viewing, but it remains a troubled, often irritating whole.

Still, when things go boom, and the mighty ship rises up, I was able to turn off all cynical considerations and just revel in the fact that sometimes, at least for brief moments, the spectacle is more than enough to overcome any other faults.