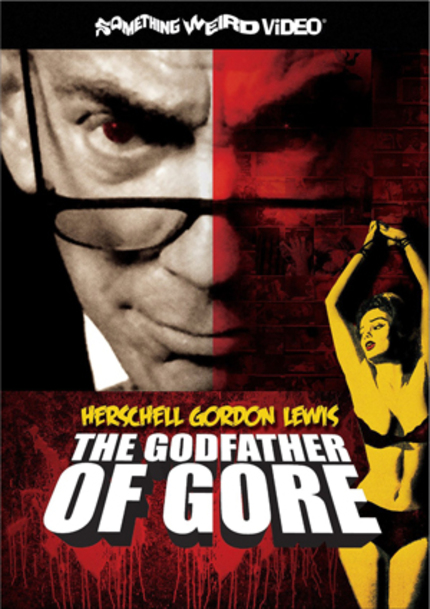 H.G. Lewis was the king of exploitation film making in the 1960's.  Most people today remember him for his creation of the gore genre, however, that was only a small part of what Lewis did.  Along with his partner, the late David Friedman, Lewis tackled every genre and possible angle for making money with films that you could think of. He practically invented the nudie cutie and the roughie, he also tackled current events like the introduction of the birth control pill in 1967, he was anywhere there was a buck to be made. Frank Henenlotter, director of such exploitation classics as Basket Case & Frankenhooker and the man behind Something Weird Video, has directed his first documentary, and he could choose no better subject than H.G. Lewis. Something Weird's presentation of Godfather of Gore isn't terribly glossy, but it is very complete.  The doc is chock full of great information and the disc has about 2 hours of extra material, all for a list price of $15, this is a definite recommendation.

Our very first documentary feature film featuring interviews with cast, crew and critics including John Waters, Joe Bob Briggs, David F. Friedman, and Herschell himself. The Godfather of Gore traces Lewis' start in the innocent bare-naked Nudie Cuties before he shocked the world with Blood Feast, the first-ever gore film! Lewis then continued to assault audiences with an audacious oevre of exploitation shockers! Packed with tons of clips, rare outtakes, and testimony from the people who were actually there, this cinematic homage will leave you laughing and screaming at some of the most amazing motion picture madness to ever play American movie theatres!

H.G. Lewis got into the movie business to make money, and make money he did. When he wasn't right behind the latest trends in exploitation films, like following Russ Meyer's seminal The Immoral Mr. Teas with his own The Adventures of Lucky Pierre, he was creating them, as was the case with Blood Feast. This documentary is told mostly through the eyes of Lewis and David Friedman, who were the twin forces behind Lewis' success. They worked together on every film up until Color Me Blood Red, when they had some kind of disagreement, which is not elaborated on in this documentary, and parted ways.  One could say that Lewis' films were never the same after that, but then again, his films were never terribly good to begin with.

One of the great things about Godfather of Gore is that it isn't an attempt to deify H.G. Lewis at all.  One of the benefits of its being made by Frank Henenlotter, is that Frank has had a very long business relationship with both Henenlotter and Friedman, so his point of view is less objective than most. Henenlotter brings a great sense of levity to the proceedings, even interjecting interview segments with himself into the documentary, explaining just how awful many of Lewis' films really were. Lewis and Friedman are also very candid about the material and more than happy to admit when they were making junk, it feels good to watch a filmmaking team acknowledge that it wasn't that there work was misunderstood, when the fact is that some of it was just bad.

On the other hand, Godfather of Gore is happy to point out Lewis' successes, and devotes plenty of screen time to the things that he did well. The largest chunk of screen time is taken up by the Blood Trilogy of Blood Feast, Two Thousand Maniacs, and Color Me Blood Red. Of the three, Two Thousand Maniacs is clearly the best film, and probably the best film Lewis ever made, and the documentary takes the time to acknowledge that. At the same time, they aren't scared to poke fun at the awfulness of Blood Feast, which is genuinely really bad. The one thing that Lewis was good at, was knowing what audiences wanted.  When giving them tits and ass got boring, he gave them blood, when blood got boring, he gave them more explicit tits and ass, and on and on.

H.G. Lewis was the first film personality who ever left me speechless. I met him at the very first Texas Frightmare Weekend, while wearing my Blood Feast shirt. I embarrassed the shit out of myself by purchasing the CD of the Two Thousand Maniacs theme and as I tried to walk away, Lewis tapped me on the shoulder and said, "Do you want me to sign that?" I felt like a complete idiot. He was kind and gracious, the complete opposite of the maniacs, drug fiends, and madmen he put on screen, and I think this documentary captures that aspect of his personality very well. I am very happy with this look at the career of one of film history's greatest showman and only wonder what took someone this long to make it!

Something Weird's DVD of this documentary is nothing to write home about in terms of video or sound quality, but then again, neither are the films being covered.  The aspect ratio changes every fifteen seconds, and most, if not all, of the archival movie footage is interlaced, which wouldn't be a big deal if they didn't freeze frame on interlaced half frames constantly. It's nitpicky, but I noticed it, so I thought I'd pass it on. It really is the content that counts, and that is fantastic. If you go into this documentary looking for pristine A/V, you might want to reconsider your motives.

The extras on Godfather of Gore are fantastic. The major part of these extras are an hour of deleted interview and anecdotal segments from the proper.  They all could have found a place in the film, but that would have made it three hours long, and that would certainly have been overkill. In addition to that, there is a rare nudie cutie short from Lewis called "Hot Night at the Go-Go Lounge", an HG Lewis trailer reel, which is almost worth the price of admission, and a photo gallery of promotional artwork.

This disc is a must have for any exploitation fan. Highly recommended!