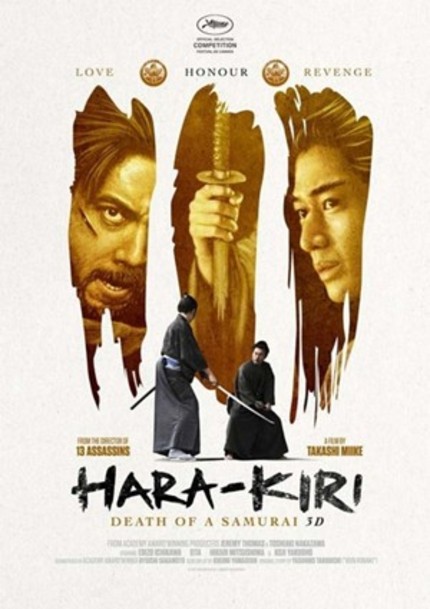 Takashi Miike might get away with remaking a little seen samurai flick like The Thirteen Assassins (1963), but Masaki Kobayashi's Harakiri is another story. The 1962 original, a masterpiece in pacing and storytelling, is a well distributed, widely seen and much loved classic. Among the probably audience for Miike's remake, comparisons will be inevitable and will be an unfortunate red herring to the surprisingly conventional film Miike has made. More than any other film in his career, Harakiri is a study in restraint that exudes a certain respect for the original. Unfortunately, minor added affectations don't serve the film well and the remake can't hold a candle to Kobayashi's perfection.

Titled Ichimei ("One Life") in Japanese and Harakiri: Death of a Samurai, the film is loyal to the structure of the original. The film opens with Hanshiro (Ebizo Ichikawa), a penniless ronin, requesting an audience for his own ritual suicide in the ruling House of Ii. During this unprecedented time of peace, unemployed samurai boast the valor of wanting to die with honor by means of hara-kiri, but many are simply looking for the sympathies of the ruling clan and an easy payout. The retainer in charge (Koji Yakusho) assures Hanshiro that they do not take bluffs, and tells him a story about one such young man looking for a payout who became a brutal example. Hanshiro is not bluffing, yet his true motives are also not to slit open his own stomach. Hanshiro has an example of his own, and, through a story of his own, he unspools a plot of vengeance that the on looking samurai will see play out right before their eyes.

Harakiri relies on a pattern of flashbacks to carefully plot an in-the-moment suspense. As we weave back and forth from past to present, the tempo is increased with each adjustment back to the present until the final reveal and the cathartic showdown. But Miike lingers a little too long in some of these spiels and shows his hand a little too early. As if he doesn't trust the audience to fit the pieces together, portions of the mystery are spelled out a little too clearly and even repeated as an unnecessary point of punctuation. The film sags in the middle, getting sidetracked with melodrama and the charm of child actors, to the point where it loses the pulse of dramatic tension lingering in the present.

Miike is a director known for his madness, and he has made very few films that don't tip the crazy scale at least once if not a half dozen times every minute. The fact that Harakiri is almost completely devoid of his signature is both impressive and disappointing. 13 Assassins and even Audition are both brilliant examples of the kind of control that Miike can wield as a director, but that doesn't stop him from unleashing a stampede of dynamite armed bulls or slicing off appendages with piano wire. Harakiri has none of that, not even one spraying fountain of blood. In one of the most grueling scenes of the film, I was ready for a predictable display of entrails or a visceral gush of bodily fluids, but it never happens. Harakiri, like the original, is a thinking man's action movie, that, prior to seeing it, I would have said Miike wasn't capable of. It is also a bitter irony for fans that one of Miike's least eye-popping films has been shot in 3D. The most dimensions you get are in the title's initial overlay over a painting. Perhaps this is where Miike's playfulness is hidden--within contradicting the market's must-use gimmick.

Harakiri is a fine period piece that works best when seen as homage to the original. The production is top notch, with competent acting and beautiful sets. But after years of expecting and receiving something else from one of Japan's most unique directors, Harakiri is a disappointment.

Hara-Kiri: Death of a Samurai