London 2011: NOBODY ELSE BUT YOU Review 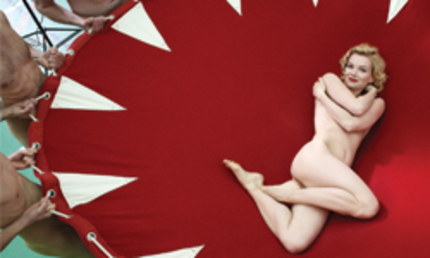 Even though she died nearly 50 years ago, Marilyn Monroe still holds a fascination for many film and conspiracy theory lovers. Director and co-screenwriter Gérald Hustache-Mathieu's film Nobody Else but You is a relatively light neo-noir thriller, with rather bizarre twists and a strange semblance to the life of the famous dead American blonde movie star. Combining mystery, noir, sex and more than a little French eccentricity and joie de vivre, the film, with general success, puts obsession under a microscope

David (Jean-Paul Rouve) is a crime writer, come to a small town in the coldest part of France to collect an inheritance from an estranged uncle. He stumbles upon the recent mourning of the death of Candice (Sophie Quinton), a local celebrity, whose work as the face of the local cheese and the weather-girl made her an icon of sex and beauty in this seeming permanently snowy corner of the country. David, seeing potential for a new book, ends up investigating the suspicious death. This being a small town, everyone has open secrets that they are reluctant to reveal. David finds Candice's diaries, and finds her life of sudden discovery, modeling, love of a violent man, love of a smart man, love of a prominent politician, and all the while Candice struggles with self-esteem and the difficulties of fame.

Being such a clear parallel might put a film in danger, but Hustache-Mathieu and co-screenwriter Juliette Sales manage to keep the film moving along at a fair clip. Most of the time, the film finds its home is funny quirkiness, with David as a fish-out-of-water in this town of isolated strangeness. At first, his investigation is for his own gain and ego; he has hit a block, and this might he last shot for a successful book. The string of coincidences follow not only Candice's life, but his investigation as well, which it seems someone is trying to stop in a rather homicidal fashion. But keeping these attempts darkly comedic instead of just dark allows the viewer to laugh at its absurdities. It's a good choice, as a dark-toned film might have been laughable in an unkind way. The further David delves into Candice's life, the more he cares about her, until she eventually invades his dreams.

Calling it a neo-noir might be a bit misleading, as the snow aids in painting the town white - but as white is the absence of colour, it is a reminder of the absence of Candice. Warmth is only to be found in the strangest corners, and even Candice could not bring warmth into her own life. The film becomes a bit more serious in its third act, and as a consequence drags a little. As it becomes easier for the audience to piece the clues together, the story really needed to speed up a bit. Luckily, Rouve has great deadpan comedic timing, and makes David a strange combination of interesting and mildly annoying to keep the audience interested. Overall, the film is a strange delight, with a great soundtrack to match.