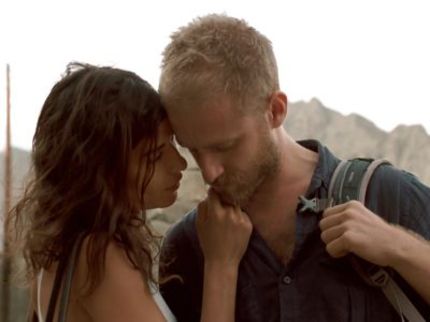 Cartography is a strange discipline these days. With the physical geography of the world long since mapped (though that may change with global warming,) most cartographers are either concerned with political lines, or with incredibly detailed satellite imaging made possible by current technology. What can we learn from a map? What is the correlation between the lines on a map and the road you take? And are the maps of our lives, our souls, written on our faces and bodies? Director Braden King explores these questions in his slow, quiet, and strangely moving film, Here.

Will (Ben Foster) is an American cartographer hired by the government of Armenia to take detailed images of the landscape for purposes that might not be quite above board. Gadarine (Lubna Azabal) is an Armenian photographer who has been away from home, and now back on a grant to take pictures of the countryside. Though both are fiercely independent, they somehow end up travelling together, engaging in debate and romance.

King's previous work as a documentary filmmaker can be seen in Stan Brakhage-inspired moments that punctuate the narrative, moments of surreality that add to the surreality of the space within which the narrative exists. The narrative itself is a fairly standard road-movie-plus-love-story. But a road movie of a different kind: the country is small, and so the pace is small. At times, this is a bit frustrating. But the film is meditative as opposed to rushed. In fact, the film works in best in its more experimental and small moments, ones where the audience is creating their own map. Allowing the audience to make those maps, as oppose to mapping the story for the audience, is when the film works; when it lapses into the standard American-indie film of two people talking (which it does several times,) it loses its uniqueness. Working within a country such as Armenia, with its difficult and largely unknown history and uncertain future, grants the surreality and evasiveness of the good moments. King's strength and past as a documentarian lies in them; when the moments unfold before us and we put the pieces together.

I am almost hesitant to praise Azabal; I want her to remain an indie film secret, such is her incredible strength as an actor. And she is matched by Foster, of whom I know little. They have an easily believable chemistry, and yet neither panders to typical Hollywood-style romantic behaviour. On the surface, their characters seems fairly knowable and predictable; she is the independent girl still trying to break away from parental control and national identity; he is the loner, choosing a career that fits this and yet longing for a connection. But their presentation in this film is unusual, especially in the road film mode. As Gadarine is Armenian, her map is revealed as the journey progresses. But Ben is a stranger in a strange land, and it with great trepidation that he begins to reveal his map. Gadarine must be patient, and must examine his behaviour to try and interpret his semiotics. And while no human is completely knowable, Gadarine and Will begins the process of a new map-making.

While the film falters at points, King's incorporation of avant-garde and documentary film techniques pairs well with the road movie. Filmmaking is similar to cartography, in that each must make detailed maps of landscape and inhabitants to create a map of humanity. By drawing attention to the filmmaking process and the texture of film (did I mention this is a 35mm film? rare these days, and beautiful to watch,) King asks the audience to examine our inner cartographer and cartographibility.