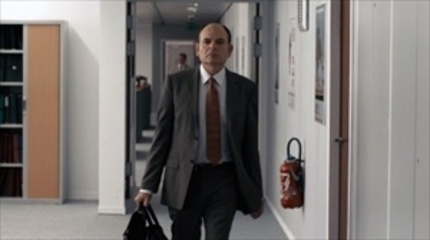 Early One Morning (De bon matin) opens with middle-aged banker Paul Wertret (Jean-Pierre Daroussin) entering his office as normal before shooting two of his fellow workers dead without hesitation. Through a series of flashbacks as Paul sits at his desk, awaiting the inevitable police arrival, Jean-Marc Moutout's painfully sad film explores what has driven this ordinary man to an act of horrifying violence. In examining the frailty of the male psyche, Moutout casts a damning eye over the banking system and ultimately presents a profoundly upsetting drama of one man's frighteningly rapid collapse, from success to oblivion.

Paul Wertret is ostensibly a good man - loving husband and morally grounded businessman. We slowly see the ground pulled from under him by the arrival of the recession, and with it a new brutally results driven senior management led by the slippery Alain Fisher (Xavier Beauvois). As he struggles with work pressures, so too his family life is put under considerable strain with a fed-up wife and a teenage son who won't speak to him. Eventually the story catches back up to the careful preparations he makes on the titular morning. Crucially we see these preparations at the very start of the movie, so it's explicit from the outset that Wertret's attack isn't a spontaneous outburst of rage, but rather a pre-meditated act. The result of a lengthy psychological onslaught and some considerable planning, it's all the more disturbing.

Jean-Pierre Daroussin's performance is wonderfully understated and deceptively affecting. Wertret isn't an easy person to like (he's a banker after all) but by the closing frames, a tidal wave of sympathy will have crept up on you. Repressing his emotions, he keeps up the facade of normality for the most part and in doing so dooms himself. Plagued by an inability to articulate his anguish in constructive ways, he's limited to misplaced verbal outbursts and solitary drinking. In a particularly tragic moment, we see him retreat to his sailing boat (a location he associates with happier times) and in a state of maudlin intoxication call an old friend he hasn't contacted for 26 years. It's a truly heartbreaking instance of Wertret desperately reaching out, but completely misdirecting his SOS call. It's moments like this where Moutout's unshowy direction gives the actors space to breathe and the movie takes on an intense observational gaze.

There's something fascinating about Mertret's almost primal response to losing control of his life, hiding then attacking, as the simmering angst comes to a head. He talks of 'protecting' his family and loves them more than he could ever express, only compounding the unfolding tragedy. A dog-eat-dog world indeed.

A lengthy final shot scolds those responsible for Wertret's demise, the colleagues complicit in his downfall. It's an angry and, ironically, beautifully articulate piece of visual commentary that allays any doubts that this is a hugely impressive film. Subtle, passionate, restrained, topical and moving.
Sign-In to Vote
Tweet Post Submit