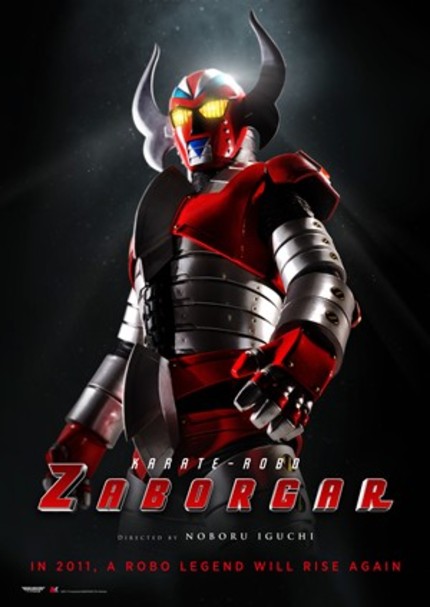 By most objective standards, the films of director Noboru Iguchi (Machine Girl, Robogeisha) aren't very good. Their mix of low-budget gore and lowest common denominator slapstick sit side-by-side with flabby pacing and broad, generally goofy performances. But then that's almost kind of the point--the appeal: these are low-budget, goofy, slapstick films for people who like the same, made with a shocking level of exuberance. Make no mistake--these aren't the faux-cheapie films Todd rightly railed against recently: these are movies which maintain an uneasy union between talent, resources, and ambition. If you're the kind of person who can't appreciate that type of movie, I'd advise you to read no further because there's nothing else for you here. If you're like me, however, then the charms of Iguchi's newest release, Karate-Robo Zaborgar may be of interest to you.

Karate-Robo Zaborgar is a revival of a 70's series by the same name, where a young man with a transforming motorcycle would battle all manner of robots and monsters. The twist with Iguchi's reinvention is that series lead Daimon (Yasuhisa Furuhara) is recast here as a very intense karate expert who has an unhealthy attachment to Zaborgar, his robotic crime fighting partner. Both boy and robot hate the cyborgs that periodically show up and kidnap public officials to steal their DNA: their leader, the wheelchair-bound Dr. Akunomiya, killed Daimon's father with rockets. Understandably, he'd hold a grudge.

The first half of the movie concerns itself with Daimon's clashes with the slinky Miss Borg (Mami Yamasaki), who slowly comes to understand this crazy thing humans call love. Unfortunately, things don't go well in the karate expert/cyborg union and the back half of the film involves down on his luck Daimon (Itsuji Itao) struggling 25 years later to figure out what to do with himself. There's also a giant, rampaging mechanized school girl, zoom-in's on insulin shots, and that terrific horn/guitar music that marked many of the Japanese TV action epics of that era.

I've described the movie to you as best I can without walking you through it scene by scene. I can't communicate the infectious enthusiasm on display: but you get the feeling that Iguchi and company are excited to have access to cameras and funds to make movies. There's a kind of alchemy in that which might not fix the flaws in the production, but somehow, on balance, mitigates them. You'll go into this movie knowing whether you'll like it or not--that's unavoidable. But if this is the kind of movie you're into, I'd advise you to check it out.

Karate-Robo Zaborgar is screening as part of the 37th Seattle International Film Festival. You can find out more about the festival at its site.